Why be a Covidiot when you can resort to the idiot box, asks Twinkle Khanna

Cue up her lockdown watchlist (and survival guide)

This pandemic, perhaps because its origin allegedly lies with bats is turning all of us a little, well, batshit crazy.

Loneliness, despondency and anxiety is being manifested in increasingly bizarre ways. Just last week, a teenager in Karnataka decided to smuggle his best friend into his apartment in a big black suitcase. The neighbours got suspicious, when wheeling the suitcase in, each time it hit a bump, the contents began moving. The police were called and the cat, or in this case, a full-grown human was out of the bag.

Mild lunacy in the form of incessant TikTok videos is also on the rise, along with people making tutorials they feel the world desperately needs. It doesn’t help that this is done with the same earnest zeal as if they had come up with a vaccine against the coronavirus and not a ‘how to braid your hair in three ways’ video.

Even Tom Ford has a tutorial floating in the abyss where he shows people how to use eyeshadow, which he randomly smacks on with his fingers, while drinking green juice and talking about his colitis.

Being someone who is easily influenced, when I began having urges to pack large members of my family into medium-sized Samsonites or to post videos of how to make a Strawberry Pistachio Tart, I forced myself to quietly sit in front of the idiot box instead of turning into a Covidiot.

Here is what I used as staples to hold my fragmented sanity together: 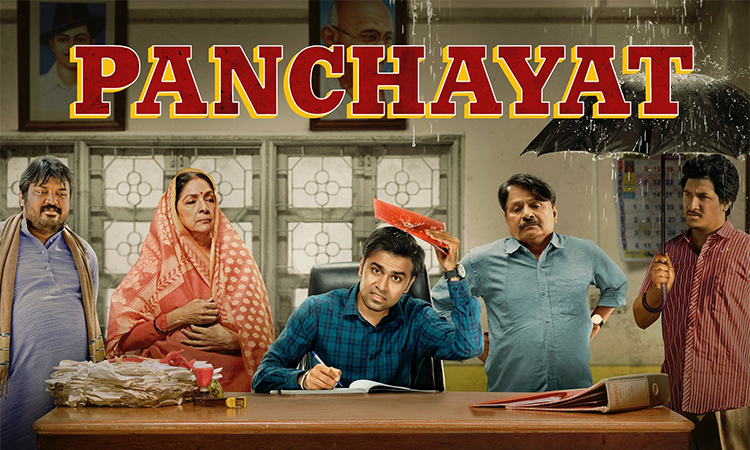 “You know they are obsessed with our family?” my sister asked after I began watching this delightful show on her recommendation.

“Don’t be silly, just because the Pradhan has a daughter called Rinki and his ringtone is, ‘Rinkya ke papa’ ? You are not the only Rinke in the world you know!”

Since only sisters can hurl nuclear weapons at each other and come away unscathed, she snorted, “You moron, I know that. Stop acting so superior all the time, dumbass. Just keep watching and you will realise that I am right!”

After this highbrow banter, I went back to my show where the protagonist, Abhishek Tripathi, is a man with ambitions that seem to outpace his abilities. He reluctantly settles for a job in Phulera as the secretary to the Pradhan, Manju Devi. But the panchayat is actually run by her husband who has adopted the title of ‘Pradhan-Pati’.

This small village has a bhoota ped — a haunted tree, that the villagers believe runs behind them and a thief who robs a computer monitor and returns it once he realises that it is not a television.

There is a wedding where the offended bridegroom has a litany of complaints starting with receiving a mithai box with only five sweets and not the special box which has seven sweets including one with silver vrak.

One doesn’t see the bride, though there is a passing reference to her existence with, “What is that bride’s name, Kareena or Twinkle?”

My little one giggles, “Mom is that you?”

I dismiss this with “No, some other woman, who has been saddled with this unfortunate name.”

It is only when we get to episode seven, that I have to concede my sister is right. This one is dedicated to a man wanting to register a birth certificate for his son. In the middle of the pandemic, we have temporarily forgotten about the NRC and CAA in whatever chronology, but this gentleman is not taking any chances.

“Atmaram” he says is the baby’s name and is then asked to choose the more ‘modern’ Aarav. The real Aarav sitting beside me on the couch gets increasingly bug-eyed as the entire episode turns into a twisted homage to him. “It is a good name. It is Akshay Kumar’s son’s name,” the father is told.

Most of the episode revolves around a fight between the parents of the newborn about what sounds better, ‘Aarav ki mummy’ or ‘Atmaram ki mummy’.

The funniest bit was about an upheaval in the village because of a government-issued slogan. Four children possibly being the norm in Phulera, Tripathi is compelled to get a slogan painted that states — “Two children are as sweet as pudding, more than that can be as painful as piles.”

The villagers are understandably upset because as one man says, “So more than two children is like having piles? My Pintu is piles?”

This simple, heart-warming show made me feel like I was the one that had been handed the box with seven sweets. Led by quirky writing and a stellar cast, it is Raghuvir Yadav as the Pradhan-Pati who, in this ensemble, turns out to be the special mithai, the one gleaming with his very own silver vark. Watch on Amazon Prime

There are times when you want a barfi, but this one is for the day when you want to stuff your face with a McDonald’s Happy Meal, as the protagonists are as oily as the fries.

Joe Exotic, a mullet-sporting, polyamorous, zoo keeper has a long standing feud with Carole Baskin. Baskin runs a wild life sanctuary, has a penchant for flower crowns and is suspected of murdering her second husband Don Lewis, and feeding him to the tigers.

Her current husband, a Prince Charles doppelgänger, is seen in their wedding portraits on his fours, sporting a dog collar. Though the battle between Joe and Baskin is about the well-being of the big cats, it is unclear if there is a single person not out to exploit the animals.

Then there are Joe’s two husbands crazed out of their minds on meth, FBI agents, hit men, con men and even another zoo owner Antle, who calls himself Bhagavan and has a cult of underage women. If a calorie-free junk fest is what you are looking for, then you could grab hold of this tiger by its tail. Watch on Netflix 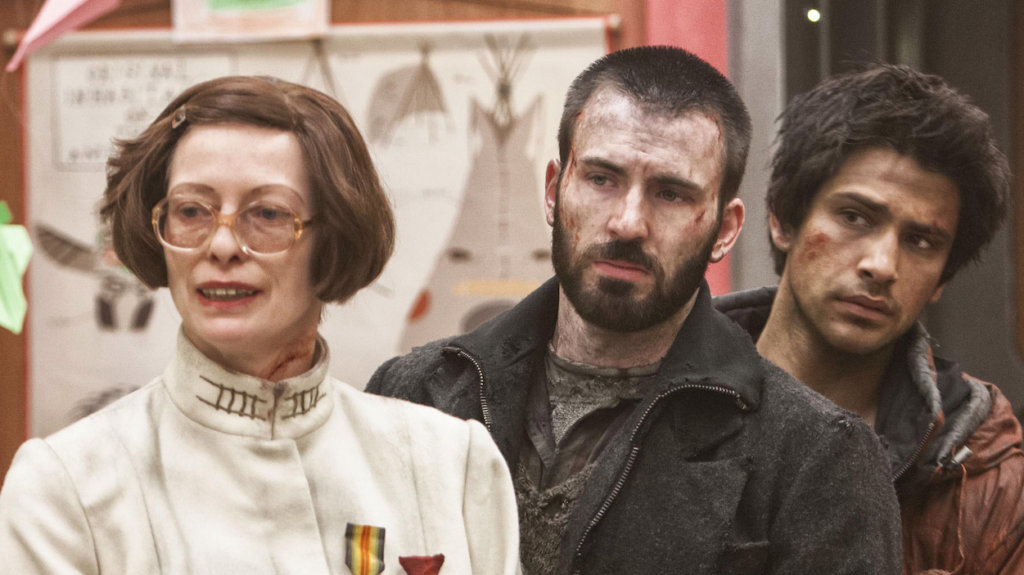 While everyone is raving about Bong Joon-ho’s Parasite, his 2013 movie about survivors going around the planet endlessly in a narrow train and an enforced social order is equally fascinating. The protagonist of Parasite and I suppose a perennial in all Joon-ho’s movies, Song Kang-ho makes an appearance in this one as well, as a security specialist, addicted to an inhalant called Kronole.

The inhabitants of the back end of the train are fed gelatinous bars of processed cockroaches, while the passengers at the front have elaborate feasts. The narrative revolves around a revolt led by Chris Evans to topple the revered engineer who rules this mechanical world. An allegory of our times plated and served as a fantasy, this is a compelling watch. Watch on Netflix

Lee, Evelyn and their three children communicate primarily in sign language as there are predatory creatures waiting to swoop in at the slightest sound.

In a movie where nerves are stretched taut and the soundtrack so silent that you can hear your heart pounding faster and faster, it is a story that is narrated primarily through facial expressions.

Panic-stricken eyes, lips pressed together to hold back screams convey more than mere lines. Deeply affecting, this is a horror movie where the monster is irrelevant. It could be a winged predator, a terrorist or a virus, because the thread holding it together is the shared experience of being a parent and protecting your children from what lurks outside. Watch on Netflix 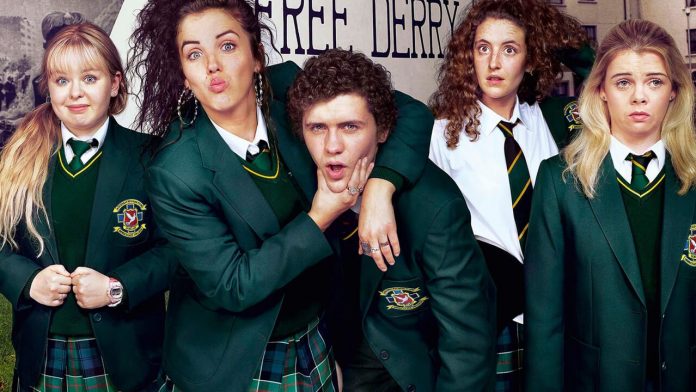 Confined to a town in Northern Ireland in the 1990s, Derry Girls revolves around five teenagers. A show about four girls and Jack, the first and only boy admitted to an all-girls Catholic school, this is an unlikely contender for an experience that feels at once unique and universal.

I watched this with my entire family and though l had to cover my little one’s ears and her eyes at many bits, this was a show that made us laugh even on days when we had all been squabbling.

Bathroom humour and blasphemy walk side by side, often holding hands through this show.

There are miracles with weeping statues, Jack urinating next to a deceased nun during detention, priests with great hair and a dog that may or may not have risen from the dead.

Derry Girls deals with failures and not just successes, but it is more about the close-knit bonds that hold people together in the worst times. Watch on Netflix

Sitting on the couch with my family, as we binge watch both seasons of this show, I come to a realisation that holds true for the Derry Girls as well as all of us. Though we may have to fight the urge to pack them off in suitcases at this point, in this flying trapeze act that we call life, it is our families that function as a safety net. Dappled below us and always there, they make sure that even when we fall, we never quite hit rock bottom.