She thought she’d found love online. Until her fiancé became her blackmailer

For those who’ve been keeping up with the latest season of The Kardashians – even if everything you’ve learned about it is against your will – you might be familiar with the saga of Khloe and her baby daddy, Tristan Thompson. The first episodes of the show revolve around the family’s discovery that Thompson, who’s been caught cheating before, was expecting a baby with another woman. In a bombshell reveal, Khloe and Tristan had been secretly engaged and were also expecting a second child via surrogacy (here’s how surrogacy works in India).

Desperate to make sense of her trauma, Khloe does an MRI scan, revealing the trauma patterns that affect her brain. For viewers, it’s as frustrating as it is sad. How could she not have seen this coming? Will she ever find happiness? And why did she stay?

The same questions leap to mind when you hear the story of 46-year-old Nandita Chakraborty, an author based in Melbourne. “If I were a cat, five of my lives are done,” says Chakraborty of her memoir, Dirty Little Secrets. She’s not just talking about a terrible mountaineering accident and a subsequent coma. In fact, she considers that moment a new lease on life.

Even before the physical damage to her body and brain, Chakraborty went through years of emotional trauma that left just as many scars. An abusive relationship followed by a fiancé who ended up being a scammer led her to question her own sense of self and judgement. A fall from a mountain or from grace are both painful in their way.

Unfairly, trauma itself is a risk factor in further abuse — leading to cycles where victims of abuse can’t seem to stop falling for abusers. While it’s not the victim’s fault, Chakraborty believes her definition of love needed to change before she could break the pattern. This is her account of coming out on the other side, and how not to find yourself caught in a scam (or if you already have been, here’s how to get your money back).

Everyone talks about compromises in marriage and love. I was willing to give it a go because it was love. The dealbreaker was when I found out he was getting married behind my back. I saw him with someone else on Orkut.

But the culture we’ve grown up in forces us to think marriage is the right solution. I was so caught up in that because everyone around me was getting married. I felt, maybe I’m going to be out of date soon, I don’t want to end up alone.

In my 30s, from a conservative Bengali family, I was under pressure to get settled. My mom and dad have been securely married for 45 years. So that gave me some hope to put myself out there on an Indian matrimonial site.

There I met a Scottish guy from Texas, Sam. He wanted to settle with an Indian woman, and I thought this would suit my family. He was sending me letters and flowers, within one week. I thought it’s amazing, what a woman wants.

After three months, he brought up marriage. In an arranged situation, you just get into it. I spoke with his sister. He claimed he belonged to a political family and his parents had died in a car crash. My friends told me to play it cool but this is what I needed and wanted.

Then one day, I got a call from his sister asking about him. I hadn’t heard from Sam, he’d told me he was flying to Europe for work. Forty-five minutes later, he called, saying he’d been mugged and lost his passport. He asked for 200 euros. I didn’t think anything of it, it’s not that much money. Then there was radio silence for a week.

By that time, we’d decided that our families would meet. I’d been introduced to his sister over the phone. I had an address, photos, I knew where he worked. I wasn’t just being naive, this was my fiancé. So when he called after a week and said he’d been kidnapped at gunpoint, I was scared. His sister called me crying. He needed 4,000 euros this time. I said I worked as a bank clerk, I didn’t have that much money.

I immediately called his sister and someone else picked up who sounded similar to Sam. His sister called me back and said it was a cousin, but from that point, my mind was unsettled.

I shared this story with a colleague. The next day, she sent me a news clipping about a man who’s been scamming people saying his parents had died. I thought it must be a coincidence. There was no picture and I’d seen Sam on video call. The truth is, I didn’t want to believe it. I didn’t want to be alone. I wanted to shut out the gossip.

When he finally returned to Texas and reached out to me, I confronted him with the article. That’s where I think I made a blunder. He got defensive, and two weeks later, he began to blackmail me.

People ask if I regret sending Sam intimate photos. I don’t think so. People still do it. That’s the hurdle of a long-distance relationship, I just went with my heart. What really was difficult was someone breaking that trust. He said: Track as much as you can, you’ll never find me. In the meantime, I’ll make your life hell unless you pay up.

He did make my life miserable. I went to the police, showed them my phone with all those pictures. I had to have blinkers on. They said it happens everyday, and the more I got involved, the more harmful it would be for me.

People were not crime-shaming, they were victim-shaming. They made it my fault, that I should have been more careful trusting someone online. Had it worked out, they still would have said I told you so.

I want women to stop blaming themselves. As soon as you know someone is a scammer, don’t worry what others think. Go to someone you trust. Report the scam to the police. Don’t give him any idea you know. 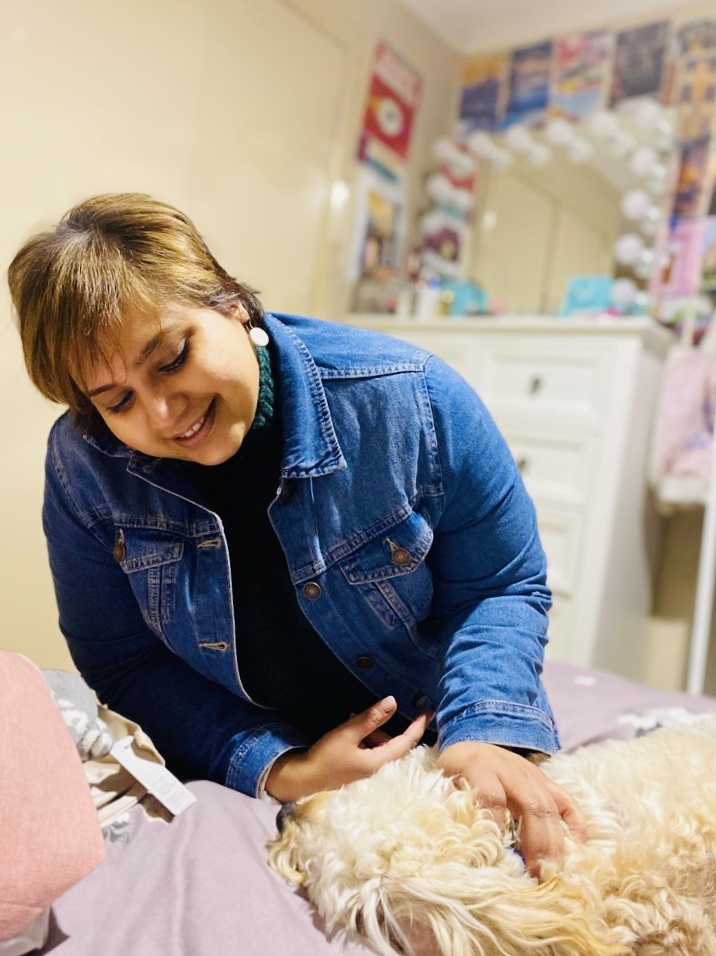 Scammers can sense vulnerability in your voice. As soon as you say you’re ready to break a rule for them, they’ve got you. The first slap is always like, sorry, it won’t happen again. Both, my abusive ex and the scammer, saw that I’m a romantic. They tapped into that. Now, no one can step over my boundaries.

Be careful about what you put out there, what you’re giving of yourself, but don’t give up on love. I’m happy now, writing, meeting new young people, creating. That’s become my life, and the definition of love has changed. I’ve found my love.

Yes, I paid a huge price. Rumi said light enters into the wound. If there is light, there has to be dark as well. I have no regrets. Whatever I did, I did wholeheartedly.