In December 2018, a few sections of society were horrified when spiritual leader Morari Bapu invited 200 sex workers from Mumbai’s red light district of Kamathipura to Ayodhya, where he narrated the sacrosanct Ram Katha to them. The gesture of inclusion kicked up a fuss, with critics opposing the presence of “such women” in the “pious town of Ayodhya”. They suggested his storytelling activities be restricted to Naxalite areas (a misunderstanding of the term ‘red light’, perhaps?) and brothels.

Despite coming under attack, Bapu didn’t quit. In fact, he upped the ante by officiating the marriage of two sex workers in his ashram on November 14. Earlier this year, the girls were rescued and rehabilitated by a Mumbai-based NGO. It was a joyous occasion like every other marriage this wedding season, and the young women married grooms from Jamnagar and Upleta in Jamnagar, in the presence of the parents and over 100 guests. 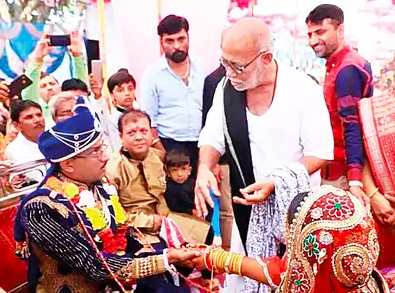 Bapu was making good on his December 2018 promise that “any girl who is in this profession and wants to get married will be given the opportunity to tie the knot if suitable grooms are available”. At the wedding, he made sure to appreciate the men and their famillies who braved social ostracism. “I appreciate the boys and their families who accepted these girls,” he added. “It takes a lot of courage.”

The story takes me back to my childhood when one of my neighbours raised a lot of eyebrows and faced massive backlash from our society and his ‘friends’. He was 20-something when he fell in love with a bar dancer in Mumbai, and had to battle with a series of local ‘dalals’ and ‘bhais’ for over a year to rescue her and married her. It certainly helped that his mum was supportive and welcomed the couple without any melodrama.

Though it took a while for everybody to warm up to her, today she runs her own dance academy and most kids in the neighbourhood look up to her.

It’s a pleasant reminder that you don’t need to be Wonder Woman wielding the Lasso of Truth to effect positive change. Small acts of kindness and inclusion can change someone’s life and offer them a future they might have given up on.

Like Bapu, who sought to change the stigma around sex workers by declaring them “his daughters”. “During Kanyadaan, I told the boys their responsibilities have increased. These are Morari Bapu’s daughters, so please take care of them, give them respect.”

WATCH NOW: Why grandparents are the coolest