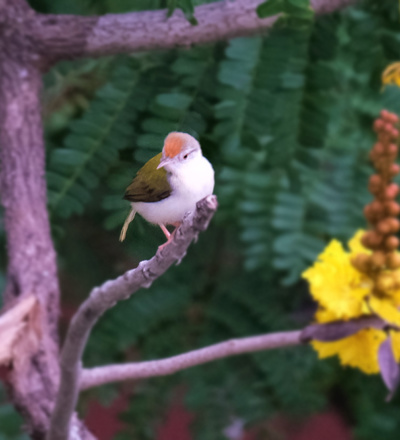 Had enough of Netflix and chilling? Try birdwatching in the city

A beginner’s guide to the beautiful birds in your neighbourhood

Commutes are boring. Especially when they’re limited between your bedroom and living room. We have something that could help. Your balcony, if you’re lucky enough to have one, or window, can be your, err, window to the great outdoors.

We’re not joking. Look carefully, you’re likely to find a lot of local wildlife that you’ve been far too busy to notice. And we’re not talking about the stray cats, dogs, and people who refuse to follow social distancing norms. Though watching their antics can be fun.

We’re talking about birdwatching in the city. Look past the crows and pigeons, and you’ll see a stunning variety of colourful feathered friends hiding in plain sight.

While we at Jokotta Discoveries specialise in the most unique nature-focused experiences from around the world, this is one trip you can take without leaving home.

We’ve listed out some of the beauties you can spot across India while birdwatching in the city. Just for the record, we’ve left crows, pigeons and other common birds like mynas and black kites off our list.

Wherever you are in India, if there are native trees around you, you can probably spot some or all of these.

Superstars to look out for when birdwatching in the city

Coppersmith Barbet: This cute colourful little bird enjoys visiting fig trees with its friends and sunbathing in the early morning on treetops. With a brilliant red head to blend in with the fruits and a bright green body that can be confused for a leaf, it would be all but invisible.

Except that they let you know they’re nearby, with the characteristically loud metallic tuk…tuk…tuk (yes, like a Coppersmith at work).

Purple and Purple-Rumped Sunbird: While Purple Sunbirds are seen all over India, their Purple-Rumped cousins prefer central and south India. At under 10 cm long, these birds are tiny. And they move fast.

The males are brightly coloured while the females are mostly olive or brownish. Purple Sunbird males have an all-purple head, but for the Purple-Rumped ones, the splash of colour is hidden under the wings.

Common Tailorbird: These tiny brightly coloured songbirds will be heard before they are seen, thanks to their loud cheeup-cheeup-cheeup calls. They’re genius nest builders. They pierce and sow together the edges of a large leaf with plant fibre or spider silk to turn it into a cradle. And they build their nests inside that. Tailoring at its best.

Indian Golden Oriole: Once you see this bird, you can’t confuse the bright yellow plumage for anything else. The Golden Oriole is the original winged-eye makeup specialist. It is spread wide across the country in urban and forested areas.

These birds are strong fliers and can hit speeds up to 40 kmph. They don’t enjoy prolonged baths but fly repeatedly into small pools of water.

Asian Koel: A common symbol in Indian poetry and Bollywood songs, this cuckoo bird is also loved by German clockmakers. The artist’s muse produces distinctive sounds that you’ve definitely heard even if you haven’t seen it.

It is large, long-tailed, with the male being a glossy bluish-black with crimson irises and a pale bill while the female is dark brown with white spots.

Dusky Crag Martin: This tiny bird from the swallow family enjoys nesting under ledges on cliff faces, old forts, tombs, bridges, and archways. Watching them fly is an absolute joy because they use standing waves in the airflow near vertical surfaces to hunt.

They zip fast and have an incredibly tight turning radius that will make you dizzy as you try to keep an eye on them. And it is almost impossible to see one sitting down.

Scaly-Breasted Munia: You’d be forgiven for mistaking it for a sparrow at first sight. But a second glance will tell you that the distinct colouring and markings make it very different. This bird can form flocks of up to 100 individuals and is seen everywhere except the north-west region of India. It’s about 12 cm long with a stubby dark bill, and brown upper-parts and underparts that are white with dark scale markings. Hence the name.

Green Bee-Eater: When birdwatching in the city, wake up early or keep your eyes peeled at dusk if you want to see this bird dive from an open perch, zig-zag through the air, catch an insect, and then return to its perch.

It will then eat the insect after thrashing it to break its exoskeleton. Yum.

Or you can admire its vibrant green plumage tinged with blue. It also appears to be trying to mask its identity with a black band around its eyes.

Red Vented and Red Whiskered Bulbuls: The red-vented bulbul looks slightly punk thanks to the crest on its black-hooded head. Its calls sound like it’s saying ‘ginger beer’, but we don’t recommend anything except water for it.

The red-whiskered bulbul is very punk with a tall pointed crest. Along with the red patches on its face, it sports an imperial thin black moustache line. It has one of the sweetest songs of all urban birds.

Oriental Magpie-Robin: This bird from the Old World flycatcher family is a distinctive black and white. During breeding season between March and July, the males sing from high perches, puff up feathers, raise the bill, fan their tail and strut. In Hindi, it was often called saulary, which means “hundred songs”.

Black Drongo: This beautiful glossy black bird has a distinctive forked tail. It’s also aggressive and fearless and will attack much larger birds like eagles if they enter its nesting territory. Many birds even build their nests in the same tree because they know that the drongo will protect them. It’s found perched conspicuously all over the country and also accidentally visits Japan.

Alexandrine and Rose-Ringed Parakeet: The alexandrine parakeet is one of the largest in the parakeet family and can grow up to 24 inches. It has a massive red beak, a red patch on its shoulders, light blue-grey cheeks but is mostly green. More common is the rose-ringed parakeet, named because of the distinctive red and black neck ring on the adult male.

Both birds can mimic human speech and generally make loud noises in groups, thus mimicking human behaviour. Of the two, the rose-ringed parakeet gleefully ignores immigration laws and has successfully colonised Germany, France, Belgium, the Netherlands, Italy and the UK.

White-Spotted Fantail: Found largely in central and peninsular India, this is a fantail flycatcher with a white throat, spotted breast, and a white belly. It has a melodious song that variously ascends and descends, and its courtship display includes fanning out its tail at about an 80-degree angle and dancing in the rain. Watch out, female fantails!

Begin birdwatching in the city by making the trip to your balcony or window. Stare at the native tree close to you, and look for movement, listen for the sounds, keep your eyes peeled for flashes of colour. Before you know it, you’ll be spotting these coloured wonders by the dozen.