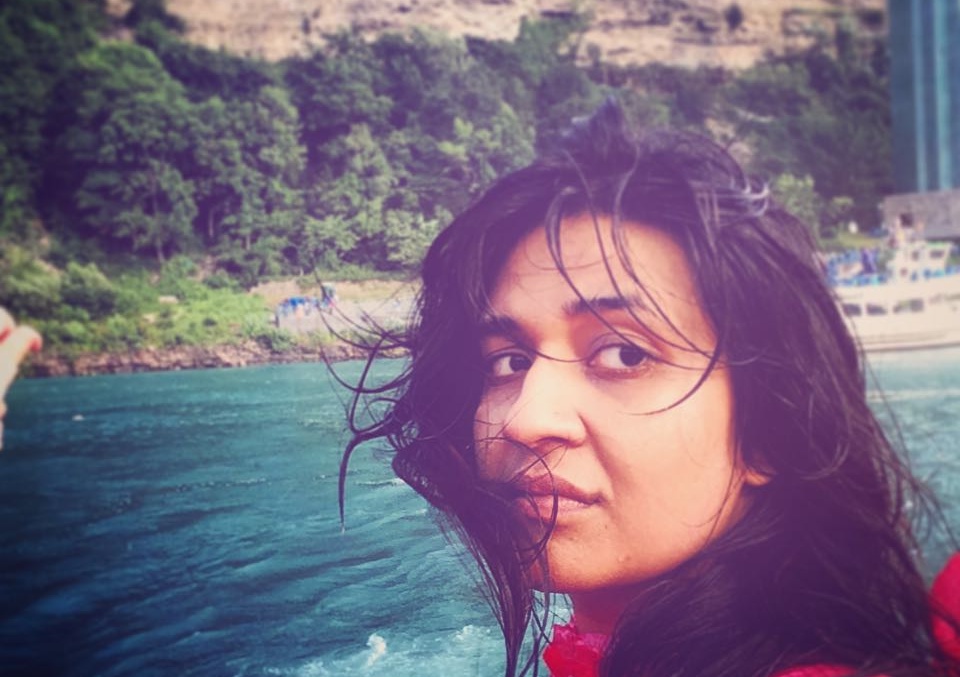 "I befriended my scammer and got my money back, when even the cops and banks asked me to give up"

A Mumbai-based filmmaker found a friend in a hopeless place

Mumbai-based filmmaker Srishti Jayin had the most expensive New Year’s bash, despite being at home, and not indulging in any retail therapy. On December 31, 2020, she fell prey to an online scam, and lost almost two lakhs in 15 minutes, while trying to buy a bottle of Sula online.

She shared her account details with a trusted wine shop. “I was having a terrible day at work. I wasn’t thinking clearly. But the scammer punched me back to my senses, and I wasn’t going to let him win,” she said.

Would she get it back? The odds were against her.

As she spent the wee hours of January 1, 2021 at the local police station, she realised she knew nothing about police station protocols, online scam mechanisms, banking system, RBI rules and so on.

Jayin waged a war against the system to retrieve her sum. During the course of the five-month battle, she found a friend in a hopeless place: the scammer himself. While most authorities convinced her that the money would never return, the scammer friend gave her hope, made a promise, and kept it.

Read her surreal experience in her own words.

“On December 31, 2020, I bought a bottle of Sula before meeting my building friends. I called my usual wine shop in Versova. Their assistants weren’t carrying the card machine around, and they asked me to share my account number on the call. I wasn’t thinking straight. One after another, they sent me 8 OTPs claiming the earlier ones didn’t work; I complied.

Later, when I ordered food, and received a message from the bank about the transaction, I realised there was no notification about the earlier transaction. On calling the bank’s customer care, I was informed that between 9.10 pm and 9.40 pm, I had successfully made eight transactions amounting to almost Rs 2 lakh. I was shaking and crying. I didn’t know what to do. As a reflex action, I asked them to block these transactions. I called the bank manager, who was out partying. He asked me to come to the branch the following morning.

My father took me to the police station so I could file an FIR. As I started making the complaint, they just laughed and said, ‘Kitna gaya? 15k? 18k?’ When I said ‘Do lakh‘, the inspector was shocked.

That night I learnt that if the scam is of such a big amount, it becomes mandatory for the cops to make an FIR. They spoke about how four others also got scammed from the same number that very night and told me to give up on the sum.

For the rest of the night, I incessantly called the wine shop. I wrote emails to the banks. Next morning, like a possessed woman, I entered the bank and started shouting at them for having no security walls and not red-flagging such big transactions from my savings account. They all looked lost and told me it was next to impossible to get it back.

While I was still there fighting, my phone rang, and I answered it without looking. It was the guy from the wine shop. He politely asked, ‘Madam iss number se mujhe bahut saare calls aaye the kal. Aapne call kiya tha?‘

I lost my calm and demanded my money back. I may have used very colourful language too. The bank manager signalled for me to hang up, and later reprimanded me. But this man on the other side of the line didn’t raise his voice, or use any lewd language. With a lot of tameez, he asked me to calm down and promised to return the sum. He mentioned there had been a mistake, and that his sons got into the system and took the money for fun.

I couldn’t believe what I was hearing, and warned him that I was involving the authorities to take him down.

In the meantime, I had also filed an FIR against the bank for their weak security that led to this fraud. I feel because the FIRs were recorded, the scammer was actually scared.

Strangely though, he kept on chatting with me on WhatsApp asking me to withdraw the complaints, assuring me the money would return. One day he called me up and asked me, “Madam, aapne fraud claim kyon daala hai mere naam pe?” I was bemused, and asked him, what other word should I have used?

The bank shared the details of the eight transactions. There were two Flipkart transactions (for two OPPO phones, each worth around Rs 40,000), and the others went via third-party companies like PaisePe, Payumoney, MMTCPAMP and another Gurugram-based telecom business. But the bank authorities and the cops kept shifting responsibility to each other, and asked me to not have any hope.

After a week of conversing with the scammer and the authorities, I knew if I was going to get any money back, only this man could help me. My scammer friend never hung up on me or ghosted me. He was a family man. I could hear his family talk in the background during the phone calls. He told me he had three sons. Sometimes, I shared stuff about my work with him.

I asked him for proof about cancelling the transactions, and he sent me screenshots of the cancelled Flipkart orders. It gave me hope. I told him I needed to pay rent, bills, how I have no money left anymore, and it took me years to make those savings. I shared my history about how as a creative freelancer, during the pandemic, I had lost all work. Basically, I sent the point across that I was shattered and he needed to return the money. He told me that he understood and that he needed some time. 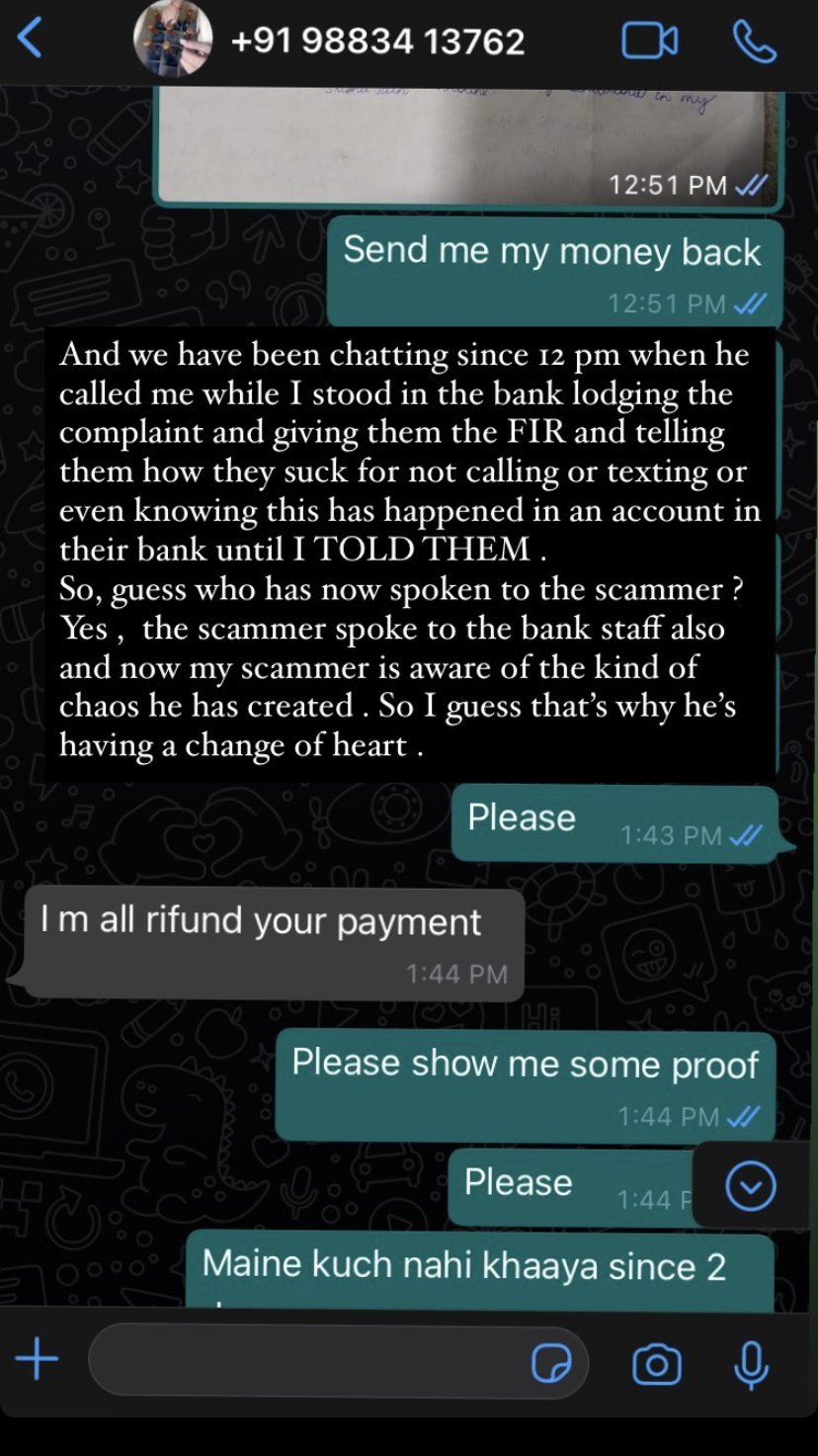 Although talking to my scammer friend on a daily basis felt straight out of some fantasy thriller, that week is a testament to the fact that I can make friends wherever I go. In the strangest way possible, the online scam artist felt like a friend I chatted with for hours every day. I really wanted him to keep his word because that would be such a middle finger in the face to all bank officials and cops who neglected my concerns, and said that people who take money, never return it.

Many insisted I contact cyber-crime cop Shubham Singh (@shubhamcybercop on Instagram). With his help, we tracked down the details of my new friend: Majaffar Hoque from Amirpur village in West Bengal. There were only 327 families residing there. We found his locality, the name of his society and even the JIO Centre ID. There was no way he wouldn’t be caught now.

I arranged for a meeting with DCP Abhishek Trimukhe of Bandra Police Station to send the case of my online scam to the cybercrime department. On my way to his office, my scammer friend randomly messaged saying that he will keep his promise, and requested me to not take any drastic actions.

I told him I was busy and whether he returns the sum or not, I was going to get it back. I oscillated between threats and emotional atyachar in my conversations with him.

The DCP convinced me that even with a cybercrime person working on the case, the money wasn’t going to come back. He explained how online scams happened everyday, and these frauds don’t operate from any registered office, but sit under some random banyan tree in the middle of nowhere and target people. I was feeling dejected, when suddenly my phone beeped twice. Money from the two Flipkart orders were credited back to my account. It was close to a lakh.

Did I just win half the battle without any concrete help from the authorities? Sure, I did.

I showed him the message, but he refused to believe that the scammer had returned my money. When I insisted that the scammer had a heart, the DCP told me, ‘Well, looks like your case is sorted then.’ But that was just half of the money, and the rest of it was stuck in KYC services and unless the banks or the cops took any action, the scammer himself couldn’t return it.

That evening, I thanked Hoque profusely because he was the only one who really took any active steps to return the sum. He called to congratulate me. He also wished he could return the rest, but it wasn’t in his control. Hoque added, “Aap achhe ho isi liye paise wapas kar raha hoon.”

Was he Robin Hood? Or Santa? I didn’t know how to react, it was all too surreal to process.

After that call, the days of our friendship were certainly numbered. We barely interacted again, except when he checked in to see if I received the rest of the sum. In April, when my debut directorial venture released, I sent him the trailer and asked him to share with his family. He never responded. Am I slightly sad? Yes, maybe.

Since then, I have chased the banks and escalated matters to RBI officials to get my money back. It’s been over five months since the online scam. While I have received 90% of the money, one transaction is yet to be refunded, but I will not quit this fight.

The harrowing experience was loaded with stress, sleepless nights and lessons for a lifetime. It all comes down to our Never Give Up attitude and resilience.

Despite rejection from all authorities, I found a ray of hope and humanity in my scammer friend. I played on that and spoke about my ordeals as a freelancer to him. I don’t know if he really understood my troubles, but his humanity rose above his shady schemes, and in the weirdest way possible, I’ll be grateful to him for keeping his promise and returning the money he could.

During those days, when I’d juggle between work, meeting cops, calling Flipkart, chasing the bank officials and talking to the online scam artist, I felt like Geet from Jab We Met, and wanted to scream, “Please God, ab life thodi boring kar do.

I may have had one of the worst New Years in the history of bad New Years, but six months on, I am at the finish line.”