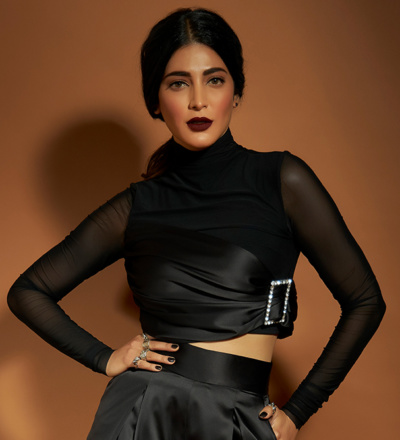 The Shruti Haasan watchlist – expect thrillers, dark humour, and a blast from the past

The multi-hyphenate’s watchlist has a little something for everybody

Watching your food go cold as you struggle to find something to stream online is a very real first world problem, one that even the rare occurrence of impeccable wifi is incapable of solving. And with being trapped in our houses 24/7, even a friend’s otherwise different watchlist just seems like a reshuffled version of your own.

Have we really watched everything that the world wide web has to offer?

A few Bollywood celebrities helped us prove otherwise, as we picked their brains to bolster our binge-watching, and this time around we got actor, singer and songwriter Shruti Haasan to share her lockdown watchlist with us — and yes, it will keep you from rewatching That ’70s Show or any other ’90s classic for the 27th time.

Expect bucket loads of thrills, a very welcome trip down memory lane, and some wholesome feel-good content with a twist.

This gangster meets family drama set in Birmingham in 1919 is thrilling and gripping, and it’s no surprise that it’s made it to the Shruti Haasan watchlist.

“Peaky Blinders is one of my most favourite shows ever. It is all the way up there in the eternal rewatch section. The writing, the music, and the performances are amazing. It’s gripping, emotional and evocative and really transports you to that world. It also lead me to spend hours reading about the real Peaky Blinders,” says Haasan.

“Plus, I am also mildly obsessed with Cillian Murphy (who plays Thomas Shelby), so that’s an added bonus,” she adds.

The Fall, a British-Irish crime drama that traces the journey of an Irish serial killer (played by Jaime Dornan) masquerading as a bereavement counsellor, and an English policewoman who is in hot pursuit of the aforementioned serial killer.

“I absolutely adore this traditional cat-and-mouse thriller, but most of all, I love the characterisation and treatment, and also the performance of the female lead Gillian Anderson. As a woman, it was amazing to see a sexy, smart, cold, and feminine forty-something all rolled up into one character. I also really like the fact they go beyond the stereotypical depictions of what a serial killer should look or act like. It’s very addictive,” says Haasan.

“It will make you laugh and think in that roundabout way,” says Haasan about the show centred around the life of BoJack Horseman, a yesteryear TV actor shown navigating through the glamorous maze that is Hollywood. As his name suggests, he is half-horse, half-man.

“The strange world of half-animal people talking, the stereotypes of fame, and its pitfalls, and this adorably negative character at the centre of it all” are what keep Haasan coming back for more.

If you’re wondering what the actor watches to lift her spirits up on gloomy evenings, then this is it. Her go-to feel good show Queer Eye has a very special place on her watchlist. The show introduces a new character to us in each episode, usually in serious need of a makeover, and that’s when the Fab Five walk in to save the day.

“I’ve always been a fan of makeover shows and this show covers every single part of a person, from mind and body to food, style and home. It’s one of the most heartwarming shows and all five guys are so, so lovely,” says fellow Queer Eye fan-girl Shruti Haasan.

Based on true events, Chernobyl is a retelling of the 1986 nuclear accident that shook USSR and parts of Europe. It gives you a glimpse of the sacrifices people made to get past this catastrophic man-made disaster and its long-standing repercussions.

“Easily one of the best watches. The performances are amazing, as is the direction. This whole show is such a trip into a completely different space. It draws you in and keeps you there. It is as riveting as it is emotional,” says Haasan.

The series set in Broadchurch, a fictional English town in Dorset, follows two detectives investigating a murder, getting deeply involved in the mystery and what lurks beyond the surface in this tiny seaside town .

“If you can’t tell already by this watchlist, I love thrillers.  I love this show because I absolutely adore Olivia Colman and David Tennant too, who is wonderful as the quintessential messed-up bloke. The story is really interesting,” says Haasan.

“Innocent, nostalgic, and imaginative, the show draws you back into that world of small-town life in America in the ’80s,” says Haasan.

Stranger Things is an adventure that begins with a search operation for a missing boy, eventually leading to the unearthing of top-secret government operations involving supernatural forces, new exciting twists at every corner, and more.

“This whole show is a massive mood,” adds Haasan.

Grief can do strange things to the mind and in Tony Johnson’s (Ricky Gervais) case, his wife’s passing turns his witty, gentleman-like self into an impulsive and bitter man, who says whatever is on his mind without weighing the repercussions.

This British dark comedy, written and directed by Gervais will definitely make you rethink your own actions. And words.

“It’s so heartbreaking and so hilarious. You’d have never jumped back and forth from crying to laughing so frequently and quickly. The wonderful writing, and beautiful performances are what make this show an absolute gem,” says Haasan.

“Phoebe Waller-Bridge (the writer and actor playing the protagonist of the show) is a force,” declares Haasan, and we couldn’t agree more.

“This show is so real and fun and deep, all at once. Absolutely phenomenal writing, and it’s brilliant to see a woman’s inner voice being brought to life so effectively as a narrative,” says Haasan about this comedy that with each episode, tells the story of a liberated woman living in London, who is trying to deal with loss, and life in general, in her own endearing and oh-so-relatable way.

All ’90s kids have spent afternoons after school glued to the TV, watching The Powerpuff Girls in awe. This was most nineties’ children’s first introduction to exactly how fierce girls can be. Shruti Haasan was no different.

“I found episodes online, and went bananas because I was obsessed with this show as a kid. And I also loved watching it because it’s wonderful how the show is about women sticking together, and being pretty badass while doing it. I’ve always loved the characters and it is such a fun rewatch,” says the multi-hyphenate.