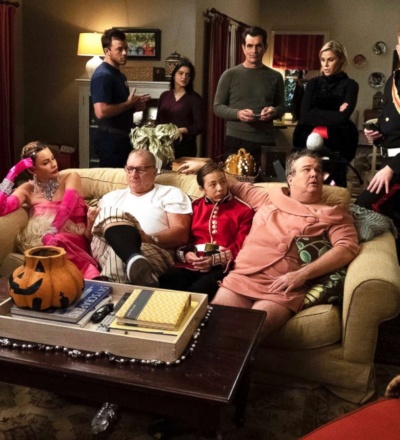 Photo: A still from Modern Family
by Nikhita Arora

Cracking the 'blended family' code without cracks appearing in your relationship

Ayushi Sharma’s* blended family is the human equivalent of your spinach-turmeric-mango smoothie. Adopted by an Indian-American mother and an Indian father when she was only six months old, she welcomed an adopted brother into the family five years later.

But about two years in, Sharma lost her mum. That’s what marked the figurative plugging in of a heavy-duty mixer, and the blending that followed may have been more than any eight-year-old is equipped to handle.

“We were vacationing in India with our father and a female friend of his, whose son had come along too. One evening, he called me to the poolside where she was sitting, and asked me if he could marry her. I promptly said no,” Sharma recalls.

“I had known her for two days, I was frazzled. But as I struggled to find an answer to the subsequent “Why?” I was posed with, I noticed a box on the table, and a ring on her finger. He had already proposed.”

What came after seemed like a blur – an engagement, a wedding, a new home, and two new family members.

“I don’t think I even got a chance to process my feelings. Everything was suddenly new and different,” explains Sharma.

While the concept of a blended family has existed since Valmiki wrote the Ramayana, and was the focal point of Hum Saath Saath Hain, they’re only just beginning to feature in dinner table conversations without triggering Deepti bua‘s acid reflux.

As divorce and second marriages become increasingly common, we need a guide to navigate this complex family dynamic. Because so many lives depend on it.

“Invalidating a child’s response or not being transparent or keeping them abreast of developments in a relationship, can result in animosity, bitterness, and rebellious behaviour,” explains Vaish.

Communicate honestly and give every individual their due time to come to terms with the situation.

What to expect when you’re expecting…a blended family

Vaish also highlights the importance of laying out expectations before adopting a blended family set up. Especially in cases of parental roles. “Everybody needs to know what their responsibilities are so set realistic expectations that are treated as long-term goals instead of immediate requirements,” she explains.

This is especially helpful in the Indian context where the step-mother is expected to conjure up Maa ki mamta overnight, and assume the role of a dedicated parent to a child she barely knows.

Put that label maker away

In Sharma’s case, there was an onslaught of changes that she wasn’t prepared for, but with 25-year-old Raina Rajpal, the prospect of a new mother seemed like just the change she had been waiting for.

“When my father decided to remarry after separating from my mother, I was happy for him, but secretly also felt this was my chance to have a picture-perfect family everyone talks about. I was going to have a mom.”

But it was the expectations that came with calling someone your mother that Rajpal believes came in the way of what could’ve been a nurturing friendship.

“There are rules about how an ideal family should act, and the added condition of having to show the world how happy you are. These facades were what my expectations were based on. So I did the whole introducing “my mother” to the world and it felt great, but then came the bit that I was unaware and unprepared for,” she explains.

Rajpal struggled with the authority exerted on her by a complete stranger in her own safe space – her home. She didn’t know how to live by these new rules and meet so many newfound expectations.

“Terminology and labels play a huge role in determining the outcome of a relationship. The fewer the labels, lower the expectations, which help you concentrate on what is truly important – the bond,” says Vaish.

Nurture your new bond, rather than enforcing a relationship category. “A great way is to let the two people sharing the relationship decide what role each of them want to assume, after mutual consent of course,” she adds.

Rajpal concurs – “If I would’ve approached my bond with my step-mother as a friendship and let it take its own course, I feel like we would probably share something more intimate.”

What even is an ideal mediator?

Rajpal believes that all the credit for a smooth transition and peaceful co-existence goes to her father, who was always a fair mediator and empathetic listener. Sharma on the other hand experienced something completely contrary.

“My dad felt like it was his responsibility to facilitate the bond between my step-mother and my brother and I. So, when he felt like we weren’t bonding like he had imagined, his guilt would surface in the form of angry outbursts directed at all of us. These outbursts were major factors in widening the communication gap between us as a family,” she shares.

“A mediator is a bridge, and not a referee, His or her job is simply to aid and facilitate communication, and not assume the role of an interpreter,” explains Vaish.

She goes on to talk about how, more often than not, the mediator’s selfish interests begin to manipulate the way they relay information.

“Success or failure does not rest on the mediator’s shoulders. So don’t try to be Miss Congeniality. Pick sides and take decisions that are favourable for the family as a unit, and not for you as an individual.”

“I never had to mediate, I give all the credit to my girls for handling this with such maturity,” says Allan Pinto when asked making a smooth transition from a family of four to a family of five.

A decade ago, when Pinto’s younger daughter returned home from school with a classmate who needed to escape an unfavourable domestic situation, “my wife and I were on the same page, and wanted to do whatever we could to help the child.”

The family applied for legal guardianship. “Today, when I’m asked about my children, I proudly say I have three daughters,” he adds.

Pinto believes that the success of his blended family was the result of instinctive behaviour, but the lack of road bumps he attributes to his daughters.

A major factor was maintaining consistency. Despite the sudden addition of a new family member, Pinto and his wife made sure the integration was seamless, behaving the same way with their biological daughters, while allowing each of the girls to find their own space without imposing any rules or relationship requirements.

“When anybody is introduced to someone new in the family, they are forced to adopt a new role. The only way around it is making clear distinctions between individuals and avoid comparing,” explains Vaish.

“This helps keep insecurity at bay. An individual must not change their core identity based on  a new person entering their life, but should decide what role they want the other person to assume in their life.”

Always remember that you are on the same team

External factors such as extended family, and societal pressures are hardly ever in our control. What is in fact in our control is the ability to communicate honestly.

“If it’s too early to feel like a family, work towards building a team with shared interests,” says Vaish. “Sit together everyday to reinforce trust and the feeling that it is all of you against whatever it is that might pose a threat to the bond you’re working on building,” she adds.

Sometimes the best way to build a circle of trust is getting a third, neutral party involved. Preferably a professional.

“Group therapy first and foremost keeps one single person from shouldering the entire responsibility of the blended family. What it also does is allow each member of the blended family a safe space to voice their concerns. This makes the transition smoother, and helps all parties develop coping mechanisms to navigate their new normal.”