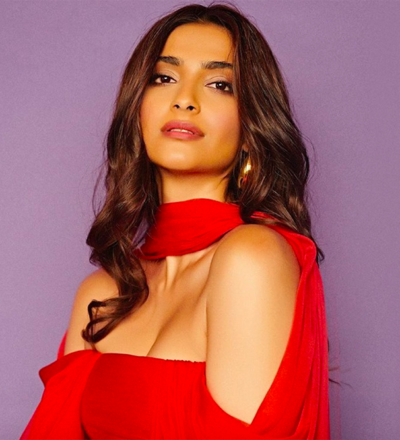 Sonam Kapoor on the four books that changed her life

And why people may stop watching her films…

She starred in Aisha, a remake of Jane Austin’s iconic book Emma. Her last release, The Zoya Factor (2019) was based on Anuja Chauhan’s novel of the same name. She’s been quoted in publications with hearts in her eyes, talking about her desire to have been a librarian so she could be closer to books. And when you get her to talk about classics (Moby Dick, Jane Eyre), it feels like she’s more or less done a PhD on her favourites. All signs point towards Sonam Kapoor (or Sonam K Ahuja, as she’s now known) kind of being a bookworm.

At the fashion presentation for the launch of the Karl Lagerfeld for Cover Story collection, we picked her brain for the books that changed the way she thinks. Her answers will likely surprise you.

The Mahabharata and The Bhagavad Gita
The Mahabharata, one of the two Sanskrit epics of ancient India tells the tale of the Kurukshetra War and the fates of the Kaurava and the Pāṇḍava princes , while The Bhagavad Gita is a 700-verse part of the epic, that has now become an iconic Hindi work in terms of literature and philosophy.

“It sounds weird, maybe not weird … but I don’t know if a lot of girls my age would say that. I like the idea that when we talk about Indian mythology, I feel like the story always says something. There’s always a moral. The stories that were told were always about good vs evil, but it was always grey. The good men showed shades of grey and those who were supposed to be villains always had a lot of good in them, and that’s what’s incredible about Indian mythology.”

The Unbearable Lightness of Being, Milan Kundera
The classic Kundera novel, set in a politically unstable time, follows the protagonist, Tomas, a brilliant Prague surgeon as he pursues a philosophy of ‘lightness’ in his life, and what ensues when he meets Tereza, a café waitress in a small-town.

“Weirdly, The Unbearable Lightness of Being, had a huge impact on me, just in terms of the way things are meant to be in relationships.”

The Bell Jar, Sylvia Plath
The only novel authored by the writer and poet is a visceral, semi-autobiographical work that follows the protagonist’s descent into mental illness

“I love poetry so I loved reading Sylvia Plath. I liked the way she wrote, when you’re in school you read Milton, Shakespeare and I realised you can write poetry like that. I loved the fact that her angst was so real, open, and raw. Bell Jar is one of her works that I thought was incredible… (laughs)… nobody’s every going to watch my films again.”