Taking the lead at any age, with Sudha Murty and Deepa Mehta

One is a legendary author and philanthropist, whose wit and humility has made her an icon across generations. The other is a taboo-shattering filmmaker whose work has continued to push the boundaries and spark conversations. Don't miss this electrifying conversation between Sudha Murty and Deepa Mehta

Highlights from their electrifying discussion at the Tweak Summit

One is a legendary author, engineer and philanthropist, whose wit and humility have made her an icon across generations. The other is a taboo-shattering filmmaker whose work has continued to push boundaries and spark conversations. Listening to Sudha Murty and Deepa Mehta talk about their work makes you feel so invigorated, you feel ready to run a marathon.

You may think you know the stories of Sudha Murty and Deepa Mehta, whose Elements trilogy, comprising of films Earth, Water and Fire continue to be the gold standard of social filmmaking. But these women refuse to be neatly filed into these compartments or cubicles that society creates.

To celebrate our first anniversary, we brought these inspiring women together to talk about taking the lead at any age and what it meant to be working women when they embarked on their individual professional journeys.

In our talk, Sudha Murty tells us that she has been defying boundaries from a young age. She was the only woman in her engineering college in 1968. The news of her wanting to become an engineer was “like a bomb in the family.” But with supportive parents, she pushed forward and turned a blind eye to the naysayers who would keep popping up in her path.

“They didn’t have a toilet for women in the college. They said ‘what is the point of making one, she will be gone in three months anyway’,” she shares. Little did they know that they were talking about one of the most headstrong women they’d have the chance of meeting in their lives. 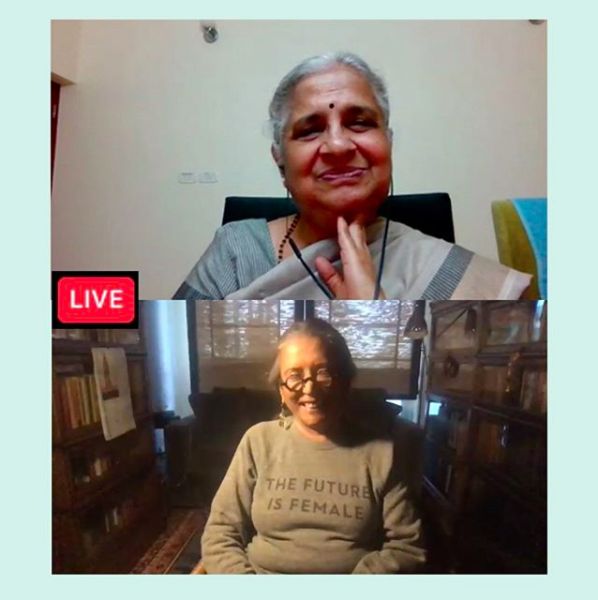 Deepa Mehta echoes the need for parental support when you’re taking the road less travelled. She was studying philosophy at Lady Shri Ram College, New Delhi, when the doors of her curiosity burst open and filmmaking called out to her. Her mother wanted her to get married and start a family, her father, a film distributor, wanted his daughter to become an academic and have the stability of a normal job. “We are privileged Sudha ji, that we were allowed to follow our passions and take up fields that of our choice,” she says.

Deepa Mehta’s films are poetic tellings of grave social realities that we too often shy away from. For that, she knows that what she has to say and what she creates get mired in controversies. Sudha Murty adds that as long as you know what is right in your heart, the other voices can’t drown you out.

Through their discussion, both ladies pondered where this need to question a women’s voice comes from. “What is the root of people’s understanding that women are inferior, is this something that is learned? Who do we learn this from?” asks Deepa Mehta.

The power of the arts, cinema, women’s financial independence and putting up with haters – Sudha Murty and Deepa Mehta dropped plenty of truth bombs and nuggets of wisdom in their conversation. Watch their electrifying discussion for some serious life lessons, plenty of laughs and quotes you’re going to want to hang up and put on your walls.

Teach your young ones about Sudha Murty’s inspiring story and discover more real-life heroes in our first-ever children’s book, When I Grow Up, I Want To Be, available here.