Representative photo: A still from Kapoor And Sons
by Arundhati Chatterjee Discover

Team up for some family drama

What connects an 11-year-old, a 29-year-old and a 74-year-old beyond bloodlines and Cadbury Dairy Milk? Ludo. In case you’re itching to refute this claim, remember that everybody, from your bua to my nani, the Pandavas to Emperor Akbar… even Virat and Anushka, love this star among Indian board games. So much so that, in isolation, we have been playing it with total strangers on apps.

Last year, when many of us returned to our big boisterous families and emergency exits were sealed, we squabbled over TV remotes and gave them a foundation course in privacy. Until we ran out of things to argue about and movies to stream without an unforeseen lovemaking scene ruining the moment.

On one such occasion, I planned a game night with three generations of my family and got an eye-opening lesson.

We began setting up Game of Thrones Catan after dinner, but after 45 minutes of assembling the game pieces, our interest levels were waning. My bua interjected, “Board games are supposed to be fun, not an elaborate science project. Our time was so much simpler.” Instead of arguing, I challenged her. “Let’s bring out your games.”

Out came a well-worn wooden Checkers board, a 45-year-old Ludo set, and a circular board she called Buddhijal. We took a trip down nostalgia lane as she shared stories from her childhood when she, her siblings and neighbourhood kids played for hours in the verandah. “There was a strong sense of community,” she added.

Sheepishly, we agreed. The simple game uncovered age-old anecdotes I had heard as a child from my dadi, and it was my niece’s turn to get a dose of family history: long hours of load-shedding, one black and white TV in the entire locality and how to live in a household of 23 members without stabbing anyone.

Ludo made us equals. I wasn’t looking at my older relatives as a CBI officers, trying to solve the mystery of “Toh beta, shaadi kab kar rahe ho?” They didn’t view me as an insolent upstart who still can’t make round rotis. We had cracked the code of levelling the playing field.

Catch them cheating, watch them argue like kids and throw tantrums, topple the boards, and you can back answer your elders too — everything is fair in love and Ludo.

Turns out, these Indian board games can heal injured human connections and build new ones, bridging the generation gap with a few simple moves.

At Lamiya Chitalwalla’s family reunions, things can get wild. A group of 80-somethings often regroup to indulge in a game of Dadu (a variation of the ancient game called Chaupar).

The oldies sport knee caps and dentures, a few are armed with walking sticks, but in that moment, they are more aggressive than angsty teenagers. Hurling abuses, slyly moving pieces, falling on top of each other; it’s carnage.

But she assures us that “this is how they relive their childhood and connect with the younger generations”. A friend’s mother even hand-crafted a Dadu board as part of her daughter’s bridal trousseau, making sure a bit of the family’s history passes on to the next generation.

10 ancient Indian board games to reconnect with

Following hot on the heels of the Ludo revival is a trunk full of traditional Indian board games that will help you unlock family secrets too.

From predecessors of our modern-day favourites and early games of gambling, to board games that teach young ones the story of Ramayana, vote for these 10 games and sing along, “Hum saath saath hai”. 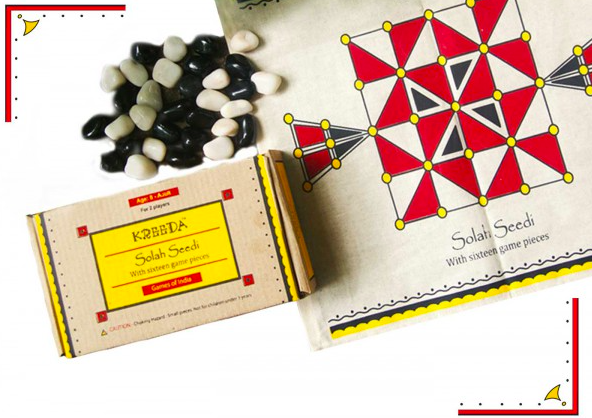 Exasperation, panic, fright and ultimately, the comfort of a secure home, the two-player high-intensity game of annexation challenges both your heart and mind.

Each person enters the battlefield with 16 game pieces, and with a strategic game plan — to kill as many pieces of the opponent while capturing enemy territories.

Dilapidated remnants of game board-like sculptures and inscriptions across temples in Tamil Nadu have helped game creators at Kreeda revive the game that may remind you of all those history lessons: Annexation of Awadh, Battle of Plassey, Battle of Buxar — but in the best way possible. 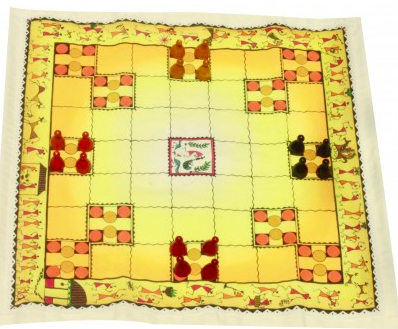 You know a game is epic when it makes a special appearance in the Mahabharata.

The rules are identical to our modern-day favourite Ludo (minimum two players, maximum four). Each person needs to throw the dice, and based on the number, move pieces anti-clockwise to reach the final destination.

You’d be in esteemed company playing this one — kings across dynasties have indulged in rounds of Chowka Bara and variations have been played across Kerala, Andhra Pradesh, West Bengal, Rajasthan and Tamil Nadu. 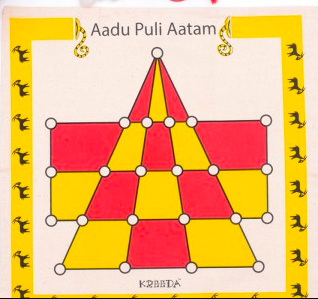 In this two-player game with three tigers and 15 goats, each player decides the animal they want to guide and the tigers try to kill the herd of goats, while Team Goat attempts to corner the ambush of tigers, basically checkmate them.

This ancient predecessor of chess was extensively played across South India. If you look closely, you can see the board drawn on the parapet of the Chamundeshwari temple in Mysuru, Karnataka.

Are you ready for a walk on the wild side? 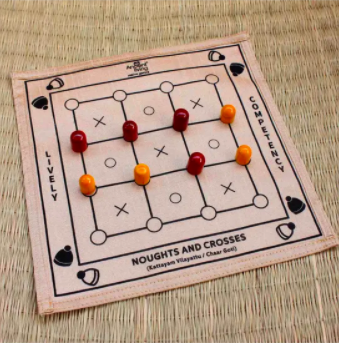 X and 0, noughts and crosses, tic tac toe, all find their roots in this traditional game popular in Tamil Nadu. Instead of three pieces like its successors, the game is played between two players with four coins.

The agenda is simple: Align the pieces in a row — diagonally, vertically or horizontally — to win. This requires quick thinking and strategic foresight, and can sharpen really young minds. 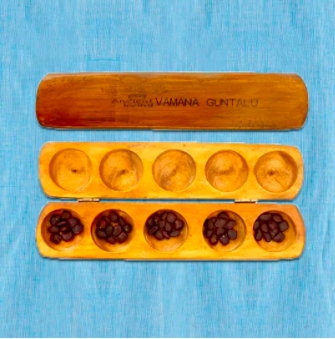 You may be the plant-murderer of your family, but are you the seed hunter too? Let this game decide.

This two-player game originated in Tamil Nadu, and reached Indonesia when the ancient Tamilians took this board there during the Chola expedition.

The apparatus involves a wooden board with 10 pits (five on each end). The objective is to capture more seeds than your opponent. The gameplay begins by sowing your seeds on your end, and as the game progresses, the seed moves into your opponent’s territory to uproot the opponent’s seeds, and accumulate them in a storage pit.

The player with most seeds in their storage pit at the end of the game wins. 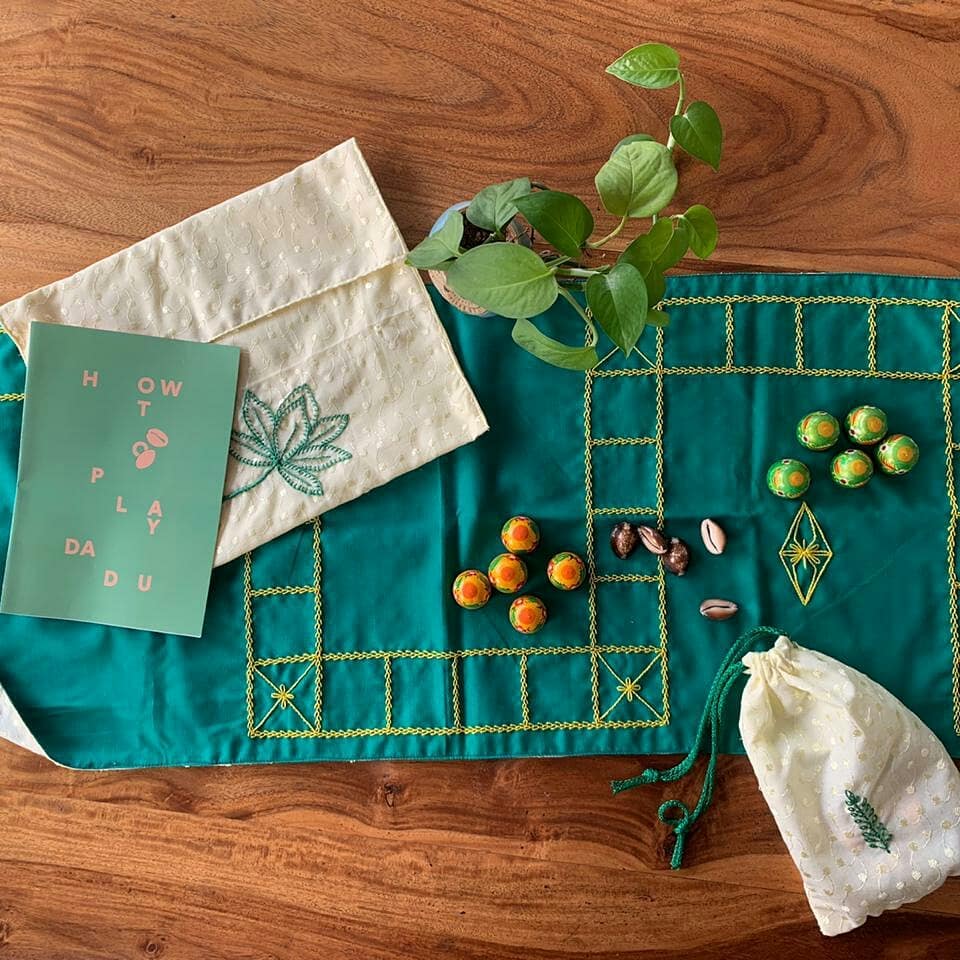 Popularised by the Gujarati Bohra community, this game is rooted in war-time strategy and planning. Since around 14 players divided into two teams can play this game, it’s perfect for big, fat family gatherings. (Since they’re not loud and chaotic as it is, right?)

Players position themselves on each side of the cloth board, and the team that manages to cross over all their pieces to the other side of the board, wins.

Put your game face on, so you can protect yourself against aunties who can get really competitive and deny you an extra serving of post-match biryani. 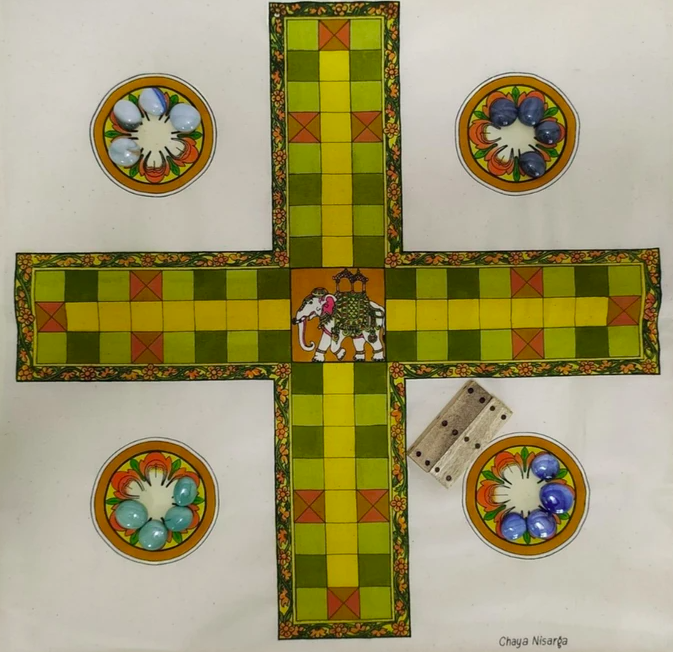 Ludo’s real dadaji and often referred to as the national game of India, this one has a colourful history.

According to legends, emperor Akbar played a version of Pacheesi in his court at Fatehpur Sikri and his game pieces comprised slaves and women. It’s alleged that Shakuni in Mahabharata was blessed with the power of rolling the dice according to his wish while playing Pacheesi. If only I could channel Shakuni once in my lifetime.

We are familiar with the Ludo-like gameplay already: hope the dice favours you and you can make your four game pieces reach the finish line without getting caught by the opponent’s pieces (two-four players). 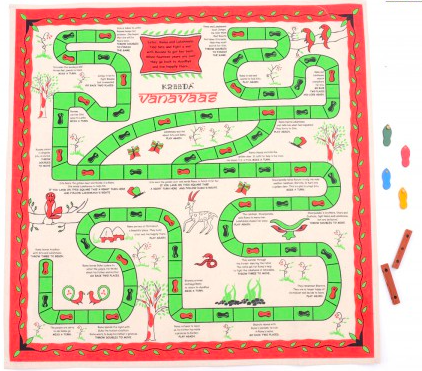 Sitting through 78 episodes of Ramanand Sagar’s Ramayana can be time-consuming. Introduce the characters of the epic to kids in an engaging way with this adventure-based board game that follows the main characters — Rama, Sita and Laxman in the forest.

Dividing the Ramayana into three games, the first series sees two to four players use paduka-shaped game pieces to navigate through vanvaas. As you cross levels, you go from Chitrakoot to Bharata’s encounter with Rama, the meeting with Shoorpanaka and the incident of the golden deer.

If you want to keep the story going, invest in the other two series to meet Ravana and Hanuman. 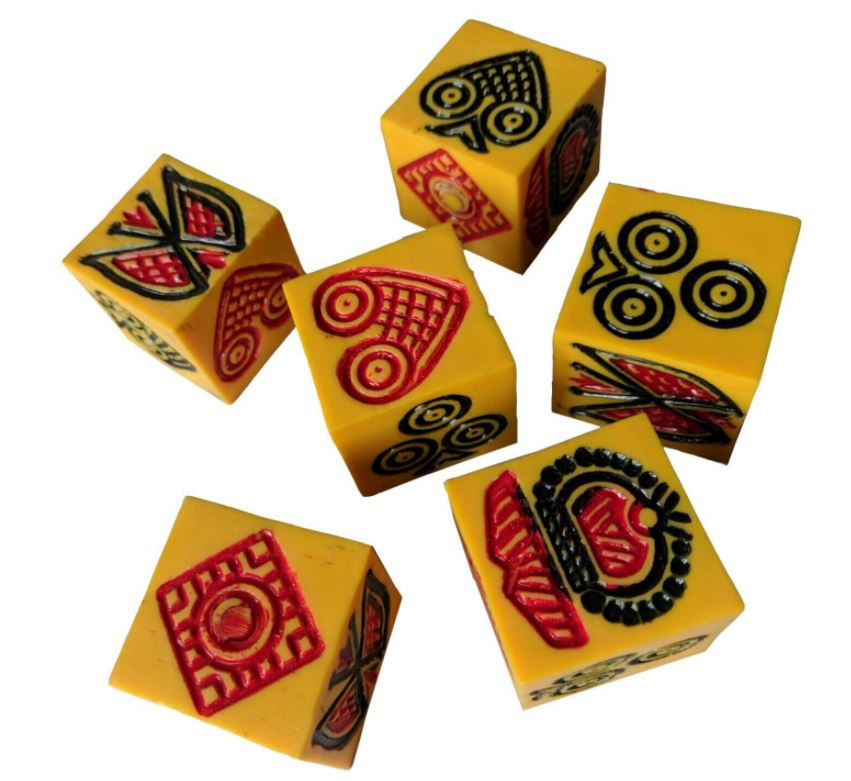 Put your lucky streak to test in this popular 18th century game. Played in Arunachal Pradesh and other north-east Indian states, this game just requires you to bet and guess.

The game uses six dice – each side represented by a club, diamond, spade, heart, flag and face. The players need to place bets on the symbol they think will appear most after everybody rolls their dice.

Make a right guess to win the game. It’s pocket-friendly and can be played by two-six players. 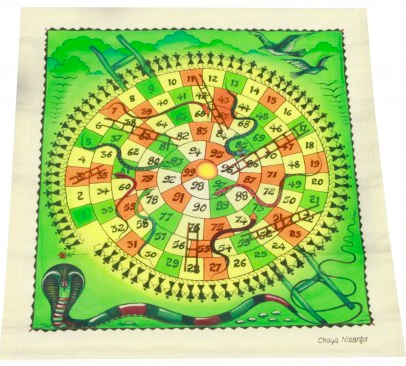 If you haven’t played Snakes & Ladders while growing up, you need to go back in time somehow, get eaten by the snake at 97 to land back at 2. That’s the true rite of passage to adulthood.

The Ethnic Story redesigned our favourite childhood game on a piece of handmade cloth. The arena of ups and downs is now a circular space with the same old venomous serpents awaiting your arrival.

In case you get bored of playing this game, you can also hang it and with a few DIY hacks, convert it into a dartboard.