If nani is okay with going back to school, then you can do it too

Get inspired by three women who returned to school after divorce, widowhood and retirement, earning a second lease on life

Going back to school after long lazy summer breaks – a thought that still makes us squirm uncomfortably. Waking up late, no lectures, no homework, and unlimited free time were the luxuries we’d feel slipping from our grasp as the first day of school approached.

Imagine going back to school at the same time as your grandchildren, or preparing for exams while working a full-time job and running a house?

Sounds impossible, right? Not for the women you’re about to meet. We’ve spotlighted the CEO moms who have juggled careers and personal commitments, and encouraged women who were struggling to get back to work after having a baby. Now we’re obsessed with those seekers of knowledge who are on a constant path to bettering themselves.

From using education as a tool to get a second lease on life, to realising how independence is the ultimate act of self-love, these three women, and their journeys of going back to school after decades, will leave you feeling inspired to carpe diem.

“I didn’t want to be a bechari” 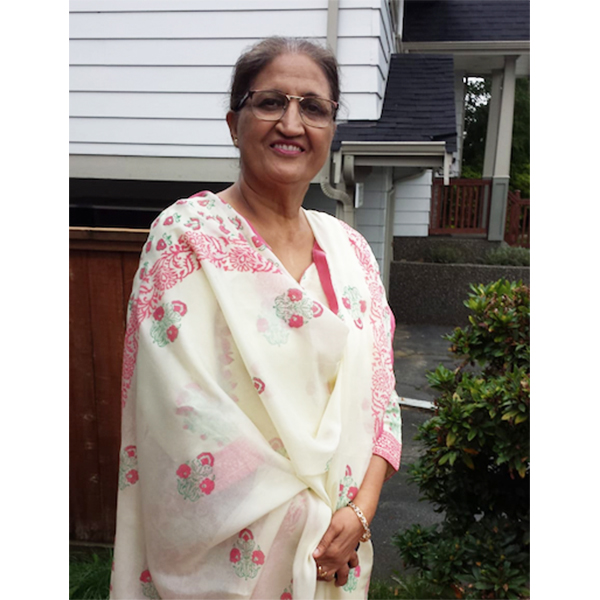 Born in Punjab, Sukhdev Sangha moved to Canada with her family in 1972, with nothing more than an eighth grade education. She was married off at the age of 18, and gave birth to two daughters soon after, raising them in a foreign country where she didn’t speak the language. Twelve years later, she also had a baby boy.

Around her son’s first birthday, tragedy struck when Sangha was diagnosed with a brain-related ailment that required surgery. Her husband “never left my side as I fought for my life”, but little did Sangha know that an even bigger battle was around the corner.

Between 2003 and 2013, Sukhdev lost both her husband and son-in-law to sudden heart attacks, while her 19-year-old son passed away in a car accident.

“I hit rock bottom. I couldn’t understand why this was happening to me,” says Sangha, who was diagnosed with depression.

“I noticed a pattern in all my interactions with people. They would call me bechari (poor thing), I wasn’t okay with that. I didn’t want to be a bechari,” explains Sangha. “One day, my niece, who is a teacher, said something to me that changed my outlook towards life. She said ‘You’ve lived your entire life for other people, why don’t you try living for yourself now, and do things that make you happy.’ She suggested I get back to studies,” she adds.

Today, at the age of 65, Sangha is enrolled in a community college in Canada, preparing to give her level three exams in English, and learning how to use a computer in ways that most of us take for granted — sending an email, setting up a Zoom call, and accessing the internet.

She calls this her second lease on life – “I do whatever makes me happy, and I’ve never felt more liberated and independent in my entire life.”

“It’s only after my husband passed away that I realised how important it is to be educated and independent. Simple and necessary skills like making a bank account or depositing a cheque can be daunting if you’ve never done that before, but today, nothing intimidates me,” she says.

Sangha has become the star of her family too. “My oldest daughter got married right after school, but her twins have now encouraged her to start studying for her undergraduate degree. ‘If nani is okay with going back to school, then you can do it too,’ they tell her,” she laughs.

“Also, the tables have turned. The children go to office, and the mothers and grandmothers are left studying for exams.”

A single mother who moved countries to study, with a 4-year-old in tow

“Hard work has never killed anyone.” 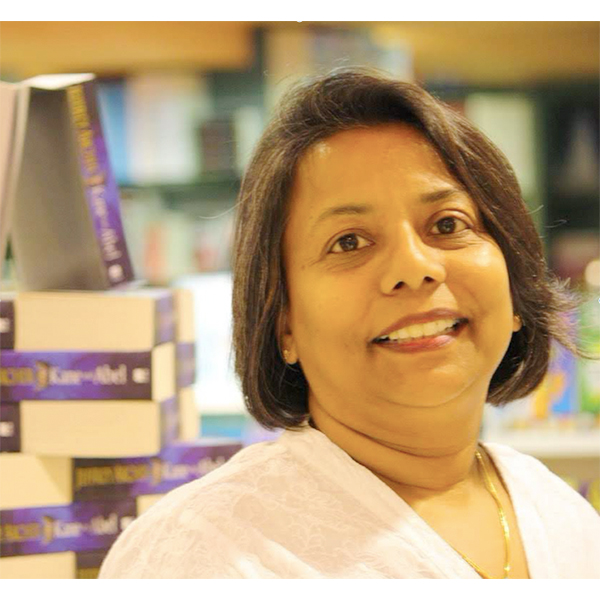 Kajari Mitra has always been a goal-oriented woman with a plan. “I wanted to own a home by 30, have a complete family by 35, and by 40, to enrol myself for a North American MBA degree,” she says.

Instead of buying a house at 30, Mitra found herself starting from scratch.

Soon after she got married, she realised that it wasn’t going to last and filed for divorce. “He was in love with someone else,” she explains.

“We were raised in the traditional Indian way – grow up, get married, and depend on your husband for all financial decisions. So after my marriage went sour, I was forced to learn everything. I burnt my fingers many times,” says Mitra.

With a degree in library science and English literature, Mitra landed a job at the British Council in Bhopal, and made her way up from there.

While she was still working there, her mother passed away. It was soon after her mother’s passing that a shared dream of theirs came true – “I used to tell my mother that even if I had a biological child, I would adopt a baby. And one fine day, I got a call saying they had a 24-hour-old baby boy who had been abandoned, and I just knew I had to adopt him.”

Being the sole breadwinner and a single parent made life challenging for Mitra as there weren’t any day care facilities in Bhopal. “I moved to Canada, to ensure that my son had a better life. I packed my bags and headed to a foreign country where I knew no one, with my four-year-old in tow. In retrospect, I don’t know what I was thinking,” she laughs.

Mitra got herself a job, and after three years of researching, and of weighing pros and cons, she enrolled herself in the University of New Brunswick for an MBA at the age of 40.

Her life was a whirlwind. Mornings were about whipping up breakfast, getting her son ready and dropping him off to school, then going to work, and attending classes. After classes, Mitra would pick her son up from day care, help him with his homework, prepare dinner, tuck him into bed and then get down to doing her course work.

She managed it all thanks to her resilience, “I worked hard. Hard work has never killed anyone. It only helps you grow. All you need to do is push yourself,” she says.

Time management wasn’t the only challenge. Apart from unlearning her basics to keep up with new ways of teaching and studying, Mitra also ended up being operated for gall stones while doing her MBA.

“I remember taking a cab alone to the hospital to get operated, while a friend looked after my son. When I came back, our babysitter didn’t show up, so I ended up making dinner and putting my son to bed myself. Like I said, you really don’t know how much you can accomplish until you push yourself,” she says.

Her persistence paid off, and today, 60-year-old Mitra is a business strategist based out of Pune and swears by her mantra – “work hard and you can achieve whatever you set out to do.”

The mother who was tutored by her son

“I have a renewed purpose in life now.” 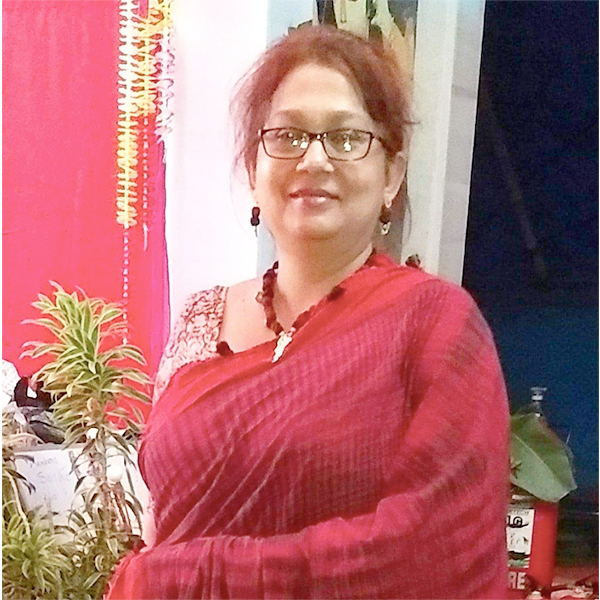 Kakali Bandopadhyay knew she needed to revamp her life when her son pointed out the number of times she’d look down at her watch in the span of one minute. “‘It won’t make time go faster,’ he joked, but this made me realise how I really needed to find something better to do with my time,” she recalls.

Bandopadhyay’s husband, who was in the merchant navy was hardly ever home, and at 49, with her son all grown up, she really didn’t know what to do with all the spare time. “Why don’t you learn a new language?” her son suggested.

She didn’t think she could get back to studying. But her son, who had learnt and was now teaching German, encouraged her to do the same. He asked her to invite a few friends over and make a fun activity out of it.

“My friends eventually dropped out because they found it very stressful, but I stuck on. I never thought I would complete all the levels, but I did — all the way until I was qualified to be a teacher,” says Bandopadhyay.

She powered through, making new friends and realisations about herself. “I loved being friends with people my son’s age — I even went out to party with them, and all of them would share things about their lives with me. The difficult part was the actual studying. Your grasping power reduces considerably with age – something I realised as I studied with students much younger than me.”

But with some private lessons from her in-house teacher, Bandopadhyay rocketed through the levels, and began teaching at the school.

“I have a renewed purpose in life now. And it isn’t just about teaching someone something new or having a new career post 50, my favourite thing is that my students trust me enough to confide in me. Even during lockdown, there are so many students who reach out to share their problems with me,” says Bandopadhyay who is now 53.

Apart from a sense of accomplishment, she also feels financially empowered. She says “I went for a German teachers’ conference to Sri Lanka, and I couldn’t stop shopping. My colleagues were surprised because there really weren’t too many unique things that we could pick up from there, so when they asked me why I was going overboard, I very proudly said that it was because this was the first time I was getting to spend money that I’d earned all by myself.”