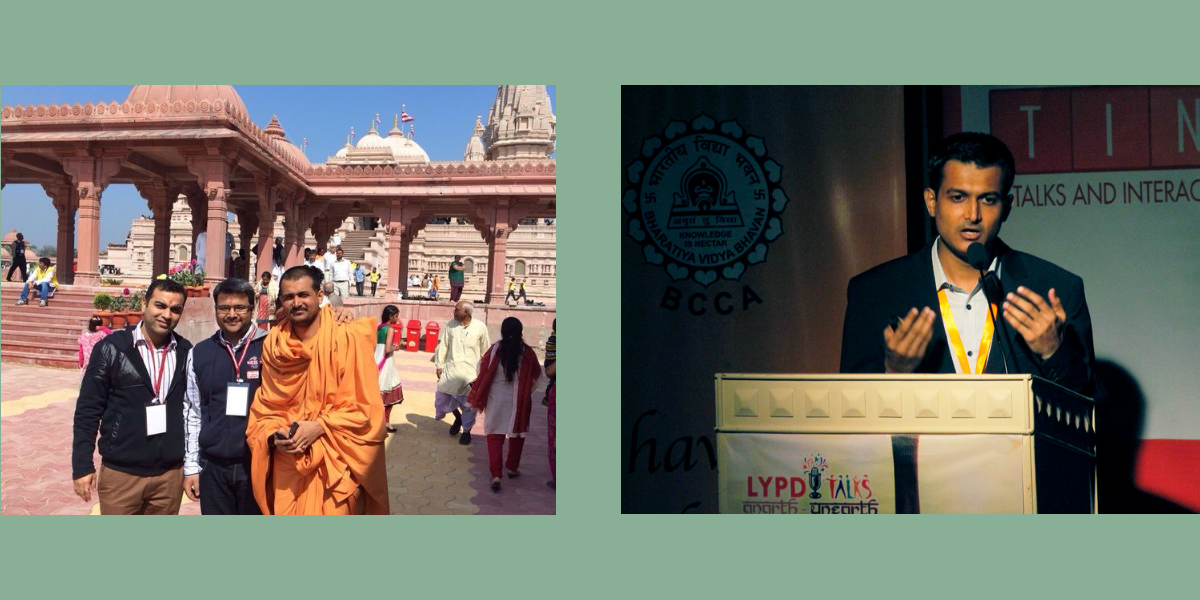 The extraordinary story of Paresh Rawal, in his own words

Imagine giving up material life as you know it to become a monk, spending 12 years on a spiritual quest before re-entering the life you left behind, and even joining a dating app.

At the age of 21, Paresh Rawal took samadhi, and remained a celibate monk for 12 years. The former monk now works in public policy and as a life coach — and met his wife online. He shares his incredible spiritual journey, and how he’s managed to embrace both sides of his identity, in his own words.

The former monk who is still very much a spiritual quest

“People usually make big career decisions at 21. But I was thinking about the purpose of life, metaphysical questions about why we exist, and I wanted answers. I was involved in social service at the time, and I wanted to completely dedicate myself to a cause, to somehow do good for society.

I was a spiritual aspirant, and saw religion as a mode to obtain these spiritual answers. Though they’re often used in the same breath, there’s a big difference between religion and spirituality. I realised it when I was a monk, and more and more since then.

I joined a Vaishnav organisation in 2002, when I was 21, aware of what I was giving up. My ties with my family. Embracing celibacy, after having been with women before. That’s part of why people revere you. That you’re doing something which is challenging.

You have to detach yourself from all your ties as that will limit your understanding of spirituality. You have a new identity and your only belongings are two pairs of clothes, and a wooden bowl for food. I went to a training centre where you live a disciplined, routine life, learn various religions of the world, the rules, the history, the philosophy.

There’s no ‘easy transition’. It may sound silly, but waking up early in the morning is the first hurdle you face, because that’s not our normal way of life.  But you change and you don’t even feel that it’s daunting because you know why you are doing it, what’s driving you.

For 12 years, I was immersed in that life. I tell people the reason I joined, and the reason I left are the same — spirituality. Spirituality is the reason I went there, so that kept me afloat through my time as a monk, but after all those years I began to ask myself — am I growing spiritually?

Organised religion creates certain boundaries and well… spirituality has no boundary. I have read many accounts of people who’ve left and they do complain about the religion that they join and they talk about the negative things. But at the end of the day, it’s up to you to take the positives.

So I thought of this as a 12-year-course on spirituality, rather than a lifetime affiliation with a religion.

When I returned to my old life, I struggled with a loss of identity. Psychologically and literally, because I didn’t have a PAN card, or my name.

There were also information gaps — I didn’t know what a multiplex was. Or IPL. My childhood friends had jobs, kids and made small talk, while for 12 years, I had only been discussing ideas and philosophies.

Over the last six years, I started over. I got a job at an HR firm in Kolkata, did a Master’s in public policy and slowly found my path. Started a couple of start-ups, and even worked with the Indian Railways on public policy. I even got on a dating app — where I specified that I was a former monk even though my friends told me it was not normal — and eventually met my wife, Bernadette.

Being a monk, I learned to be disciplined and have an inner dialogue. Have a minimalist approach towards life. I learnt lots of management skills too, especially during big festivals, where you have to manage the masses. I met all sorts of people, and it gave me a different perspective on life. It’s what helped me in my career as a life coach.

It’s like what Steve Jobs said, “Connecting the dots backwards” — but ultimately getting where you wanted to.”