So many video fails, so little time

The world giggled as Professor Robert Kelly’s children gatecrashed his live interview on South Korean politics with the BBC in 2017. Kelly become a legend for his composure, as his champion wife scampered to get the kids in order while he kept a straight face.

The joke is now on us as we’re all working from home and video call fails have become a way of life.

Though a wondrous way to keep us all connected us while social distancing, for the inexperienced, it remains a challenge — much like trying to decipher a doctor’s handwriting.

Zoom lecture, Skype meetings and Whatsapp video calls – we’re all still adjusting to having an audience of colleagues and peers while our partner strolls out of the bathroom in just a towel.

Without further ado, here’s a round-up of some of the funniest video calls that have gone viral around the world. All of these mishaps are giving us pointers on what not to do so let’s agree on one thing – pants are not optional.

Hilarious and highly relatable: the video calls taking over the internet

We feel bad for people that are working in front of the camera, because while the rest of us are lounging in sweatpants and oversized t-shirts, they need to make more of an effort. Will Reeve, an ABC reporter, was quite a Dapper Dan in a suit (compared to us in our shorts and sports bras).

As his piece for Good Morning America about drones delivery of medication was coming to a close, the graphics banner at the bottom of the screen got smaller, revealing to the audience his lack of, well, pants.

Reeve isn’t the only one who thought pants are optional.

Radio hosts of 98.7 The Bull in Portland, Oregon ended a Google Hangout video call with each signing off and wishing each other well. Tony Russell got up from his computer without shutting off the stream to reveal some pretty flashy underwear. His quick skedaddle out the room at the end had us (and his coworkers) in splits.

Reminders to double-check the mic and camera

Russell’s on-camera mishap should be a reminder for us to double-check whether we’re still on those video calls or not before doing something like going to the bathroom.

“Poor Jennifer” is putting it mildly if you ask us.

There’s also the mic. Whether you’re messing around with your partner’s computer or just can’t keep that groan in long enough for your professor to finish their lecture.

The struggling parents working from home

WCBS New York Chief Meteorologist Lonnie Quinn was doing a weather forecast from his home studio – a live forecast – when he had two unexpected guests on his show.

Honestly, his daughters were the delightful disruption that all weather forecasts need. If you’re going to tell us it’s going to be cloudy and gloomy for the next two weeks, let us hear it from an adorable toddler in a tutu at least.

Quinn had his hands full, trying to get his work done and babysit his kids at the same time while his wife was on a Zoom call of her own. They personified every parent’s struggle of keeping their children engaged through this lockdown.

What about a child yelling profanities during a video conference doesn’t scream professionalism?

My kid just walked into my video conference, yelled “look at my penis,” and hit the button on his fart machine. Working from home going really great!

Creating a workspace at home is an art. You want good light, proper seating and ventilation so you don’t get sweaty during those video calls. Gareth Barlow, senior reporter at BBC World, pointed out that before we jump on those calls, we should probably check what’s on our walls along with the video and mic as well.

Maybe it’s a spider, a weird shadow or an inappropriate artwork stealing the limelight.

If you do WFH and have a Skype meeting, always consider if the ‘art’ on the wall is:

A) In shot
B) Appropriate pic.twitter.com/CqRAvCV4AF

To spice things up, video conferencing platforms have created a whole bunch of filters and backgrounds you can use to liven up your video work calls. While some are your run-of-the-mill backdrops of the New York skyline and picturesque landscapes, other experiments can turn you into a potato. 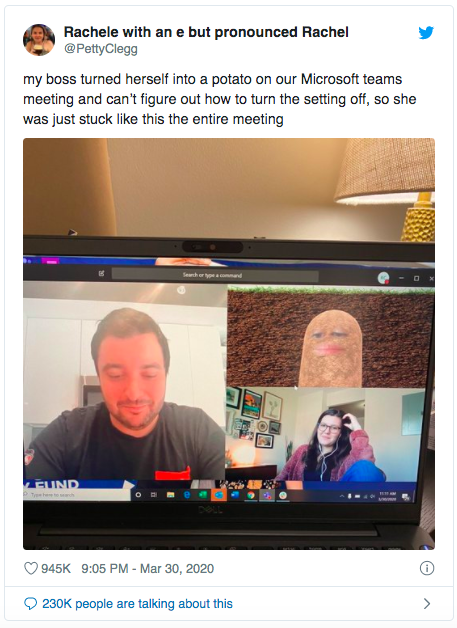 WATCH NOW – #ParentingFails from the kids who survived them