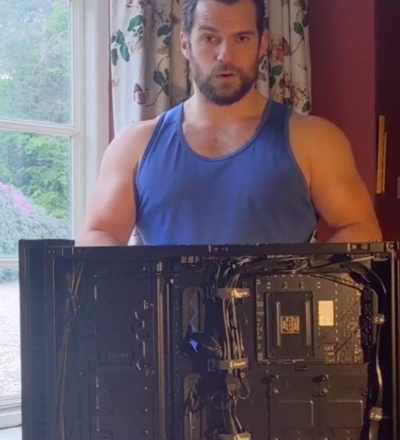 It’s day 143,043,102 of lockdown and Henry Cavill has broken the internet and my brain. My body was not ready for this.

Here I was just trying to meet a deadline, scrolling through my Instagram feed to find the post I needed to embed and I hear Barry White‘s sensuous voice, a musician that’s on everyone’s ‘sexy time’ playlist.

I was confused at first, the thumbnail of this video was a computer CPU. But then Henry Cavill walks into the frame and everything changes.

That music, those muscles, that tank top…

All other men can just stop trying now. Go home, it’s done. That’s it. We will not be requiring your services.

Because it doesn’t matter how many flowers you buy, planks you do or songs you write. It’s hard to be sexier than Henry Cavill playing with tools.

This kind of material isn't for everyone….viewer discretion is advised. You may see a lot of parts that you haven't seen before. #PC #AllTheParts #AllNightLong

It’s all so confusing. Henry Cavill’s muscle-bound arms working that screwdriver. His lockdown beard that’s as lush and well-groomed as a billionaire’s front lawn. That cocked eyebrow that send the signal to your ovaries to explode.

Henry Cavill, you have to know what you’re doing to us. There’s a reason why you’re handling those little chips with such a gentle touch, caressing those gold pins, furrowing your brow like a marble statue being sculpted by Raphael.

This is the video to end the battle of the sexes because there’s something for everybody to really enjoy. Maybe a little too much.

May need to rethink birth control right about now. Can you get pregnant through a phone screen?