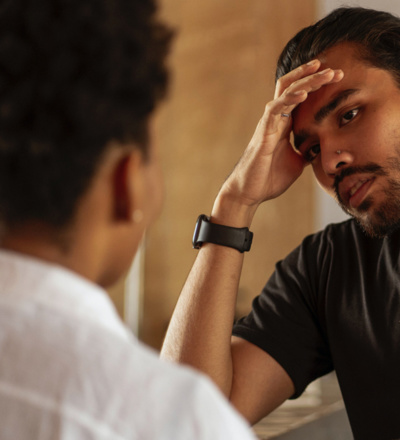 "I've been in a sexless marriage for over 8 years"

In this edition of Marriage Diaries, a woman describes her struggle to bring intimacy back into her 20-year marriage

My husband and I had a love marriage 20 years ago. I never thought it would one day turn into a sexless marriage. Respectful, loving and caring, my husband was the textbook definition of a good guy (and he still is). He takes care of each and everyone in the family. My people are his people.

Our first year of marriage was good… and I say good because we made love three to four times a week. By the end of the second year, I had my first baby and after another two years, I had our second child.

I didn’t realise at first but it was after the birth of our first child that our lovemaking slowly slid down a steep slope to Not Happening Pradesh. After the second baby, we got intimate probably once or twice in three months. Once it hit me, I felt extremely guilty. I was so involved in taking care of the children that my husband had been completely ignored. He never complained about it, and that made the guilt so much heavier.

Before I knew it, we had slipped into a sexless marriage, being intimate about once a year.

It’s been seven to eight years now since my husband and I have had sex. Penetrative, non-penetrative, embracing, being close – there is nothing.

Some men find it difficult to open up and talk to their partners but my husband and I have always had excellent communication. So of course, I brought it up and though he acknowledged how unfair the situation was, his only response was that he doesn’t feel like making love.

Dealing with a sexless marriage

I suggested we try going to a sexologist or a couple’s counsellor to talk about our sexless marriage but the very idea of it was shunned.

I took the initiative to get him in the mood by planning romantic nights, buying sexy lingerie, even role-playing. But nothing got a response from him.

I thought that our sexless marriage could be the result of his sexual orientation that he had kept hidden from me. If he was attracted to men then, I would be completely supportive, but he denied it.

Instead, his excuses focused on me. Every time I’d ‘try’ something, he’d throw a new reason at me. One time he said: “If you lose some weight, you will look hot”.

So I took that to heart, worked on myself and lost 11 kilograms. When that excuse didn’t work anymore he said, “maybe if you change your hairstyle”. That was then followed by comments about my skin, my wardrobe, and eventually, I realised these were just stalling tactics.

Tired of constant rejection and being sexually starved, I resigned myself to a sexless marriage, focusing my energy on my children.

That is, until one fateful night two years ago, when I got a drunken call from an ex-boyfriend.

The following day, we reconnected and spoke about everything that happened in our lives over the past 22-23 years. With so much to discuss, we started speaking every week.

On a trip to our hometown, I decided to meet up with him. We had parted ways because we knew our families wouldn’t accept our relationship.

It was a magical evening that reminded me of how much I used to love him. He held my hand and we kissed. I had almost forgotten what it felt like to be this intimate.

Something in me shifted that day. The feelings I had buried deep down came bursting out. I longed to be touched, kissed and hugged. Next time when we met, we ended up having sex.

It happened once and I haven’t met him since though we do call each other every once in a while. We were upfront with each other and stayed clear of any emotional siyappa.

The guilt of being unfaithful kills me. I shared this with one of my closest friends. She said I shouldn’t feel guilty. Nobody was going to give me a medal for living in a sexless marriage. And it’s OK to think about my needs once in a while.

Nobody talks about the difficulties of being in a sexless marriage. It’s like a slow poison that eats you up with growing frustration. We don’t talk about a woman’s desires. Because if she has sexual needs, then society brands her a kulta or kulakshani. A wayward woman who’s brought dishonour to the family name.

I don’t want to justify myself, but just start a conversation.

We’re going to be celebrating our 20th marriage anniversary next year. Do I walk away from the life we’ve built because it’s a sexless marriage?

This is an anonymous account as told to Sara Hussain.

Watch now – How to bring the spark back in your relationship