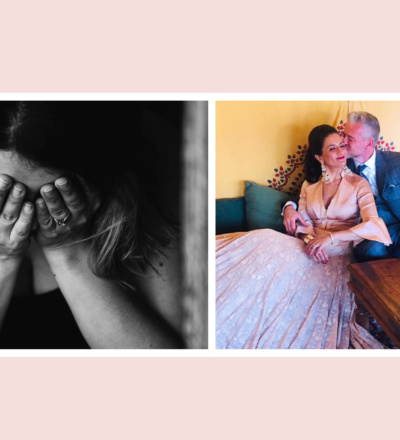 My husband's mistress got pregnant, and I had to look after her

Married off at 17 to a man she barely knew, 45-year-old Kajal Mehta spent 16 years in an abusive marriage — with four young kids, financially dependent on a ‘controlling, narcissist’ 12 years older than her.

She shares her inspiring story of finding the strength to start over, in her own words:

Not the Once Upon a time of fairytales

“I was raised in a simple Gujarati family in Kenya, the youngest of five sisters, with an alcoholic father and a strong mother. My sisters were all married off  young— none of them were happy but having no financial independence, they were stuck.

I was the only one privileged enough to study, and I dreamt of going to college and building a career. Then, my brother-in-law’s older brother saw me at a family party and told his family ‘If I marry, it will be this girl’.

He told my mother he’d let me study and would move us to England for a better life. She wanted me to ‘settle down’ and though I resisted endlessly, they gave me no choice, even changing the locks to my house.

He was a politician — well-known, feared and well-connected.

Our first week as a married couple set the tone for the rest of our abusive marriage — he dictated what I wore, where I went, who I met (I had to cut off from my friends), how much I spent of the allowance he gave me.

I was his property — a trophy wife who cooked and bore him children. When I asked about his promises of letting me study, he shut me down with a ‘You are my wife now, life is different’.

I was a virgin, with no knowledge of sex and love, beyond what I’d seen in films. But this was nothing like those romantic stories. There was no foreplay, no concern. It was just sex to him.

I told my mother he was strict and uncaring, and she said, “You have to abide by his rules and make him happy. The doors in this house are closed for you”. Her generation had a different mindset, and she taught my sisters and I to never speak ill of our husbands.

I had my first baby at 18, and three more in nine years. After two miscarriages, the doctor said I was weak because I was having kids too quickly, but my husband insisted I was strong and he knew what he was doing.

Kids changed my life. After they were born, we moved to England, which was a huge change. Seeing a modern, independent world where women are treated very differently. My husband’s power, work and money was all in Kenya, so he went back and would visit us every six weeks.

During one of those visits, he met an uncle of mine. The uncle started visiting us, bringing along his young college-going daughter, my cousin *Reema, who became my friend.

So imagine my surprise when I got a call from my mother-in-law in Kenya — saying Sanjay had been staying in our home there with a cousin of mine.

It was Reema. He explained that he’d met her at the airport, discovered she was staying in an unsafe area and brought her to our home. His demeanour changed — he was sweeter, speaking to me nicely, even trying to explain himself. I was touched by his consideration.

Until I received a call from Reema, saying she was in love with my husband.

Everything in my gut twisted. I was shaking, terrified about my future. Sanjay denied everything, insisting that Reema was having a mental breakdown, and threatening to commit suicide.

I supported him, because of my kids.

One fine day, he arrived in England at our home, Reema in tow, wearing sindoor. He told me she was bipolar and that we had to take care of her until she recovered. He kept telling me he wasn’t in love with her but his actions proved otherwise. I wanted to die, feeling I had no respect in his life as a wife.

At some point, Reema got pregnant and I don’t know if he was ashamed but he refused to take her for check-ups, and left me to look after her while she was pregnant. She miscarried.

After four years of living in this abusive marriage, he told me he’d look after me financially, as long as I accepted her as his second wife.

When he brought papers for me to sign, that allowed him to marry her because I was apparently mentally unwell and unfit to look after my kids, I became a woman possessed. I don’t know what struck me but for the first time I stood my ground. I refused to sign. He threw a glass pot at my head, left me bleeding on the floor, and fled.

Rebuilding my life after an abusive marriage

That became a police case, and he was arrested. I was shattered, and in no position to make money or take care of my children. Then a friend said the words I’ll never forget, “If you sit here and show that you’re depressed and not capable of looking after your children, you will lose them.”

I began juggling three-four jobs a day — cooking at people’s homes, delivering magazines, looking after kids, working at a store.

I sold my jewellery to buy beds, cutlery and whatever else I could. Even though we went from living in a mansion to poverty, we were happier because we were free.

I qualified as a massage therapist and reiki healer, I started teaching baby yoga, baby massage and finally started my own business — Kajals Health Kitchen.

My husband had disappeared, offering no child support because he proved bankruptcy. The last time I had spoken to him was four years ago. I decided I was going to forgive him to free myself, because even through my progress, the bitterness and anger that I had, felt like a block.

So I forgave him. And told my kids to do the same — because we needed to be free .

I feel so blessed to raise four kids as a single mom, without any help from my family.  I refused to give up because I wanted to prove that a single woman resonates bravery, strength and love.

My kids have been my biggest support and best friends. I owe them everything — even my current partner of seven years. They told me I needed to make friends and find a partner, not so that they could have a father figure, so that I’d have companionship.

Today, I’m earning well, have my own business and live in a beautiful big house. I’ve embraced the lessons I learnt through the terrible ordeal — they’ve built me up to become a stronger, empowered person.