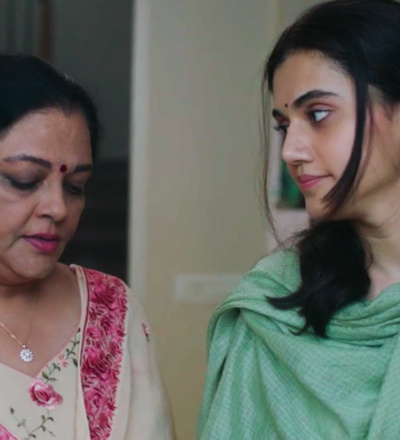 "My mother-in-law moved in with me after the divorce"

In this edition of Lockdown Diaries, an unlikely duo gives us a peek into their enduring relationship

India’s TV industry is built on saas-bahu stereotypes. But Shalini Chopra’s story is so unique, you’d dismiss it as unbelievable if it was streaming on Netflix. When Chopra’s husband left her for another woman, she was heartbroken. It shattered the illusion of her happy marriage and meant the upending of the relationship she had built with her mother-in-law.

The dissolution of a marriage or relationship often means breaking of the bonds you’ve made with members of your ex-partner’s family.

Losing her parents in a tragic accident when she was very young, Chopra had sought comfort in friends and extended family members who took care of her. “I finally felt what people meant by ‘mother’s love’ when I got married at 21,” she says.

The love was mutual. Her mother-in-law, Madhu Ghosle* says she always wanted a daughter. After her son was born, she and her husband wanted another child but life and other financial responsibilities got in the way.

“Shalini entered our lives like a firecracker. She was jolly, energetic and so loving,” says Mrs Ghosle. “When my husband passed away and I moved in with them, she was my rock and has cared for me through it all.”

After 24 years of marriage, Chopra filed for divorce after her husband sat everyone down last year and asked her to leave the house. She was forced to walk away from the life she had built and the only mother she knew.

Cut to the announcement of lockdown and she got a call from her former mother-in-law asking if she could move in with her. Half an hour later, Chopra was parked outside her old house. The 44 year old and 71 year old have been living together since, and couldn’t be happier.

My friends were always jealous of the relationship I have with my mother-in-law. They ask me ‘how do you get along so well?!’ I say, ‘kyunki saas bhi kabhi bahu thi’.

We filled a void that existed in each other’s lives. I lost both my parents when I was very young and always craved that kind of relationship. She always said I was the daughter she never had. Five years after we got married, my father-in-law passed away. We didn’t want her to live alone and moved her in with us.

Some people would be worried about having their mother-in-law living with them suddenly, but I was more than happy. We coexisted beautifully. She helped bring up my son, we cooked together, chatted in the evenings over tea and she would even oil my hair. I became like a little girl sleeping in her mother’s lap (even though I was now a mother myself).

My ex-husband travelled a lot for work. The night when he called a ‘family meeting’ to tell us that he’s breaking up the family because he met someone else, I felt my mother-in-law’s hand reach out for mine.

There was screaming and shouting between her son and her, but I knew I had to leave that night itself. She held onto me as I packed my bag and cried when I left. Not over him, but because she was losing me.

We’d still call each other from time to time but I felt like I had lost my mother all over again. The night the lockdown was announced, I got a call from her. She was tearing up and said ‘I don’t want to be here, please come get me’.

I jumped in my car and drove over. She had already spoken to my ex-husband about it and after some arguing, he agreed (apparently, there’d been some discord with his new partner).

When we got to my house, we hugged for five minutes straight. It felt like nothing had changed and no time had passed.

With my son living abroad, I would have been alone through lockdown but now I have her with me. We look out for each other, she helps around the house in whatever way she can. Even if I’m the one doing most of the heavy lifting, I’m just glad to have company, especially hers.

People have said, ‘oh, she will just want to you take care of her and do all her work which someone in the other house would have said no’. They don’t always understand, and that’s ok.

We watch TV together, tell each other stories and even have a little wine and dance time when we get too carried away. I may have been disillusioned by what I thought was my happy marriage but I know the relationship I built with my mother-in-law is real and will last beyond that.

People think, ‘how strange she left her son and is living with his ex-wife’. But I don’t care, I know where I am wanted, where I am loved and will be happy. She is not my daughter-in-law, but my daughter. I chose to stay with her even after they separated.

She gave me kindness and attention when I needed it. She will say we always got along so nicely, but that’s a lie. We have had our share of fights. All mothers and daughters fight but family is family and we resolve it.

It wasn’t a difficult choice for me to make between living in my son’s house and staying with Shalini. As a mother, I will always love my son but he has made decisions that I cannot stand by.

We are still in touch, he calls and checks in on me. He also knows that I am happier living where I am now.

In the morning, we have chai together and she reads Whatsapp jokes to me. We play rummy, watch Raj Kapoor movies and pass the time together. I try and help with housework, but at my age, with my arthritis, I can’t do much.

So I try and make it up in other ways, like trying to teach her knitting.

Living with Shalini, I finally feel like I am home again. I have a friend and daughter in her and we will get through this together with our health and happiness. If only she listens to me and stops smoking so much.