As a wise woman once sang, “You’re toxic, I’m slipping under”

The year is 2010. The keyboard of your Blackberry is threatening to give way as you furiously tweet at Kim Kardashian. Her bizarre streaky contouring pictures have led you to try painting your face like a zebra. Someone called Freja from Sweden is chipping in with her two cents in your replies, sparking a 10-tweet-long conversation about how to contour the right way. Twitter is your most favourite place to be and life is good.

As the years progressed, you stopped tweeting, let alone tagging celebrities in them. The noisiest social media site, which was founded as a way of sharing a 140-character life update with friends, family and a handful of strangers on the Internet, became “an outlet for bots, cyber abuse, breaking news, and journal-like musings from the former President of the United States” (before he was banned).

But now that Gen Z is online, can they bring back the good old days of Twitter like they did with bucket hats and pop-punk music?

According to a report by the Global Web Index, Gen Z’s topmost reason for using Twitter is keeping up to date with the world, closely followed by wanting to find funny and entertaining content. The millennial in you might want to retch violently at the idea of Twitter being used as a public journal, but Gen Z doesn’t seem to mind. As Shreya Joshi, a 23-year-old doctor describes it, “I started tweeting, not for the engagement or anything but to just let my thoughts out.” And I am not much different either. Being a Gen Z woman myself, my Twitter timeline is like taking a dip in an ocean full of controversial opinions and hot takes with some news whales swimming through, followed by schools of memes, one-liners and bottom-feeding TikToks. 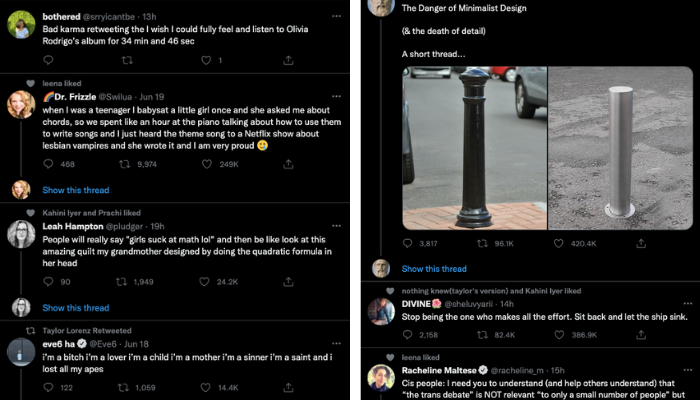 Ashutosh Pradeep, a 23-year-old computer engineer, first joined the site in 2013. “We were kids and everyone used to be crazy about Twitter back then so I joined it too but I’ve only become active on it after the pandemic.” He’s not the only one. I downloaded Twitter back in 2014 to follow news about One Direction and stopped using it after I aged out of the fandom. Many others like me gave up the site because we felt it wasn’t relevant to us anymore with its corporate culture environment. I found my way back to it in late 2019 when coronavirus had just started spreading its roots. As soon as the pandemic was raging in full flow, almost everyone in my circle had made an account on Twitter to shitpost while keeping themselves updated with the goings-on in the world.

Twitter’s internal data proves that nearly half of all tweets sent over the course of the year May 2020-May 2021 came from users aged 16 to 24. According to a Twitter spokesperson, Gen Z comes to Twitter for real conversations and connections. “Whether it is finding a community to study with, mobilising aid for people affected by the pandemic, or getting opinions around the best 7-11 snack. They have a huge stake in the conversations on the service and are also the most eager to engage with content — whether retweeting or favouriting a tweet.”

Ratan Priya, a 24-year-old journalist who describes herself as a cinema and noodle junkie on her profile, says her favourite thing about Twitter is reading the diverse takes on the most random to the most important things, whether it’s about trans women in sports or the kind of bowl she likes to eat her ice cream in. “It’s the small things we all think about sometimes but we feel they’re not worth expressing. Then someone else does, and you think, ‘Yeah, I get that’.”

Most of Gen Z on Twitter take pride in tweeting like Kim K circa 2010 — their unfiltered thoughts finding refuge on their Twitter timelines. As Pradeep says, “It was like chatting but on the timeline.” They like knowing that someone in the world might read their thoughts at any given moment and feel like they’re not alone. Tanvi Chakraborty*, also a 24-year-old journalist, finds it reassuring to read strangers’ innermost thoughts and find herself reflected back. “Twitter is mostly just screaming into the void and based on how famous or infamous you are, having people scream back at you.”

The micro-blogging site has recently hired Michael Sayman, American software engineer and tech world’s teen savant, who told the Washington Post about how different a product Twitter is for young adults. “The value I’ve seen in Twitter is that there are a lot of young people who use it that feel liberated by the lack of pressure to be super perfect, or have the perfect appearance.”

Sophie Smith, a young PR professional based in Cornwall, and Leena Gupta, an advertising creative based in Bangalore are separated by an entire continent but both of them have found they prefer Twitter because of its “openness” and “transparency”. “I like how Twitter doesn’t feel algorithmic as compared to other social media sites. My timeline has funny TikToks and important conversations happening around the world, which I wouldn’t be able to see if not for Twitter,” says Gupta.

Most of them prefer Twitter over other “manufactured” social media sites like Instagram, which are infamous for providing a more polished and curated view of a person’s life.

Do you remember when you would make friends with people in the other corner of the world because their opinions were as wild as yours? Gen Z has had a similar transition, except with their colleagues. Gupta didn’t meet any of her colleagues in the first two years after joining her job due to COVID but Twitter helped them get acquainted with each other. “I have rarely worked with some people in my office but reading each other’s thoughts on Twitter has made it feel like we’re best friends.”

happy father’s day to this one creative at mamagoto pic.twitter.com/UVSyaF993W

Although most of them were newly employed for the first time during the global lockdown, it hasn’t held them back from talking about the things that matter to them. Priya was recently advised to sanitise her personal profile and “make it more employer-friendly” but she refuses to do it because she “doesn’t want to appear as something she’s not.”

Twitter saves your activity like a trail — your likes, retweets and past tweets are all out there for anyone looking to dig up your online presence for whatever reason, be they recruiters or incels who want to dox you (publicly reveal your private personal information). Some, like Pradeep, have changed their names and removed other personal details from their accounts to avoid the toxicity that the app is known to breed. Many other Gen Z on Twitter like Chakraborty prefer using alt accounts, Twitter’s version of a finsta (a casual Instagram account for close friends). “I can have an unbridled online experience under anonymity. Not that I misuse it, it’s simply to keep my online behaviour private,” she says.

Being the digital native generation doesn’t come easy when having everything stored on your timelines can put you in hot water in the future. The birth of the alt account has also given them the freedom to talk about the things they want to without aligning themselves with them. “I am highly cognisant of how much people change, especially in my age group through their 20s, so I do not want to risk writing things in ink yet,” Chakraborty says.

The millennials among you who got burnt badly from the toxicity of Twitter may find it difficult to gulp down the fact that most Gen Z on Twitter are there “to look for a laugh”, as Gupta says. But is it also not refreshing to hear that the younger generation is finding a place on the internet where they can freely be themselves without fear of rejection or worse, cyber abuse? You only have to scroll ten years down your timeline and you’ll find you weren’t much different either, ranting about the Harry Potter series coming to an end or the viral phenomenon that was Lady Gaga’s meat dress. If you care to take a page from the book of Gen Z, you can do it now too.