These young powerlifters can probably benchpress you

When I was 13, I was still struggling to read an analogue clock and accurately tell the time. I had to practice handwriting for an hour after school because none of my teachers could understand my scribbles. So consider me a bit sour but also incredibly in awe after hearing about two young girls powerlifting and thriving at the age I could barely tell time.

Noa Sara Eappen is 11 years old and Kasha Nia Sachdev’s 13, and they’re powerlifting in national championships with multiple wins and golds under their belt.

Cannot relate. At all.

I think the biggest achievement of my preteens was getting my period.

At age 28, I have the arm strength of boiled spaghetti so the thought of somebody half my age doing deadlifts greater than my body weight is incredible.

Even my mother who, in an earnest effort to cheer me up when I’m feeling down, will try to convince me that I could someday fart Chanel no.5, would agree that these are far beyond my capabilities.

Dr Syeda Ruksheda, consultant psychiatrist at Trellis Family Centre, says that kids mimic the behaviour and traits of parents from a young age. “You cannot yell at your child and expect them to stop yelling.” For me, that meant alternating between my parents’ stash of cigarettes so they wouldn’t notice their depleting supply. It’s an unhealthy habit I’m still trying to kick. But they can’t really be mad at me for doing something I’d grown up watching them do.

From the age of 8, Kasha watched her father, Nicholai Sachdev, at the gym shifting weights on his lifts. From playing with barbells, she started lifting them. It’s been five years since and her recent win of three golds at the national level has only further cemented her love for powerlifting. “There’s a certain rush of adrenaline when I’m under the bar,” she says.

Noa encountered powerlifting after tagging along with Kasha, her best friend, to the gym. “I wanted some physical activity during the lockdown, and I really enjoyed training with Kasha and her dad,” she says. Five months of dedicated training with Nicholai’s guidance created a transformation. She grew 6 inches, standing now at 4’8”. Kasha is already 5’10”.

“When I started powerlifting, if there was a heavy weight on the bar, I’d think to myself that I couldn’t do it, even though I could. My hurdles have been more mental than physical, and though it took some time, I managed to overcome them,” she says.

Powerlifting’s raw display of strength is not the most glamorous. There are three fundamental lifts – low-bar squat, deadlift and bench press. It’s demanding, testing and taxing — mentally and physically. Powerlifters channel their strength in these barbells, defying gravity tugging down on their weight.

For a long time, there was a debate in the scientific community about the participation of youth (children and teens) in a sport like powerlifting and weight training in general. Some cited the possible negative impact it can have on a still growing and developing body. The back and forth between experts focused on whether these activities can negatively impact growth plates, known as the epiphyseal plate, the developing tissue located at the ends of long bones which control the length and width of our bones as we grow.

But as more people joined the conversation and studied the impact of it on children, the tides have started to turn. If left unsupervised, then any sport or activity can injure you.

In a 2000 study, Avery Faigenbaum, a paediatric exercise scientist and professor at the College of New Jersey, writes, “If appropriate training guidelines are followed, regular participation in a youth strength-training program has the potential to increase bone mineral density, improve motor performance skills, enhance sports performance, and better prepare young athletes for the demands of practice and competition.”

In an interview with the LA Times, he talks about the 180-degree flip amongst most people in the fitness and medical community. “We now encourage children to engage in strength training to increase bone, tendon and ligament strength, all of which improve sports performance and reduce risk of injury.” says Faigenbaum, and the American Academy of Paediatrics agree.

The young powerlifters’ parents did their research before allowing their daughters to pump iron.

“There’s a misconception that lifting weights at a young age could hamper growth, or be detrimental. But there’s scientific proof that it’s the exact opposite. Powerlifting is done under strict supervision by trained experts, and the results are crazy,” says Rij Eappen, Noa’s father.

Our bodies grow through hell during puberty. A flush of hormones left me gangly-limbed, towering over most of my classmates, with hair sprouting in various places. With little idea of what was going with my body, I’d hunch over to hide within myself as much as I could.

Powerlifting has given Noa and Kasha the kind of confidence and self-awareness I wish I had at that age. “She’s (Kasha) taking care of herself, especially her eating habits. She decides whether something is good for her or not. This change in her thinking and approach to life will make a huge difference in the long run,” says Kavita Sachdeva, Kasha’s mother.

We’ve cycled the stops on the body positivity train from yearning for petite frames to embracing our curves, shunning size zero culture and adding ‘all bodies are beautiful’ to our social media bio.

But through it all, well-built, muscular and fit women still attract unwanted attention for having body types traditionally associated with masculinity.

The record-breaking Williams sisters Serena and Venus have been referred to as the ‘Williams Brothers’ by the head of the Russian Tennis Federation. Bani J got trolled for her muscular body and Michelle Obama’s arms have been the focus of insulting cartoons. 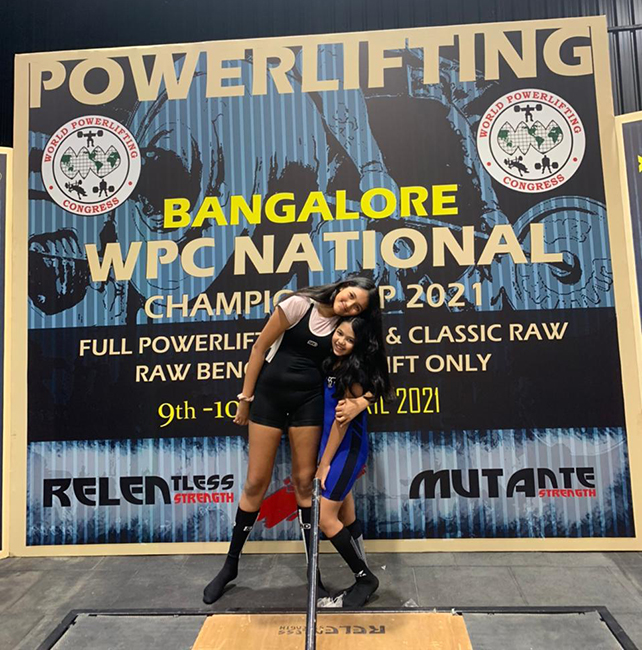 “Every parent should do their own research,” insists Kavita. “But I suggest you give your children a chance. It’s good for girls to be so strong, independent and aware of their capabilities.”

Rij agrees, asking parents give their children the opportunity to explore “off-beat, un-common sports and athletic activities when they’re young. You never know, the next world champion might be in the next room.”