Photo: Stills from (L) Sex/Life and (R) She's Gotta Have It
by Sara Hussain Watch

15 steamy TV shows that could be your next guilty pleasure

If lockdown-induced long-distance relationships taught us anything it’s that there’s more than one way to have sex. Whether it’s the run-of-the-mill penetrative sex with a partner or a solo session when you’re by yourself, what remains constant through all the forms of sex, is the need for foreplay. And what better foreplay than some visual stimulation? We’re talking about the growing number of steamy TV shows hitting streaming platforms.

Bridgerton really set the bar high for erotic TV shows, not only period dramas, leaving audiences with a thirst for more. It also proves that the really steamy TV shows are the ones that don’t just rely on nudity and full-blown sex to get the hormonal ball rolling. We’re talking about those that build up tension like it’s the last two minutes before the bell rings in your 12th grade board exams and you can barely feel your fingers wrapped around the pen. The steamy TV shows that play on the romantic tropes we may not openly admit to enjoying, revving up the engine of our imagination.

There’s such a variety to choose from as well now. Want to get lost in a distant land and have a mysterious strapping Viking take you on as a lover? Live vicariously through Outlander. Ever wondered what it would be like to be in a polyamorous relationship? She’s Gotta Have It can answer some of those questions for you. How is it possible to get turned on while watching something that has no sexual content at all? Well, we’re still trying to answer that question ourselves after watching The Bear.

Period dramas, dystopian futures, warlords and adult animated shorts, you want to make sure your wi-fi connection is ready. 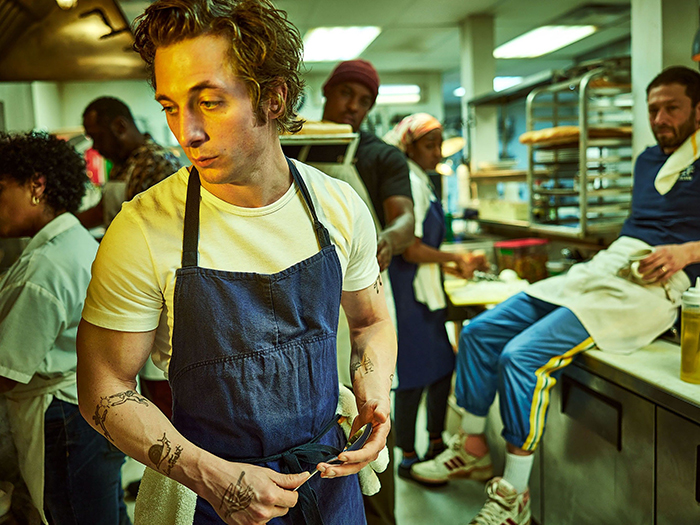 This series centres on a super successful young chef (Jeremy Allen White) who returns to his hometown to revive his late brother’s floundering sandwich shop filled with quite a motley crew of staff. For a show with no real nudity or sex scenes, it’s got a lot of people sweating.

Maybe it’s Allen White’s form-fitting t-shirts, tattoos and dishevelled hair, or the fact that you just want to give him a hug (and more) when he tries to do good by his late brother while also being a bit of an ass.

TV writer Alex Zaragoza put our feelings into words best when she tweeted, “I’m too scared to watch The Bear because I’m actively in therapy to stop falling in love with men who look like this.” We hit the ‘like’ button on this one while emotionally dry heaving. 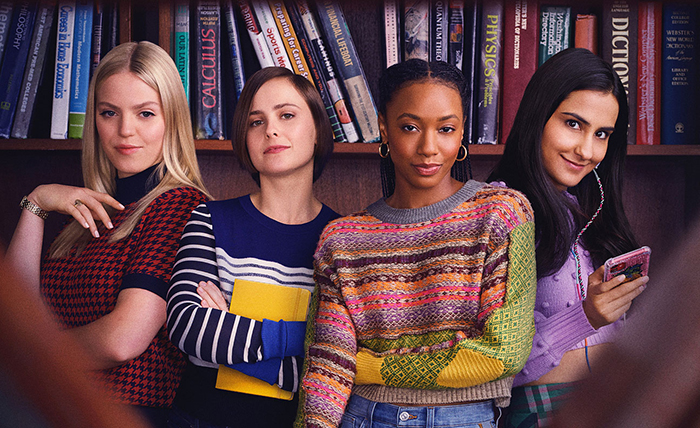 The Sex Lives of College Girls

The series focuses on four girls at Essex College who are exploring their identity and sex lives on campus. The series by Mindy Kaling offers up likeable and relateable leading ladies with vastly different personalities.

Difficult topics are tackled in the show, such as sexual harassment, gender and sexual identity, and taboo sexual relations between a student and teacher. But it’s handled with empathy and in a realistic way. This show has a humourous vein running throughout with a slew of intimate scenes – a given considering the show’s title. But as critic John Doyle notes, it’s anchored by emotions, fun, and friendship rather than the raunchy nature of it all. 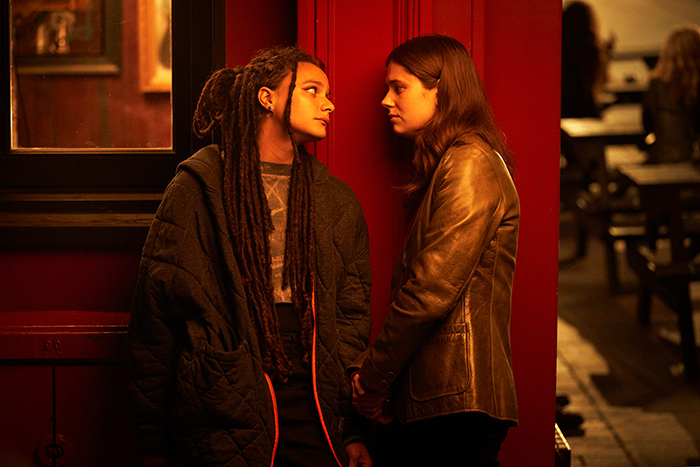 The Hulu series adapted from Sally Rooney’s book of the same name features an incredibly good-looking cast. It tells the story of two ex-lovers turned best friends, played by Sasha Lane and Alison Oliver, who get into an entanglement with an older married couple, played by Jemima Kirke and Joe Alwyn. The love… quadrangle includes a lot of kissing, nudity, groans and moans.

But what makes an intimate scene written by Sally Rooney so steamy? It’s probably her characters’ inability to communicate their longing. There’s plenty of build-up – a stolen glance here, gentle caresses, even cold beer bottles pressed against warm skin. It’s those small moments that really make the steamy scenes pay off. 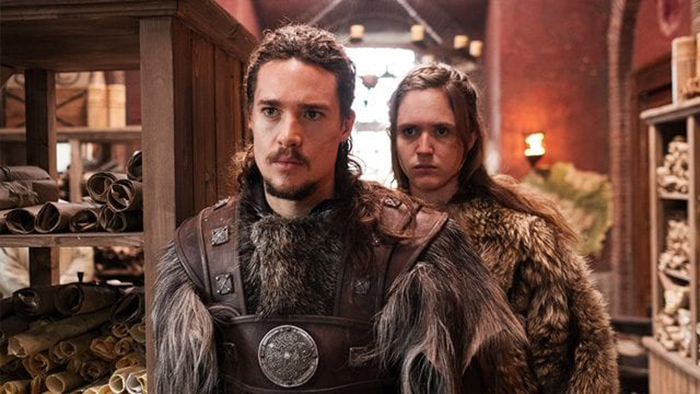 If Game of Thrones and Vikings had a baby, it would be The Last Kingdom.

The historical drama follows the invasion of England by the Danes who capture a young Uhtred, the successor of the Saxon earldom. Warlord Earl Ragnar raises him as one of their own (like Theon Greyjoy) on a Danish camp, but years later, his loyalties as put to the test as Uhtred is faced with a tough choice: whether to take back his ancestral land or defend the legacy of his adopted family who raised him, – that is, after orphaning him in the first place.

The show is a cinematic masterpiece and the storylines as rich. But you’re here for steamy TV shows, so be prepared to get pretty primal with this one. There’s blood, violence, lots of nudity and sex to fill the GoT holes in our hearts. 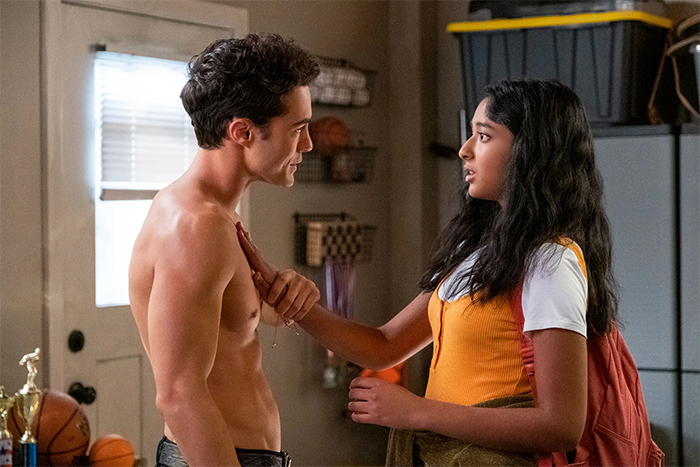 Never Have I Ever

Our protagonist Devi, played by Maitreyi Ramakrishnan, is crushing hard on the school hunk Paxton Hall-Yoshida, played by Darren Barnet and decides that it’s time to up her social quotient by losing her virginity.

But as 15-year-old navigating grief, high school and her own mixed identity, it’s easier said than done. Watch it for the South Asian representation, a throwback to your hopping high school hormones or the highly relatable and at times hilarious family dynamics. 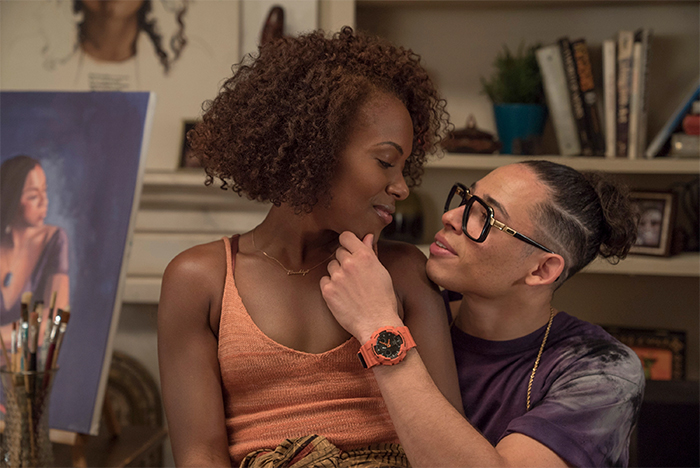 She’s Gotta Have It

If you’re a believer in ‘the more the merrier’, then this is a show you will thoroughly enjoy. Created by Spike Lee, based on his 1986 film of the same name, the show focuses on the escapades of Brooklyn-based artist Nola Darling who is trying to cement her identity in the world while managing her relationships.

She grapples with her own identity, her friends, and her three male lovers. Darling is polyamorous, and each of her lovers is vying for her attention, attempting to make her commit to them alone. But through the back-and-forth you get a lot of intimate scenes that Lee films beautifully. 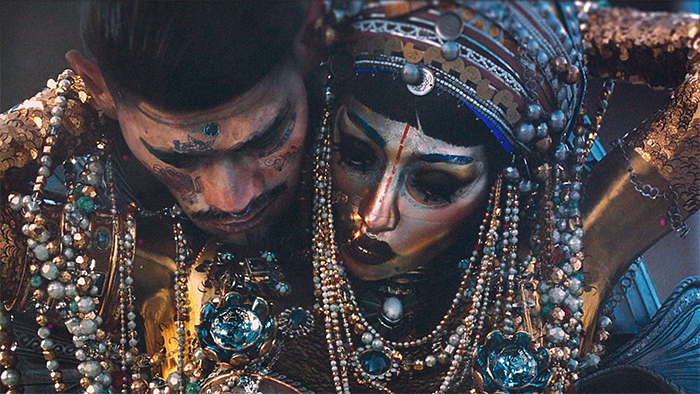 The adult animated anthology has given us several memorable shorts over the years. Some are hilarious, others apocalypti,c and some deserve a top-tier spot in the steamy TV shows section.

There are raunchy almost-sex scenes and straight-up sex scenes interspersed with violence and dystopian landscapes with lots of nudity. But there’s something about it being animated yet so life-like that makes things saucy even if the overall theme of the short has nothing to do with sex. 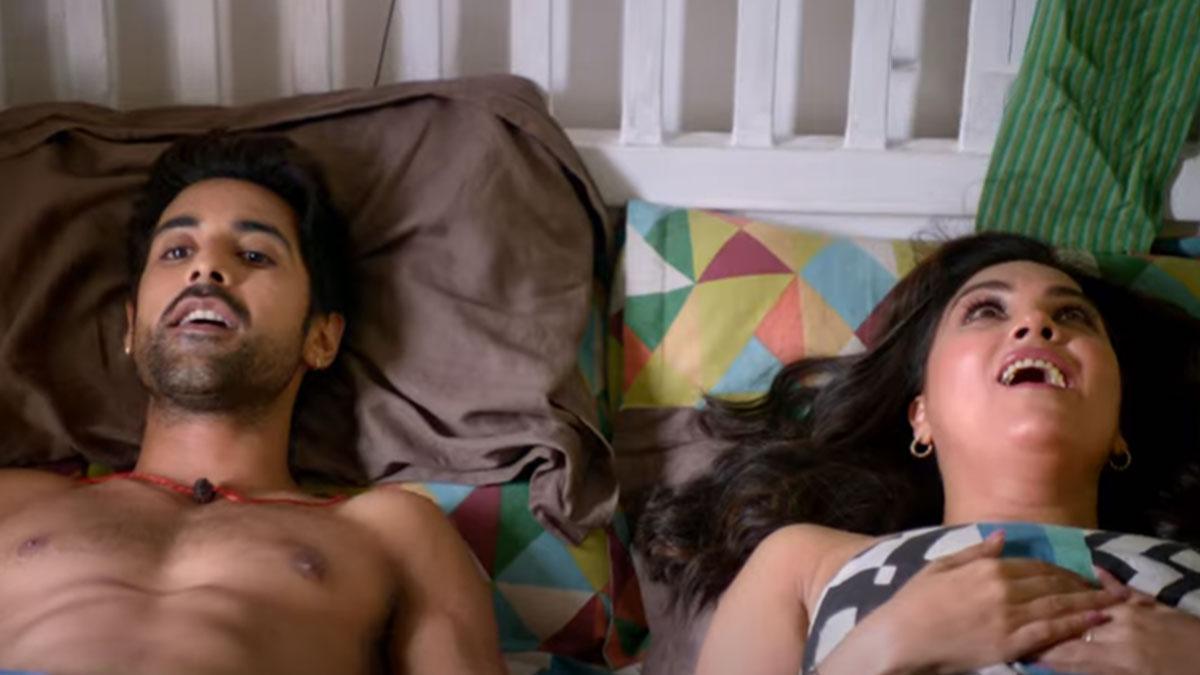 A remake of the Hulu series Casual, Hiccups and Hookups is a light-hearted almost endearing show that raises temperatures not with any nudity – it’s all pretty PG – but with its plotline.

Our protagonist, played by Lara Dutta, is a middle-aged, recently separated woman, living with her brother and teenage daughter. Back in the dating scene, she’s out to explore her newfound singlehood through dating apps, set-ups, and casual encounters with men of all ages while trying to figure out what exactly she wants.

Some people were up in arms because of the sexual nature of the storyline, but there isn’t any nudity or depictions of penetration in this show. It’s the openness with which a woman, mother, and former wife, is embracing and freely talking about her sexuality which has people either screaming foul or cheering along for finally having that portrayed on Indian screens. 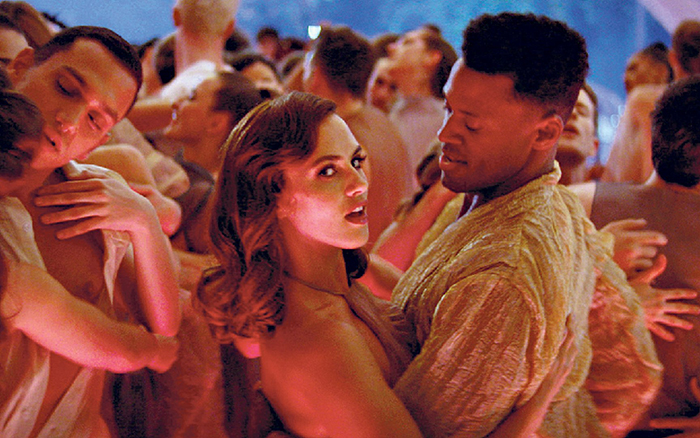 Diehard fans of Aldous Huxley were disappointed in the TV rendition of the cult classic book but given just how layered the book’s narrative is, it was always going to be a challenge to do the source material justice. So go into this show with an open mind.

The narrative teeters on the mundane after a point (especially compared to the richness of the book), but the futuristic world that the show creates is a spectacular sight to behold. 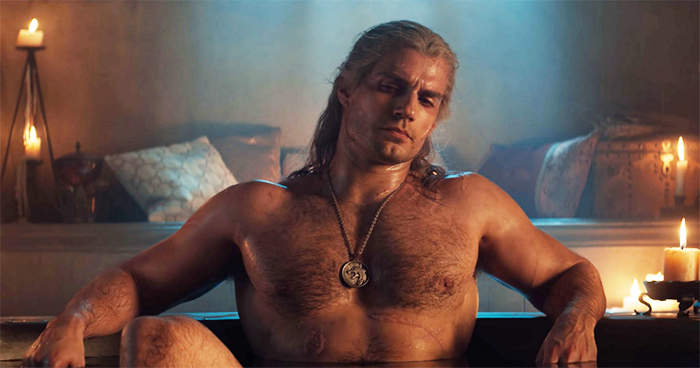 People questioned Henry Cavill’s casting as Superman, but as Geralt of Rivia, the stoic, grumbling, mutated monster hunter for hire — the eponymous ‘Witcher’ – he was welcome with open arms. But that could have less to do with his acting and more to do with him being naked and broody through the show.

If naked Cavill doesn’t have you convinced (we get it, sometimes you need the plot to go along with the eye candy) then maybe the fictional land known as ‘The Continent’ will have you hooked.

The show is based on Andrzej Sapkowski’s book series and features rivalries between kingdoms, witchers, sorceresses, and cursed monsters, all woven around the Witcher in question.

This show definitely lives up to its name. There’s a lot of sex, graphic sex. It’s based on BB Easton’s memoir 44 Chapters About 4 Men, though the show amps up the drama. We follow married housewife Billie, played by Sarah Shahi, who has a seemingly perfect life: a lovely, handsome husband who’s an investment banker and two children that keep her occupied at home. But she’s also going stir-crazy in this domestic life.

It triggers a midlife crisis as she starts to think back on her previous relationships and wild-child youth. Going through her past life, she fixates on one particular leather-jacket-wearing, motorcycle-driving bad boy ex Brad, played by Adam Demos, and she starts journaling more about her relationships. 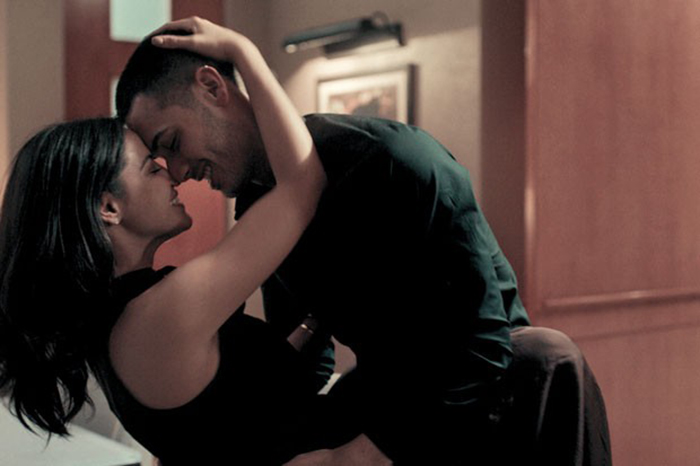 You follow the protagonist Alma, played by Maite Perroni, as she tries to uncover the truth about the death of her best friend Brenda, played by Maria Fernanda Yepes. The police ruled it a suicide, but Alma thinks otherwise. Through the course of her detective work, dark secrets are unearthed, all interspersed with a lot of nudity and sex. Is it Alma’s husband who killed Brenda? Maybe it’s her brother-in-law who is also Brenda’s lover? Or maybe it really was a suicide as the police say, but the reason behind it remains unknown.

If you’re fond of erotica and crime, this show is definitely a must-watch. 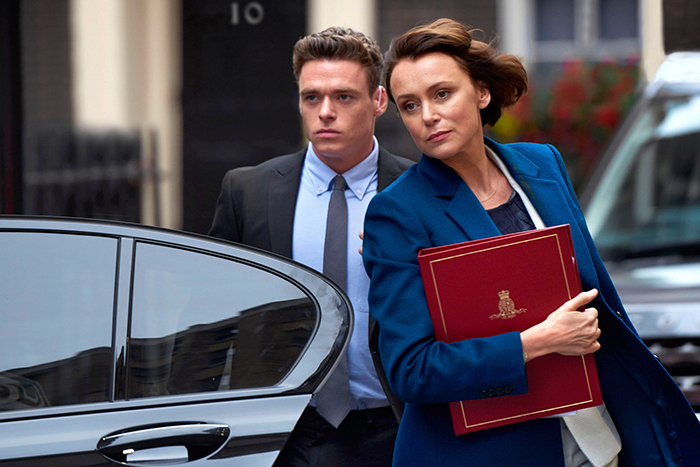 Madden portrays police sergeant David Budd, a war veteran with PTSD enlisted to provide security to Home Secretary Julia Montague (Hawes). With opposing political viewers, you can almost see the romantic trope of enemies-to-lovers playing out. Madden is stoic and mopey while Hawes is independent and ambitious. And just as they get together, everything starts to fall apart.

Listen, you can be a strong independent woman and still get butterflies in your stomach (and more) fantasizing about a man in uniform protecting you from the big bad world. 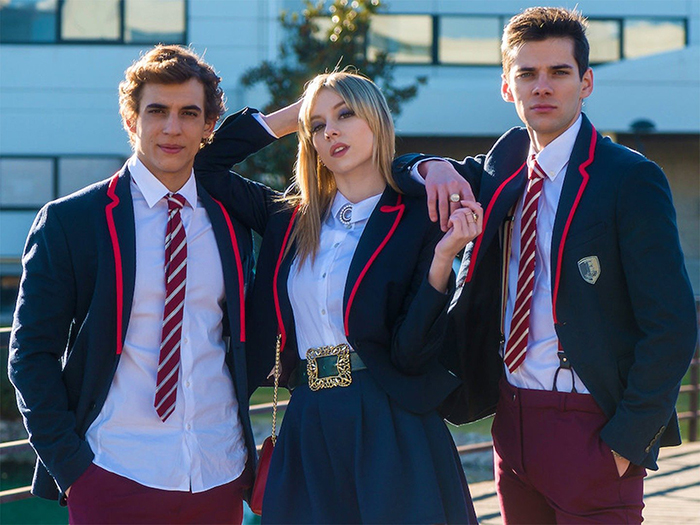 This is one ‘teen’ show you don’t want to watch with your teen (here’s what you can stream instead). The Spanish thriller show is set in a fictional elite private school. Samuel, Nadia, and Christian, played by Itzan Escamilla, Mina El Hammani, and Miguel Herran, respectively, are working-class students who end up getting through to the exclusive school through a scholarship after their own school building collapses, and soon come head-to-head with their wealthier, snooty classmates.

But the clash ends in a murder and the show goes through time jumps as you watch the student’s interactions. Secrets come up, sexual escapades unfold and tensions rise as envy grows. 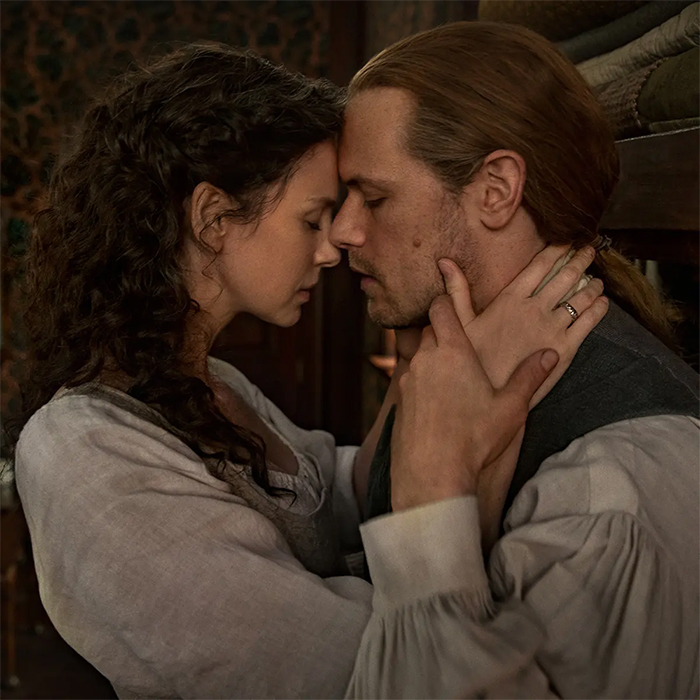 What list of steamy TV shows would be complete without a mention of Outlander?

The historical drama is based on Diana Gabaldon’s book series and follows Claire Randall, played by Caitriona Balfe, a WWII nurse who accidentally travels back in time to 18th century Scotland where she meets the true love of her life — highlander Jamie Fraser, played by Sam Heughan.

Along with trying to change historical events (they find themselves embroiled in the Jacobite uprisings), the show’s characters find plenty of time to make wild, rambunctious love. Some bordering violence and assault, so this isn’t a show for the weak of stomach. Watch for the sex, stay for the scenic vistas of Scotland and the accents.