This mom and her 7-year-old daughter love adventure sports, from diving with sharks to river rafting

As a child, Usha Rangaswamy wasn’t allowed many of the simple freedoms most kids take for granted. Her parents were overprotective, trying to protect their little girl. But now, she’d found a unique way to compensate for all the lost time — travelling with her daughter Riddhi, only 7 years old, and living vicariously through her (Have you read this story of a woman who travelled to 9 places in one year?) “We have travelled all over the country- from Coimbatore to Manali. Whatever I haven’t done, I want her to do. And everything that I haven’t done, I am doing with her.”

Rangaswamy believes that travelling with kids will prepare them for their future, a view she shares with education specialist Robin Hancock, who tells Travel + Leisure, “Travel has the potential to create a new narrative that teaches children about the similarities with others, laying a strong foundation, especially in the early years. We have the potential to raise a generation that knows how to live and coexist with each other.”

Most people wince with they hear the words ‘travel’ and ‘kids’ in the same sentence. Cranky toddlers stuck in a metallic tube 35,000 ft in the sky are ingredients to a nightmare many of us have lived through.

But Rangaswamy is challenging that perception, so we asked her for tips to help other parents turn their natkhat children into a version of Dora, the Explorer.

“Studies is not the only form of education”

My husband and I started travelling with our daughter when she was only one-and-a-half. We didn’t think we could travel with kids initially, but we’d feel horrible to leave her behind. Eventually, I started taking her with me. We started off simple by going to theme-based restaurants. Once she was comfortable, I took it up a notch with one-day trips. Then slowly, I introduced overnight stays at resorts. She was very comfortable and so gradually, we started going for longer trips.

We have travelled all over the country. Everywhere we go, I try to introduce her to new experiences and new activities. For instance, we’ve river-rafted in Manali, and also went up in a hot-air balloon. She’s also tried micro-light flying in Bengaluru. This is something she wanted to learn but she was too young to join the academy. Of course, they didn’t give her 100% control but she went all by herself with the pilot who let her touch the controls so she got a sense of what it’s like to fly a plane.

Riddhi is 7 now and I want her to have a taste of everything from this young age and not let fear hold her back. People always tell me she’s too young to be having these experiences but I want to expand her worldview. She can pick and choose what activities she wants to do or where she wants to go, I encourage her to try new things, but I never force her. 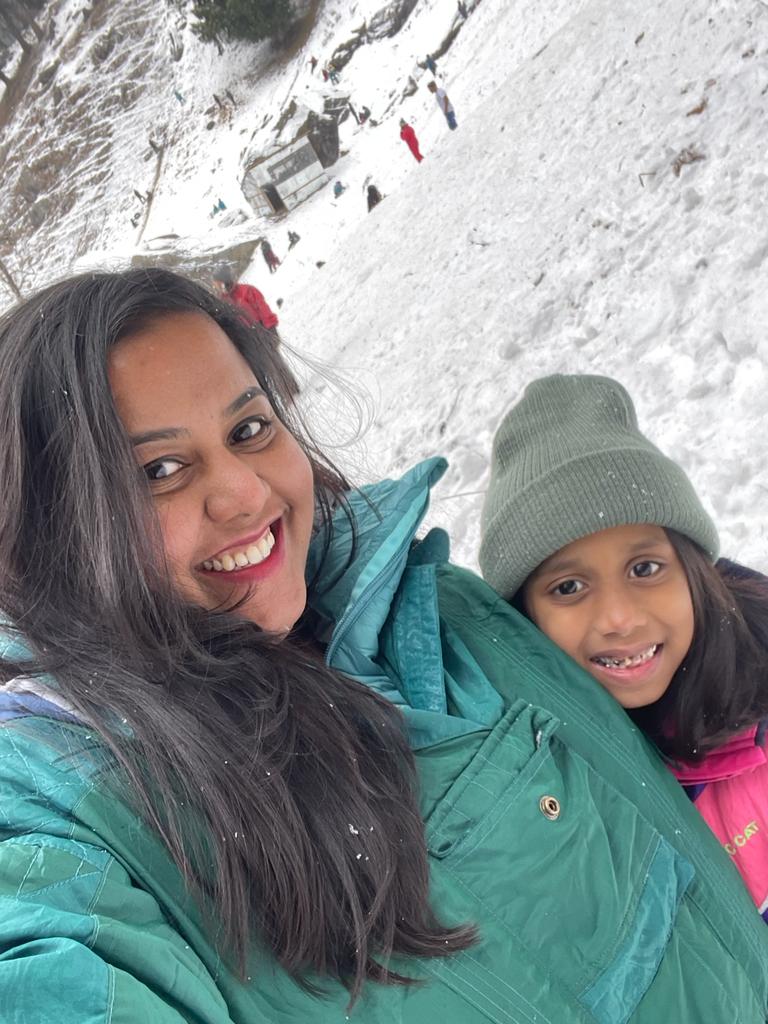 I usually do my research and give her all the information she needs. How she should behave, what we’ll be doing, how the place will look, what kind of food we’ll be eating. For instance, this time we chose the Maldives. We did snorkelling and other water sports. Before we went on the trip, she was scared of water, so I enrolled her in swimming classes. Once she learned how to swim properly in the pool, the instructors started throwing her into the water in such a manner that she’d go about 7 ft underwater and had to find her way up. This was to give her a feel of what diving and snorkelling will be like.

I would also fill a tub with water and show her how to hold her breath underwater. I try to prepare her for every situation so she isn’t caught off-guard. I also showed her images and videos of marine life.

She was not allowed to go diving, only snorkelling. But she made the most of it, even snorkelling with sharks. The instructors took a liking to her, so half the time I wasn’t even with her. It’s actually our favourite activity that we’ve done together. 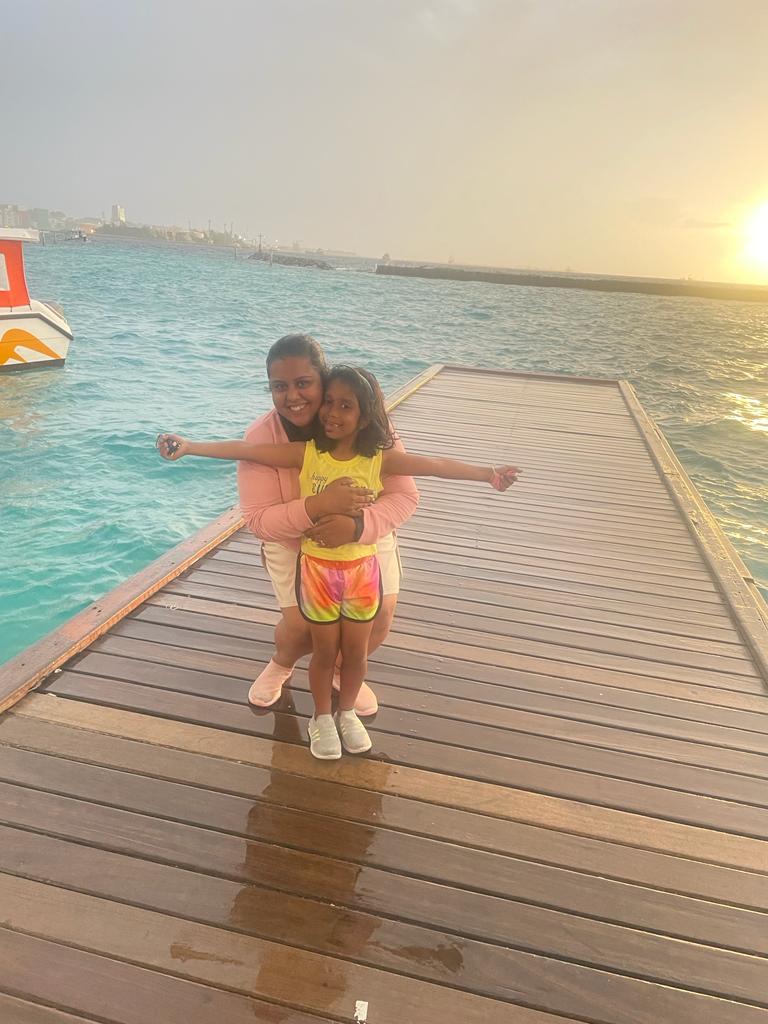 When I was a child, I wanted to do a lot of things but I could not do them because my parents were terrified. They lost two kids before me. So they were overly protective. They never let me do most of the things I wanted to do. They wouldn’t even let me go on school trips. I was a netball player and the only times I was allowed to travel was for matches. But I never had the opportunity to experience anything that was even remotely dangerous.

And so, whatever I wanted to do back then I am doing now with my daughter. I want her to have all the experiences I never had as a child. I soon realised that we enjoy a lot of the same things. I liked travelling with her. Now I take her with me everywhere I go.

Of course, my parents weren’t very happy with this lifestyle. Initially, when I first started travelling with her, they would call me about a hundred times. Especially when my daughter and I take off on my two-wheeler. Now, they are a bit more relaxed. Maybe they saw that I am actually a good driver and that I take all safety precautions when she is travelling with me. It’s been a gradual process and I’ve had to ease them into it in a similar way I eased my daughter into travelling. 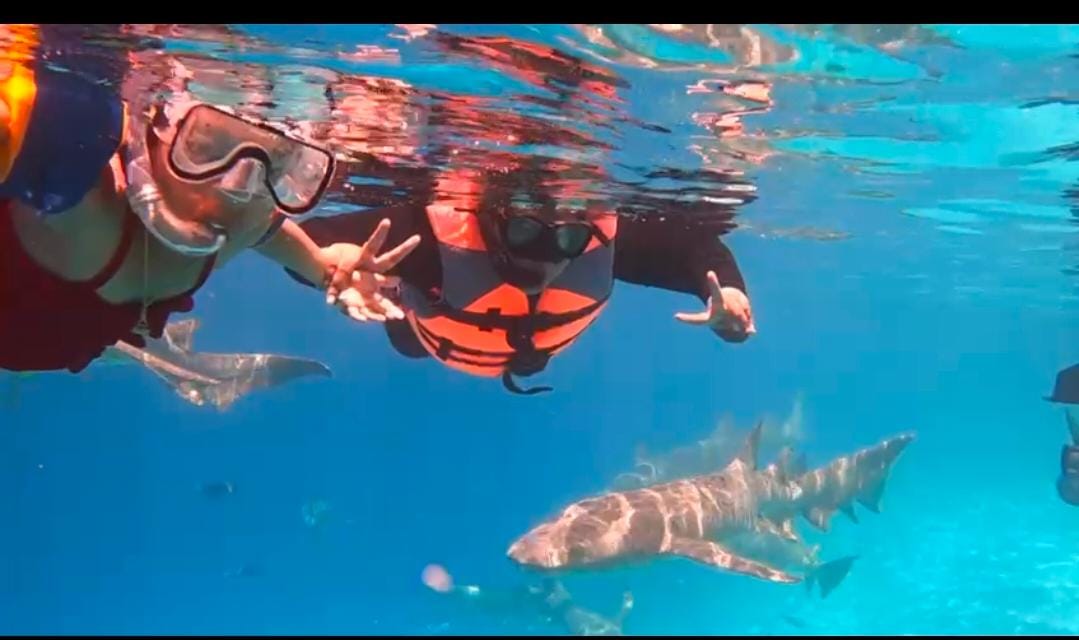 She has done quite a lot of activities. We wanted to do paragliding but unfortunately, because of the wind, we couldn’t do that. They also said that my daughter couldn’t experience it because she was too young. Whenever we go to do any of these activities, I am told she is only 7 years old and she needs to be a minimum weight. People believe that kids don’t understand how they should act or how they should react. But they are very intelligent. They do understand. And at the end of the day, it’s about how you explain it to them. It’s not about age, it’s about how you motivate and encourage them.

We scare our kids by telling them that it’s not your age to do these things and you won’t be able to learn these things so young. It’s why they grow up with so much fear. Even in Manali, they told me that she was too small to understand how to hold on and that she would fall. But I wanted her to experience river rafting and so after I insisted over and over again, they made me sign and declaration and consent form that said if anything were to happen, they wouldn’t be liable.

First, I made her sit between my legs. Once she understood and got used to the rough movement, I let her sit next to me. She held on to the rope too tight and of course, I was holding her the whole time. She wasn’t scared at all. In fact, she really enjoyed herself.

By default, she isn’t afraid of anything. Maybe it’s because I introduced her to so many new things at such a young age. And she is also well-behaved. I try to tell her how to behave when we go on trips with other people, I’ve tried to make her a people person. Of course, she is hesitant towards strangers as all kids are, but if you talk to her and she is comfortable around you, she will tell you everything. 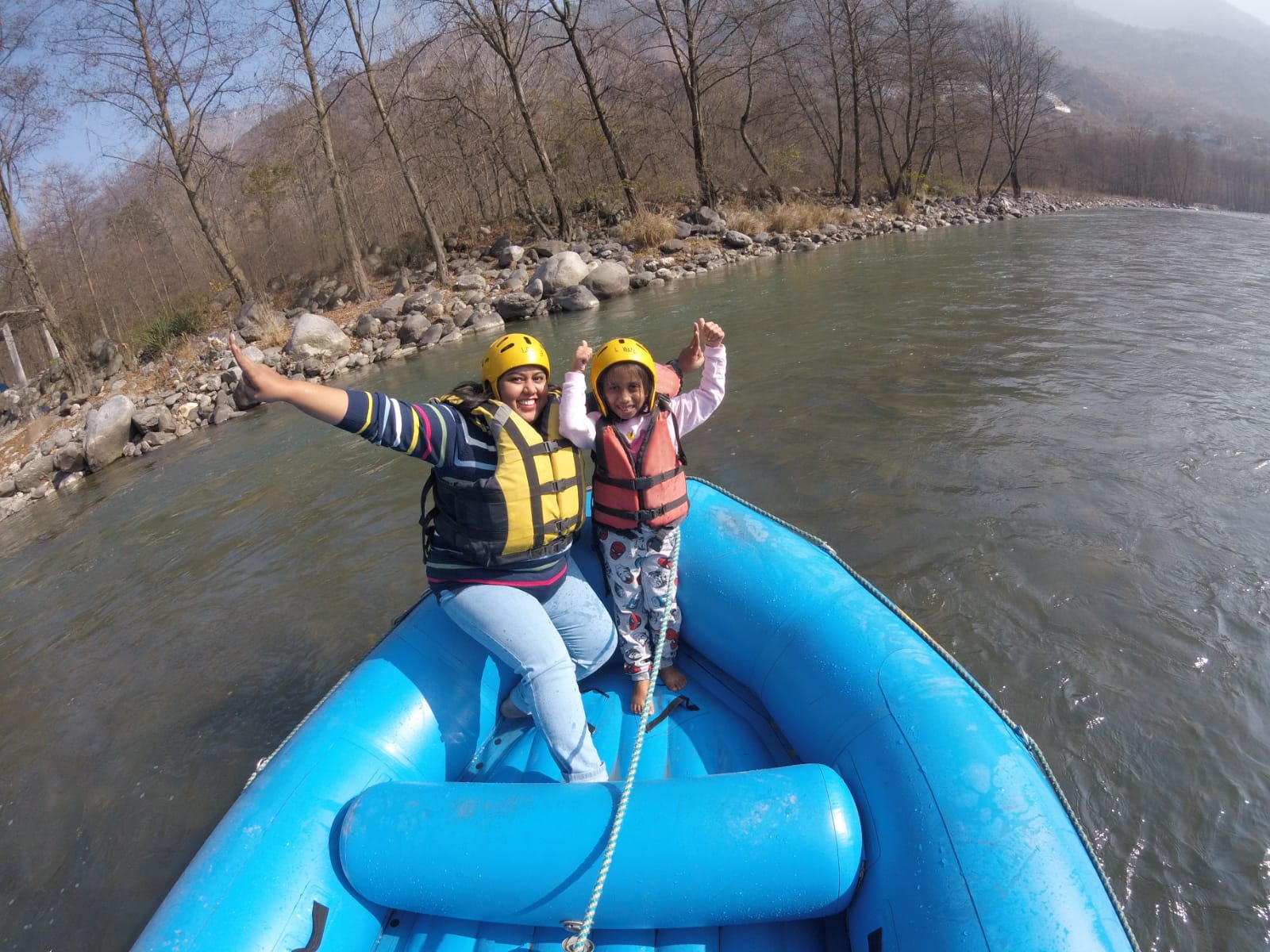 When it comes to kids, we tend to put all our concentration on their studies, right? We believe that their schooling is all the education they need, the only thing that will impact their future. While that is true to a great extent, it’s not the only important thing. Along with their studies, I believe kids should also be exposed to other experiences. It’s the only way there can be overall growth.

If all she wants to do is play, I just let her. As long as she is busy and engaged, it’s enough. I try to keep her from getting bored by cracking jokes and conversations. But sometimes, she will want to watch an animated movie or show. So, I allow her some screen time. Not more than 15 or 30 minutes. The trick when you’re travelling young kids is to know how to entertain themselves or have tools to help them entertain themselves.

I started travelling with her when she was 3. But because she is so young, I go above and beyond with the safety precautions. Nothing is spontaneous. I research and book everything well in advance. Even when it comes to food, I encourage her to try new things but first I ensure it’s not something that will upset her tummy. I carry A-Z medications just in case. From cough and cold to a range of probiotics, I leave nothing to chance. Even when we’re doing a road trip on a two-wheeler, I have this belt wrap around that I use to tie her to me. I also ensure to buy equipment for her. Snorkelling gear, for instance, because COVID has made it risky to use anyone else’s.

My husband is also incredibly supportive. But I don’t tell him what risky activities we are doing until we do it. At the end of the day, I will send him pictures of us and then tell him about the experience. He doesn’t get angry or annoyed but he always tells me to be safe. He knows he can’t give us as much time so he says we should experience new things together rather than just sitting at home. 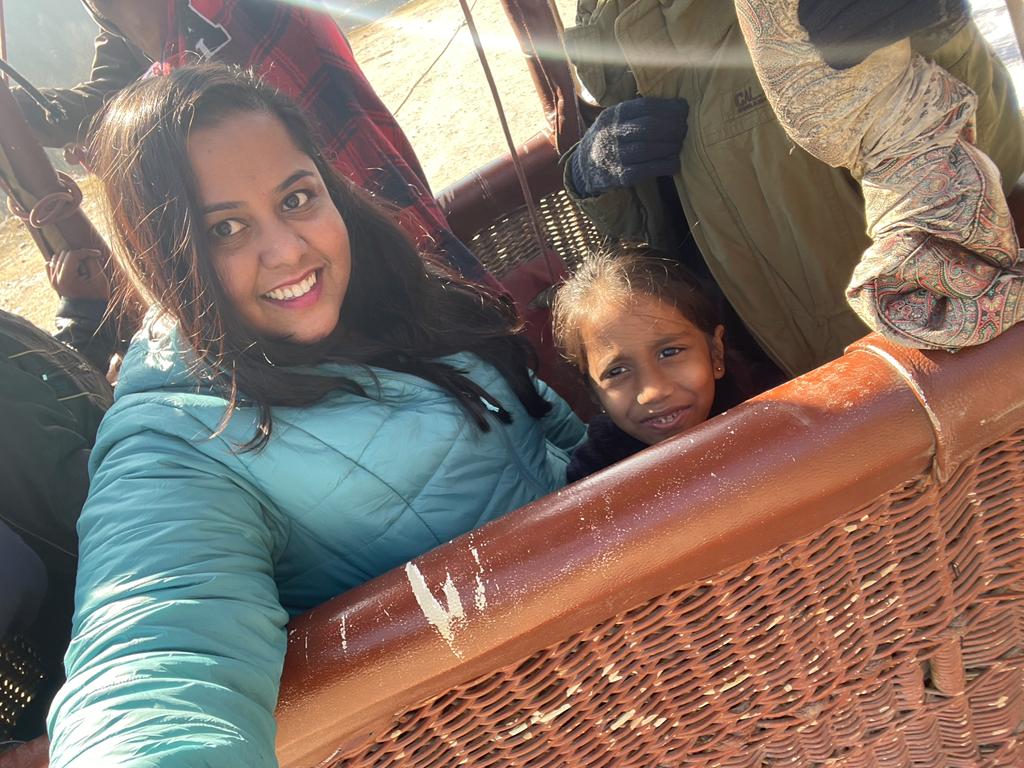 Next, I am planning to go to Europe. I want her to see a different part of the world. She also wants to experience touching and interacting with animals. So maybe a safari. I give her three options and ask her what she wants to do. Even when it comes to picking the place, she has a say in where we go. We both come to a decision together. It’s not just my call, I treat her as an equal participant and not just a child. I found a travel buddy in my 7-year-old daughter.

I would say one thing to all moms who are hesitant to travel with their kids and let them try new experiences. Do not think that the kids are not efficient enough to understand things at a young age. They are brilliant and they can perceive much more than us. But until you let them experience new things they will grow up to be scared. We have to let them face their fears and decide for themselves.