A year ago, he couldn't run 50 mts. This January, he completed the 10K marathon

Raising funds for kids with disabilities at the Mumbai Marathon 2023

For those of us who rarely manage to get in our 10,000 steps a day, anyone who ran the Tata Mumbai Marathon last weekend seems like some kind of superhuman (need fitness motivation tips?). The largest marathon event on the continent saw more than 50,000 participants return after a two-year hiatus due to the Covid pandemic. The break did nothing to slow down these dedicated runners from all around the world, many of whom only breasted the tape after a gruelling 42km.

But perhaps the most committed athlete of the  Mumbai Marathon 2023 hails from the event’s hometown. Mihaan Gandhi Dhall — an 18-year-old who has been training in Churchgate’s Oval Maidan since 2017 — completed the 10km leg of the run.

Mihaan has Down Syndrome: a genetic condition that comes with an extra chromosome. Children with Down Syndrome experience developmental delays and learning disabilities, with varying degrees of severity. Yet with the support of his parents and his school, he has managed to study until the 10th grade.

According to his mother, Moneisha, Mihaan was a chubby kid six years ago. “He couldn’t even run 50m without getting out of breath. So we felt he needed to get into some kind of fitness programme.” The challenge was to find a trainer who could understand his special needs while still presenting him the opportunities he craved.

That trainer was Rustom Warden. A music therapist at the Jai Vakeel Foundation for children with disabilities, Rustom was referred to Moneisha by a friend. “I didn’t think twice. I told Mihaan’s parents to send him and see if he enjoyed it and felt comfortable doing it. As far as the marathon goes, he decided to take it up as a challenge when he heard I had trained another differently abled friend,” says Rustom.

The plan was for Mihaan to work towards a 21km run over the course of a few years. But one year into his training, Rustom’s colleague suggested he do a 10km run to raise funds for Jai Vakeel. “I don’t think I ever thought about doing a marathon,” says Mihaan. “A 10k is a big step from barely doing one or two laps. But then I thought if I put in my hard work and determination and dedication, it will happen.”

Besides taking on the challenge for himself, Mihaan’s motivation was to help others. “I said yes because I thought it would be nice if I did something for kids who have disabilities like me.”

Rustom’s philosophy is that if you’re only doing it for yourself, you’re missing out on a large part of what the marathon is all about. He and Mihaan created a joint fundraiser for Jai Vakeel, hinging on the 10k run. From the start, Mihaan was laser-focused. “He is really disciplined, almost to the point that I was scared to ever cancel a session with him,” says Rustom.

They started slow and steady, doing laps to increase Mihaan’s stamina for the Mumbai Marathon 2023. By setting small, achievable goals, there was always a win pushing him forward. Used to working with kids, Rustom brought a sense of fun to the proceedings – playing silly games and loud music to make a training session feel like a party. He was careful, too, to strike a balance between challenging Mihaan and looking out for his health.

“I do have to pay more attention to their health and look out for warning signs of fatigue,” says Rustom. “But as far as I approached it, I made sure I didn’t make him feel different — because in my eyes he wasn’t.”

Determination is simply a part of Mihaan’s personality, whether on his first day of training as an unfit kid, or his marathon 10km (like this marathoner who started at age 42.)

When the big day finally dawned, Mihaan wasn’t well. He’d been suffering from stomach problems, in part due to nerves at the prospect of a race. “You know when he skips dessert, he’s really not well,” says Moneisha. Retching and green, he nevertheless went to the marathon. 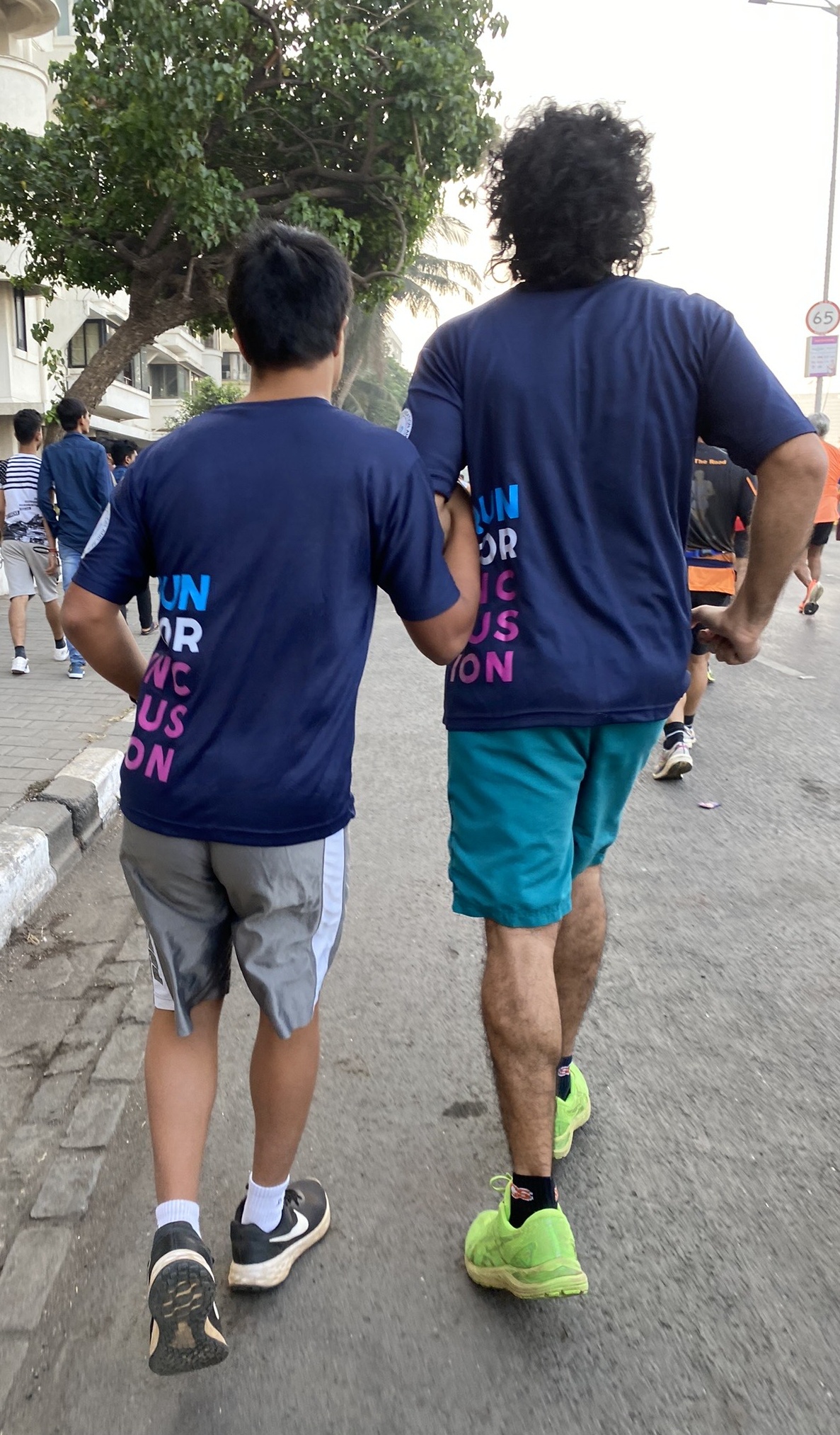 “I was very nervous, I’d only done 400m races at school,” recalls Mihaan. “But I thought, I have so many people supporting me, so I can’t just back out.” And he didn’t. Despite feeling ill throughout, Mihaan’s grit carried him to the finish line.

He has a motto he swears by: “If you really love something and if you believe in yourself, success will come.” Mihaan surpassed his goal of raising Rs 5 lakh in funds, and Rustom’s goal of Rs 50,000 was dwarfed by the sum he received — over Rs 1.5 lakh. Their joint fundraising endeavour has been a massive success for Jai Vakeel.

As for Mihaan’s own achievements, he doesn’t take himself too seriously. “Whoever thought that from me being so lazy, I decided to do a 10k? Everyone would be shocked,” he laughs. His parents, on the other hand, know what his win at the Mumbai Marathon 2023 means for them.

“When we first got his diagnosis, we didn’t know what to expect,” says Moneisha. “I’d love for other parents to know that it may not be the marathon, it may be something else, but your kid can reach places you’ve never imagined.”