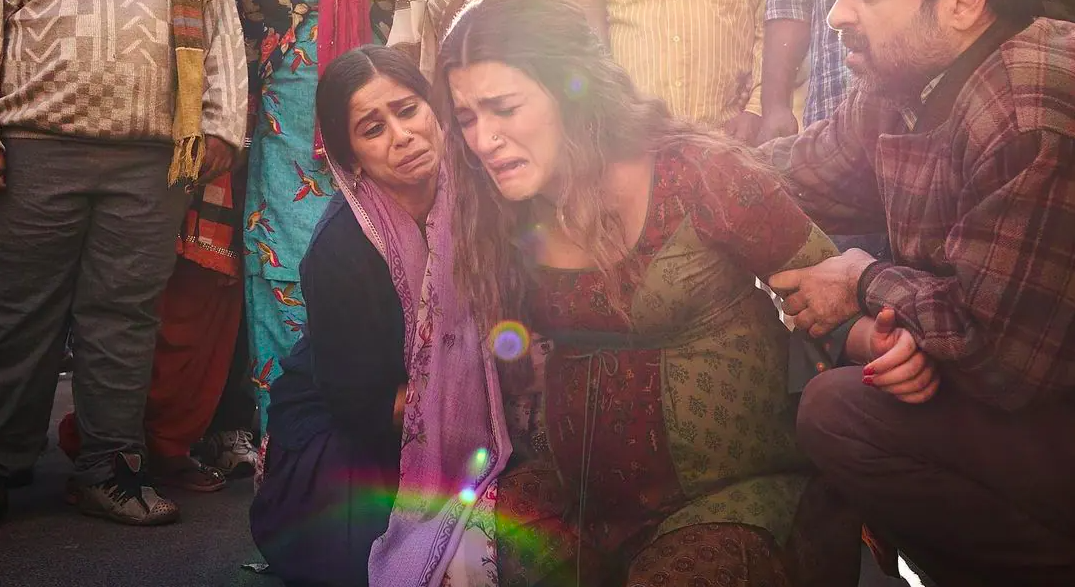 Hold on, can you really be pregnant and not know?

Yes, the woman who gave birth on the toilet had no idea she was pregnant

Sundar Pichai, Google CEO, starts his day like a typical desi dad. A newspaper, omelette and garam chai. Oprah’s is more our style; she starts with an early rise, followed by walking her dogs and lots of cuddles. A lot can be achieved in the early hours of the day. And sometimes when we feel a bit lost, it can be comforting, even helpful to look at how highly successful people start their day. But there is one thing that, no matter how many celebrity lists you read, will remain unspoken. The best part of any morning. May we say, the most important. Yes, yes, spending time with the kids is great, sure. But we’re talking about the sweet release of a good poop to start the day.

Now imagine that you feel a rumble in your jungle. You’re ready with your phone in hand to doomscroll through the news. A little push and you hear a plop. Except in Lucy Jones’ case, it wasn’t a bowel movement. She saw two tiny feet sticking out of her toilet. She had just given birth after having a cryptic pregnancy, also known as stealth or unknown pregnancy, according to Dr Jainesh of Motherhood Hospital, Navi Mumbai.

Jones said in an interview that she had no idea she was pregnant. There was barely a ‘baby bump’ to take notice of. She was taking birth control pills, and as a flight attendant, had also passed a “fit to fly” exam a few weeks before, taking two pregnancy tests that gave negative results. She had experienced minor back and stomach pains the night before going into labour but paid it no mind as it was a brief passing pain. Little did she expect that her plans of “pushing out a poo” would end in motherhood. Though, it is how many women have described the feeling of childbirth.

“A cryptic pregnancy is unheard of to people unless they experience it themselves,” says Gurugram-based Dr Priyali Bakshi. Experts say cases of cryptic pregnancy are few and far between, but the most commonly attributed research shows the chances of occurrence are 1 in 475 pregnancies, says Bakshi. “Put that in perspective, given the popularity of just our country. It’s not rare then, after all. For both, people who want to get pregnant and people who don’t, it’s essential to be aware.”

Can you really be pregnant and not know?

Estimates suggest that one in every 2,500 women doesn’t know they’re pregnant until they go into labour. You’ve probably come across cases like Jones’ and thought to yourself, how could they not have known?

A cryptic pregnancy doesn’t necessarily come with the usual symptoms, or at least not to the degree we expect.

“One may notice signs like fatigue and nausea, which can easily be managed. So, it will be tough for a woman to know whether she is pregnant or not,” adds Jainesh.

At first, it may seem like a cryptic pregnancy isn’t so bad. If morning sickness, moodiness and breast tenderness (it’s not only pregnancy-related) are subdued, then it can’t be so grim, right? While the symptoms may go unnoticed if someone is unaware that they are pregnant, it also means that they don’t make the necessary lifestyle adjustments or nutritional changes.

For example, someone who is trying to pregnant may continue with a very intensive workout routine, suffer from nutritional deficiencies, have cocktail nights out with friends and dance the night away. “Prenatal care is important to ensure a healthy journey for both mother and baby.”

On the other side of the aisle, someone who doesn’t want to get pregnant has a limited period when they can legally seek an abortion. Speaking to Leeza Mangaldas about abortion, gynaecologist Dr Nozer Sheriar (who laid down some hard facts) said that abortion is legal in India for married and unmarried women. Up to 20 weeks, to obtain an abortion, the law requires that women have the authorisation of at least one medical expert. Between 20 and 24 weeks, women need the authorisation of two doctors.

But given that cryptic pregnancies can go overlooked beyond 20 weeks, it is risky for people for whom parenting is not on the cards right now, or at all.

What causes a cryptic pregnancy?

A hormonal imbalance due to natural and external factors is the primary link, experts say. There are certain lifestyle choices, health conditions and behaviours that may allow the pregnancy to go unnoticed too.

Different studies in India on polycystic ovary syndrome (PCOS or PCOD) have reported its prevalence in 3.7% to 22.5% of women, even up to 36% in adolescents. Others say 1 in 5 Indian women can be diagnosed with PCOS (every woman’s experience is different).

“PCOS is a metabolic condition that affects approximately 20% of all Indian women of reproductive age,” says Dr Vishakha Shivdasani, a medical doctor, author and nutritionist. PCOS affects a woman’s endocrine system and is characterised by symptoms such as infrequent or prolonged menstrual periods, excess hair growth, acne, and obesity. “Though we are not completely sure of what causes PCOS, we do know that it is linked to one’s lifestyle,” explains Shivdasani.

When your periods are already irregular, a missed period here or there isn’t a matter of major concern.

A sudden change or restrictions in your diet can cause amenorrhea, an absence of your period for three months or more. While the lack of period may be a sign of pregnancy itself, it’s the havoc wreaked on your sex hormones, oestrogen and testosterone, that can lead to a symptomless pregnancy.

If your weight is constantly fluctuating – whether because of diets or medications – then the weight gain, well, would be seen as just that, rather than being related to pregnancy.

Who isn’t stressed these days? But fleeting temporary stress isn’t the same as chronic stress, sustained over a long period. The stress hormone cortisol acts like a striker on a carrom board, knocking around our other hormones, including the ones that control the menstrual cycle.

With our cycle thrown out of whack, an irregular period becomes part of a stressful life. It leads to a hormonal imbalance and can disrupt common pregnancy symptoms, according to Jainesh.

A false negative on a home test

At-home pregnancy tests are extremely convenient but there is a chance to get a false negative on the test. Bakshi says that a false negative is likely if a test is taken too soon after a missed period. “If you still feel that something is off, then wait and take another test one week later. Taking the test in the morning is also recommended as you get a more accurate reading with a concentrate of urine.”

If you’re early into the pregnancy, it’s also possible that the hormones haven’t elevated to a point that they’re picked up by a home test.

Infertility or thinking you can’t get pregnant

If someone thinks that pregnancy isn’t a possibility for them, they might not recognise the symptoms.

Similarly, new moms who are breastfeeding or recently gave birth might dismiss pregnancy symptoms, thinking ovulation hasn’t returned yet or that the symptoms are a part of the post-childbirth experience. They may chalk up their symptoms to something else entirely. Fatigue could be mistaken for not getting any sleep while your infant screams all night, or being under too much stress. Acidity and gas? Probably ate something iffy yesterday.

The extremes of the age spectrum

Bakshi says that people experiencing both early puberty and perimenopause feel that it is unlikely that they will get pregnant and don’t pay heed to symptoms. “At these extremes of the age spectrum, your periods aren’t regular, so it’s easy to attribute a missed period to age.”

The related symptoms of pregnancy such as acne, weight gain, and moodiness also overlap and can be mistaken for puberty and perimenopause.

There is a certain psychological aspect to a cryptic pregnancy as well. For a few, it is a mental health condition called “denial of pregnancy” where Bakshi says people genuinely don’t believe they are pregnant even though all signs indicate a positive result.

People living with mental illnesses like clinical depression and anxiety disorders are also accustomed to certain physical symptoms such as fatigue, changes in mood, sleep patterns and brain fog. A pregnancy can then go undetected well into the late-second trimester.

What are the other signs of pregnancy to look out for?

Pregnancy symptoms are as varied as people’s preferences when it comes to toppings on Maggi. Not just that, but the same person’s symptoms can be drastically different each time. Some cryptic pregnancy symptoms coincide with that of a typical pregnancy, such as nausea, tiredness, back pain, heightened sense of smell, heartburn and migraine, but the intensity or degrees of it may be less.

If someone isn’t planning or expecting a pregnancy, a lot of symptoms can be dismissed. It’s easy to justify some of them, for example, weight gain is common during pregnancy but the size of a baby bump can depend on a person’s body composition as well as the position of the foetus in the uterus.

There are some lesser-discussed symptoms that people don’t pay heed to, according to Bakshi. The main one is that even during pregnancy, you can experience spotting like you would when your period begins.

It may be implantation bleeding, with light spotting when the embryo burrows into the uterine wall. Spotting could be caused by infection, by something called a subchorionic hematoma with blood gathering between the placenta and the wall of your uterus. It can also be due to friction during sex which causes blood vessels close to the surface of the cervix to burst. The spotting is usually light pink or a darker brown colour.

Bakshi adds, “Frequent nose bleeds occur due to the increase in blood circulation during pregnancy. The nose blood vessels are prone to rupture. The increased blood pressure also makes you overheat. You perspire more, which could feel like a hot flash. There can be swelling in the hands and feet without any injury, and alterations in vaginal discharge. Hormonal changes can also cause you to have very vivid dreams. These are all symptoms that most people who have experienced pregnancy before are likely to pick up on.”

When should you speak to a doctor?

Bakshi says to start with tracking your period and if you’re avoiding conception, use more than one form of birth control (like oral birth control pills combined with condoms). When missing a period, assess the stressors in your life. What is your diet and exercise routine like? Is there something irregular?

“You need to be in tune with your body. Your body will always tell you when something is off. You may think you’re being ‘hyper’ by calling a doctor because you missed a period, but isn’t it better to know the reason, be it a stealth pregnancy or hormonal issue?” asks Bakshi.

An external ultrasound may miss a pregnancy if the embryo doesn’t implant where it normally would or the shape of the uterus obscures the appearance of the embryo. It’s better to get more than one test done to confirm a pregnancy. Jainesh relies on a serum hCG test that alerts him about a pregnancy. There are external as well as internal ultrasounds that you can advocate for if you feel the doctor is not taking your questions seriously.

Pregnancies come in many shapes and forms. The more we talk about the realities of pregnancy, the better we are equipped to pick a path for ourselves and our health.