When the ceiling is leaking and so is your brain

Broken buckets and bheja fry, my life in a spuddle

On a sickeningly humid morning, the sort where your hair frizzes into a Brillo pad, I was working on my book when I recalled that I needed to sort out my mother-in-law’s medication. This was also the exact moment my daughter brought out her guitar and decided to play ‘Señorita’ for the 23rd time that morning.

I messaged the doctor, “Doc, which medicines are we going to continue after 2 weeks? I will buy enough stock since she is travelling.”

She texted back, “You want me to give you a list of medicines?” When I replied in the affirmative, she sent me another message, “Oh, like for cuts and coughs, minor stuff?” Puzzled, I wrote back, “No, just the medicines for her acidity.”

Was I using the wrong term, I wondered, before typing back, “Sorry, I meant her gastroesophageal reflux issues.” I received a message, “I am confused. Please call.”

Speculating whether the poor doctor was overworked and having some sort of a breakdown, I tried calling her. It was only when I got through that I realised, instead of messaging my mother-in-law’s gastroenterologist, I had been messaging my dentist.

This was just further evidence that I have been in a bit of a ‘spuddle’ for almost a year. An archaic word I stumbled across, that accurately describes my current predicament. The dictionary defines it as, ‘To work feebly and ineffectively, because your mind is elsewhere.’

For someone who once started working at 7 am each day and, by noon, had almost finished an entire day’s work, the last year has seen me walking around till dusk in my pyjamas with one unchecked to-do list after another. Reassuringly, I am merely a statistic.

The scientific journal Plos One recently published a study centred around the challenges of working from home. About 47% of those surveyed stated that working from home was less efficient. Throw children into the mix and the numbers dipped further with 71% of single parents and 57% of partnered parents complaining about working less productively.

There used to be a distinct demarcation of both space and time before this virus outbreak. If, let’s say, the ceiling in my living room started leaking, someone would put down plastic sheets, and a large pot under it, and wait for me to get home to sort it out.

Now, I am right there watching it leak, my brain going into some sort of bheja fry mode as it tries to figure out what it should prioritise.

Should I focus on prepping for my Zoom meeting or examine the leaking ceiling more closely? Do I then get back to working or venture up to my neighbour’s flat to see where this water is coming from? Should I call a waterproofing agency at this very moment or after the meeting?

My domestic staff, on the other hand, also assume that they can interrupt me at any point in the day.

A few weeks ago, ignoring the fact that I was clearly banging my fingers against a keyboard and not twiddling my thumbs, my Man Friday started looming around my desk.

“Please don’t disturb me unless it’s urgent,” I said.

“It is, Didi,” he nodded. “The bucket handle has broken, can you place order for new one from online.”

I tried talking to my partner. “Listen, I keep worrying about domestic things when I am working, and about work when I am with the kids. I am never at peace!”

He frowned in the middle of chomping on his poha as I elaborated, “Remember the time you asked your assistant to turn the lights on and then a moment later, to switch the fan off? The two switches were on opposite walls and she was so confused about which task to do first that she started shuffling from left to right, almost like a dance. I seem to be doing that all day.”

He put his hand on my shoulder, “Your mind is everything. Wield it carefully or it will command you.” Touched by his thoughtful advice, I gave him a tight hug. It was only later when I told my son about his father’s wise words that I discovered the truth.

“Mom, that’s a dialogue from Kung Fu Panda,” he sniggered.

Fed up with spuddling, I turned to friends and finally to Google Bhai Saab in order to come up with a few strategies that seem to do the trick.

1. The Pomodoro Technique
You pick a task. Set a 25-minute timer. Work without distractions till the alarm rings. Take a 5-minute break, then go back to working for 25 minutes. Complete 4 such sessions, then take a long break. This technique is the equivalent of tying a black thread around your wrist. A spell of protection over a precious commodity — your time.

2. Worming your way in
A little extreme for some, but turning into an early worm and waking up before the rest of the household could give you a colossal head start. You could try making up for some lost sleep with a late afternoon nap when productivity also tends to snooze away.

3. Block your inner Bua
It’s easy to beat yourself up when you are not working at optimum levels. We all have this nasty bua who lives inside our heads and periodically yells out, “You are not good enough.” “You are just lazy.” “You are wasting time.” When that voice starts screeching, do what you would with an online troll. Block and move on.

4. Tick-Tock
Fix specific hours for work and for domestic chores. Keep a little time to unwind even if it means reading a book while sipping on a virgin mojito, or one that has really been around the block. 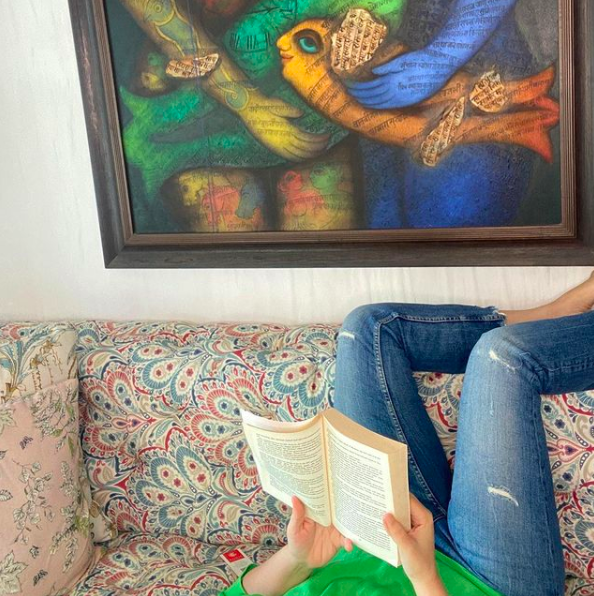 5. Consult an animated guru.
Kung Fu Panda is not the only animated wise guru around. If you can’t get hold of a therapist, fall back on buoyant Dory and her perennially practical advice. This works for almost every situation. You discover a colony of cockroaches in your lingerie drawer. Three members in your family have violent diarrhoea. You meet an anti-vaxxer who chokes on a piece of popcorn and coughs on you so violently that you find a small, chewed-up bit in your hair the next day.

Try Dory’s mantra. Repeat ‘just keep swimming, just keep swimming’ a few times and instead of drowning in your sorrows, you may just manage to breaststroke your way across myriad spuddle puddles.