The kids (and their books) are alright

We hate to break it to you, but you’re not a certified parent until your toddler rejects you repeatedly, and refuses the well-curated choices you make for them. From spitting out the special homemade birthday kheer, and throwing the clothes you buy for them off the balcony, they are quite clear about what they really want. Even more than adults, sometimes.

Most experts will recommend that you let them make their choices, T&C applied. Give them khichdi and lauki sabzi and let them choose. They’ll be more considerate towards your efforts. The same goes with the books you pick for your mini bookworms.

As parents, if you still harbour doubts about letting your kids make their own choices at the bookstore or library, well, try and remember those assigned reading hours, err.. library period. Week after week, librarian aka Groucho Max assigned you a book of her choice. Sure, there was a slew of Nancy Drew, Famous 5 and Jataka Tales. But all you eyed was the copy of Tinkle your bench partner received ever so often. And before you knew it, reading hour became a chore that you’d fake a stomach ache to skip.

Publishers and psychologists the world over believe that in order to make your child’s reading hour a happy one, you need to let them decide what they want to devour.

Kyle Good, a spokeswoman for Scholastic Corp, children’s book publisher, said in a previous interview, “Choice is key. When you let kids choose the books they want to read, they’ll be voracious readers.”

In fact, Donalyn Miller and Colby Sharp’s book, Game Changer!: Book Access for All Kids, elaborates on the benefits. “They include a growing sense of confidence, ownership and autonomy as both readers and learners. With more choice in books comes an increase in the amount of reading students actually do. As with any skill, the more students read, the better they are at it, leading to improved reading ability and greater achievement in other content areas,” reads an excerpt from the book.

After picking the brains of the young ones last month, we found a tiny brigade of readers (aged 2.5 – 6) who unveiled their favourites. And of course, there’s a book on boogers and poop too.

This reading list for children is handpicked by kids themselves 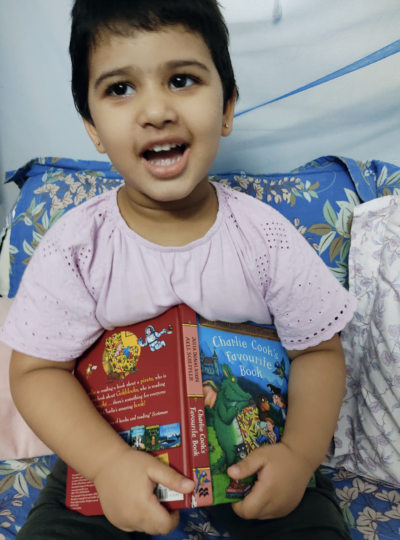 Kids who read and enjoy this interesting book by Julia Donaldson are likely to grow up to be Christopher Nolan fans. Charlie Cook’s Favourite Book is basically Inception for kids.

In the book, little boy Charlie Cook curls up in a chair with his favourite book of the day, titled ‘Shiver Me Timbers: The Story of an Old Sea Dog’. In that story, the old sea dog finds a book in a treasure chest and reads the story. A girl called Goldilocks in the sea dog’s book, in turn, is reading Fairy Tales from a Forgotten Island, and so on. At the end of this innovative cycle of stories, there’s a boy in an armchair reading his favourite book, and yes, you guessed it right, the boy is the eponymous protagonist, Charlie Cook.

Two-and-a-half year-old Myra Chakrabarti loves the selection of stories in the book, and won’t go to bed without her mom reading them to her every night. “She’s been obsessed with the book for a year. Despite having a collection of more than 40 books, her day has to end with Charlie Cook. I guess it’s the variety of eye-catching illustrations, relatable characters and the rhythmic lines that enthral her,” says her mother. 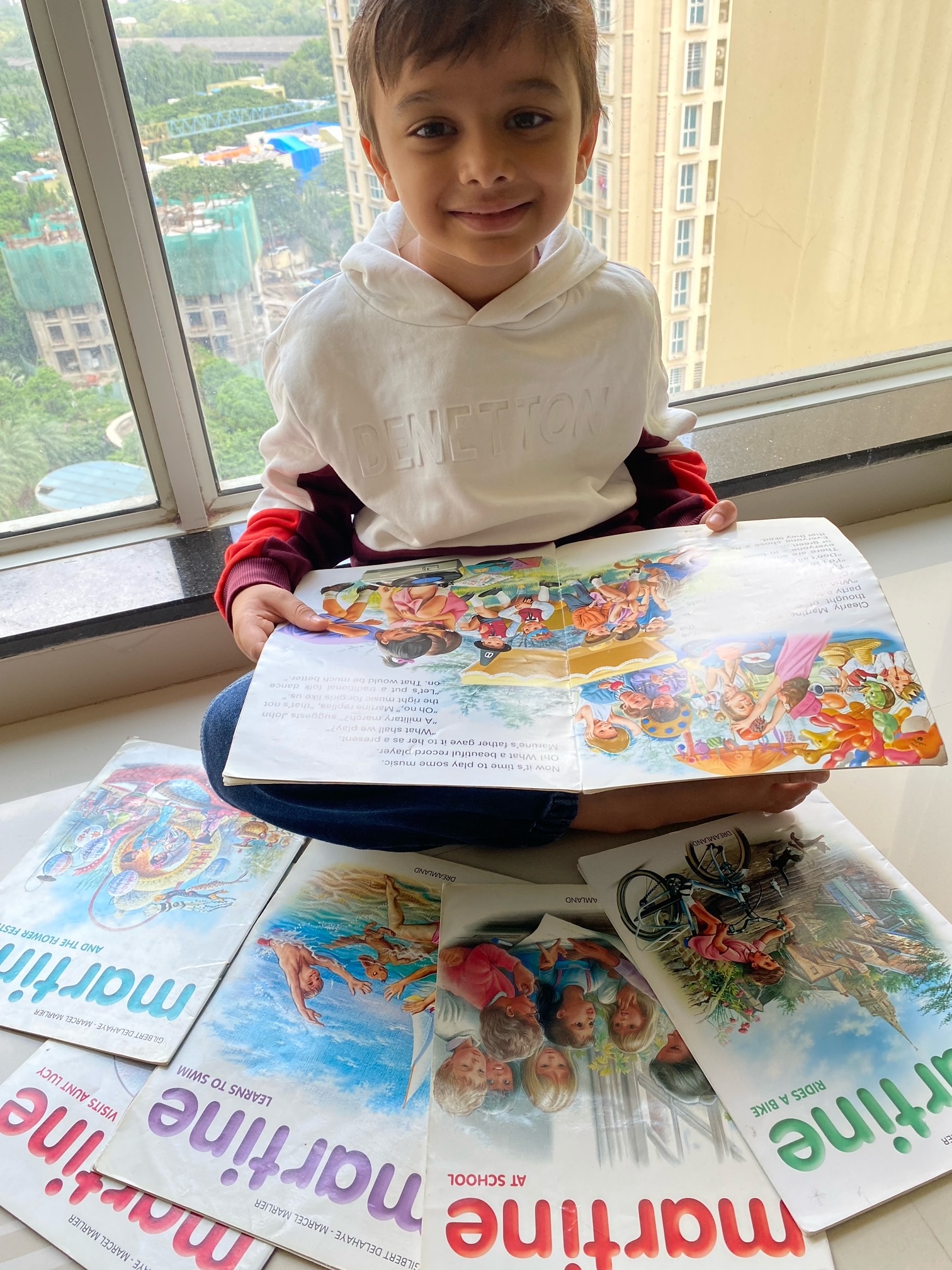 The Martine series can be the perfect boxset to talk to your kids about “Why should boys have all the fun?”

Delahaye’s series, originally published in French, has been translated into several languages, and tells the stories of a wise girl called Martine as she takes on various adventures, from how she learns to row a boat, to her first time at the zoo and more.

“Martine is so clever and smart. I want to be like her too,” says five-year-old Zehaan Satra. 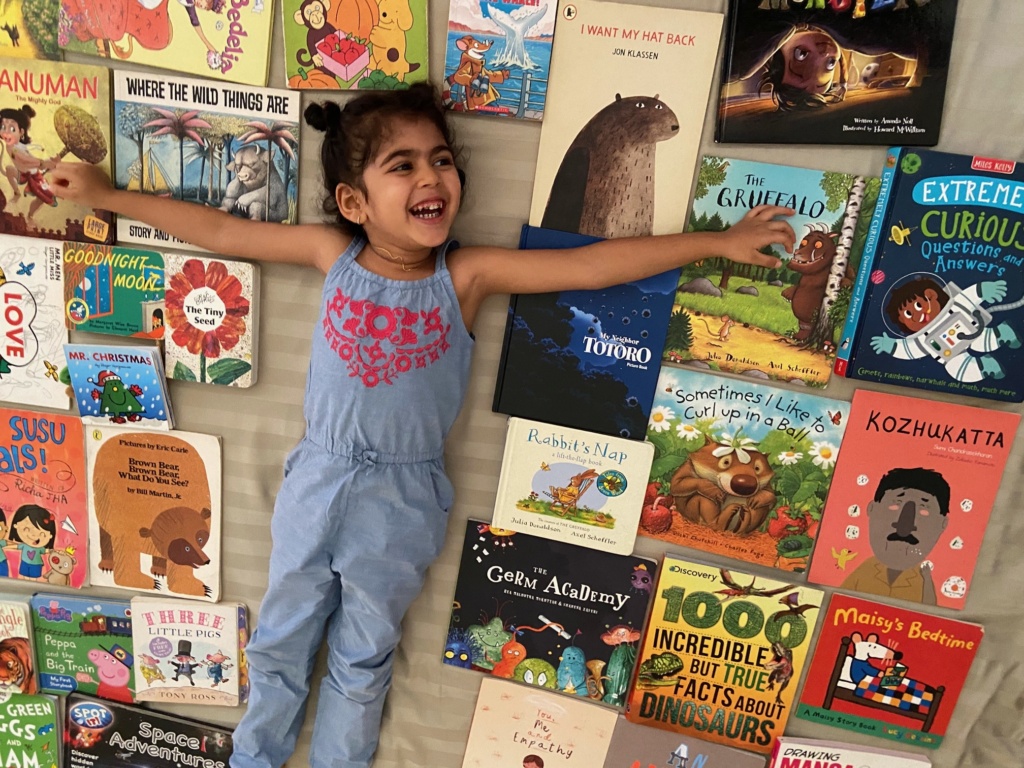 The Susu Pals by Alicia Souza and Richa Jha

Four-year-old Nyra Thakkar loves the vividly illustrated The Susu Pals by Alicia Souza and Richa Jha. The board book follows the journey of two girls Rhea and Dia, how they meet, and become best friends.

They call themselves the “I-braid-your-hair-you-braid-mine pals, let us-match-our-underpants pals, the just-us-forever-and-ever pals”. And then there’s a plot twist when Isha, a new girl moves into their neighbourhood. Will the two existing BFFs add Isha to their group or will there be jealousy?

The Susu Pals (or the wee wee pals) is a crazy emotional ride of friendship for little ones and we are sure, even adults will connect to some aspects of the book. 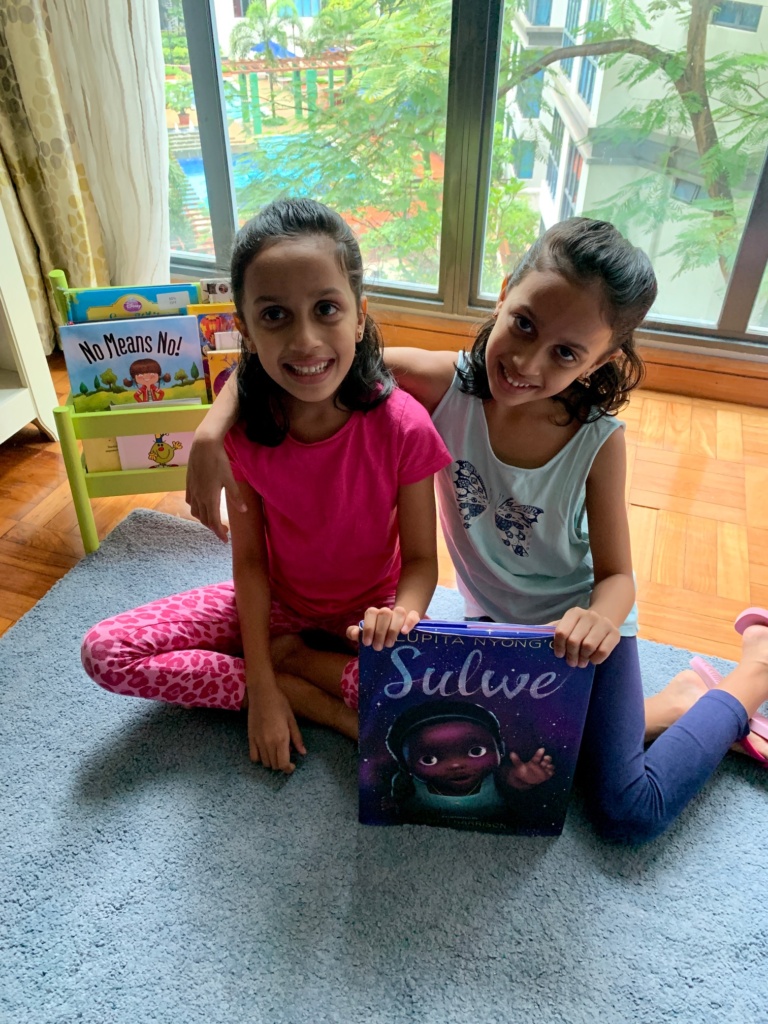 Oscar winning-actor Lupita Nyong’o’s book for kids could very well be the foundation course in self-love and empowerment for young ones.

Sulwe’s dark skin alienates her from the rest of her family, who have lighter tones, including her sister. Sulwe hopes that someday she will wake up with lighter skin and nobody at school will tease her anymore. But when her mother narrates the story of daylight and the darkness of the night, and how we need both, Sulwe learns to love herself.

Six-year-old twins Anvitha Bhat and Navitha Bhat, fans of the title, love the book because of the way the colours are described with the time of the day and how it teaches them that every girl is pretty in her own way. 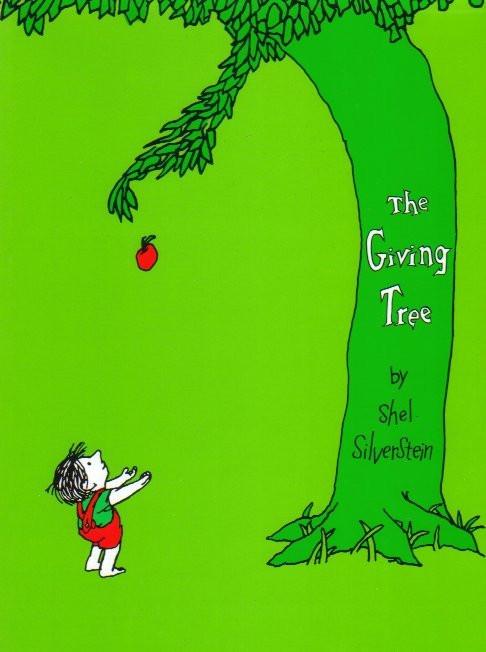 The Giving Tree by Shel Silverstein

This children’s picture book, published in 1964, follows the lives of an apple tree and a boy, and the relationship they forge together. The tree, as the name suggests, is very “giving” and the boy grows up to be a “taking” teenager, a middle-aged man, and finally, a wrinkled old man.

The boy enjoys playing with the tree, but as he grows older, he stops spending time with the apple tree, he stops by only when he needs some material items. And the tree gives him parts of herself, which he can transform into material items, such as money (from her apples), a house (from her branches), and a boat (from her trunk).

“The tree gives everything to the boy, I want a tree like that too,” says Evaan, 4.

There’s a lot of teachable moments for parents in this Silverstein title. Read it with your kid, and share the joy of giving. 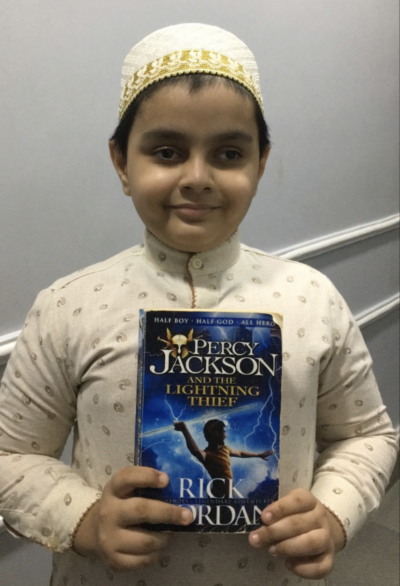 Percy Jackson & the Olympians: The Lightning Thief by Rick Riordan

Percy Jackson is every kid’s alter ego, in that, he can’t seem to focus or pay any attention to his schoolwork. His temper is always on flight mode, zipping from one extreme to another.

At boarding school, when he finds a hard time adjusting, his mom decides to tell him the truth of his life, and sends him to Camp Half Blood, a summer camp for demigods, where he learns that he is the son of Poseidon, God of the Sea. The book then follows his adventures as he and his other demigod friends try to prevent a catastrophe from destroying the world.

“I like Percy Jackson because it’s about heroes and he is the son of Poseidon and he can heal whenever he touches water,” says Burhanuddin Amin, 8. 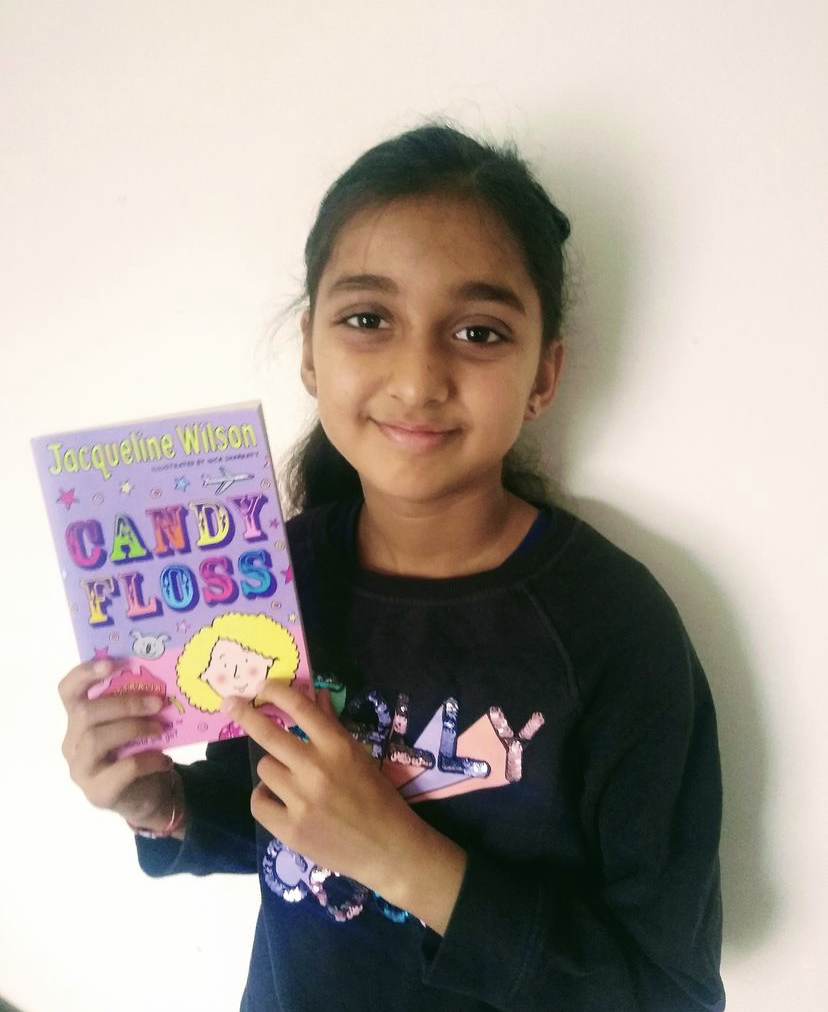 “Who do you love more? Mummy or Papa?” This is what aunties ask kids until children become adults and then aunties switch to, “Shaadi kab karoge?”

Jacqueline Wilson’s book for kids actually makes her protagonist Flora take a tough decision at a very tender age. Flora’s parents are divorced, and she spends her weekdays with her mother, and meets her father on the weekends. When a drastic event forces her to choose between the two, who will Flora go with? It’s a sweet yet insightful book to start difficult conversations with your kids.

“I am a fan of Jaqueline Wilson. My mother and I first read The Butterfly Club together, and now Candyfloss is the current favourite. She makes difficult decisions look simple,” says seven-year-old Sia. 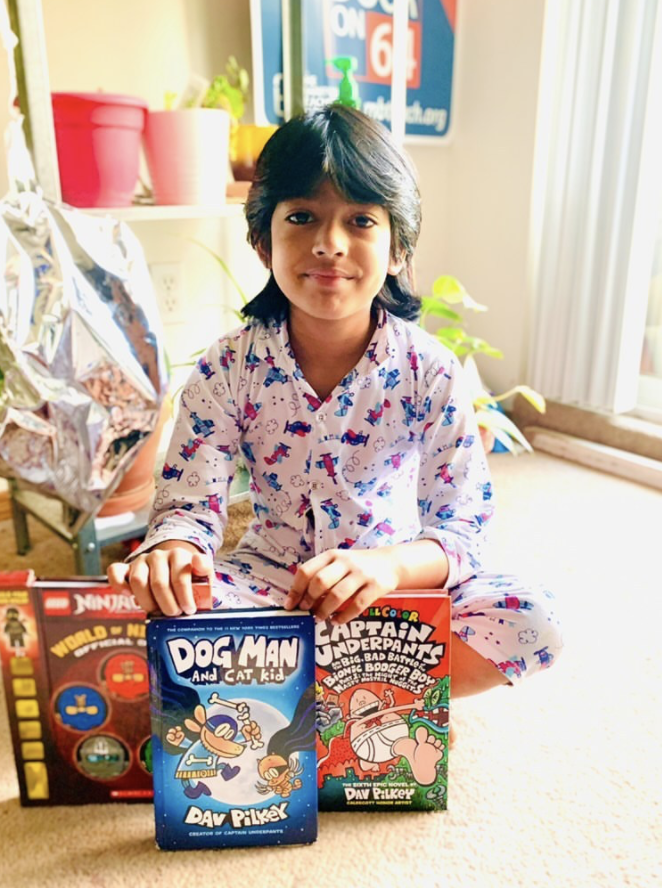 Kids are fascinated by poop, booger and all sorts of bodily excrements and in this pick on our reading list for children, Pilkey creates talking toilets, bionic boogers and other crazy (read: gross) adventures with the superhero in white briefs – Captain Underpants.

Two boys George and Harold encounter hilarious turns of events, almost on a daily basis. And their favourite captain always comes to their rescue. Build your kid’s appetite for toilet humour with this treasure trove of ‘potty’ adventures.

“There are so many cartoons and it’s easy to read. I love Captain Underpants because it’s really funny,” says Daksh Bhardwaj. 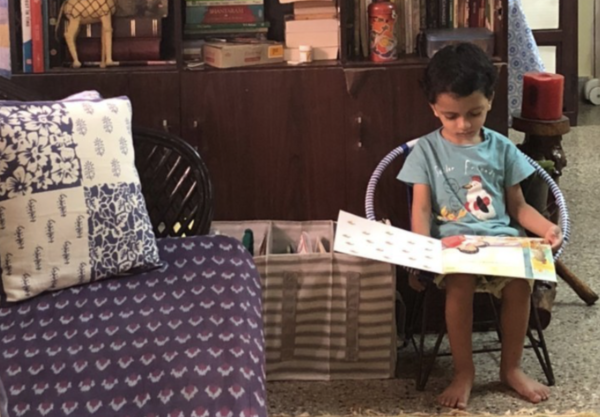 Uma Versus Upma by Meera Ganapathy

Feeding your toddler is an adventure sport. Often, they’ll reduce the dining table to a crime scene once the meal is over. Meera Ganapathy taps into this psyche of playing with food, and cooks up a memorable story.

Young girl Uma loves to play with her breakfast, and never finishes it. She finds clever ways to make her food disappear. Dosa becomes a napkin, vadas are fed to the neighbourhood cat and so on.

Until Uma’s Amma hatches a plan and designs a menu that Uma can’t resist. Upma has a crucial role to play in this meal-time adventure and Uma learns a lesson in not wasting food.

There’s a lesson in here for both toddlers, and their parents, but we’ll let you discover it.

“Uma plays with food, it’s not a good habit, but after eating upma, she stops it. I enjoyed reading it,” says Abhram, 5.