I swapped meat for plant-based kebabs and burgers for a week, and I was pleasantly surprised

There’s a new place for tempeh in my fridge, and in my heart

The range of Indian dietary restrictions has a tendency to expand like the universe, or an egg cracked into a pan. There are some vegetarians who wolf down eggs; some who afford themselves a bite on Wednesdays; those who’d eat the same egg only if it were baked into a cake; and those who would jettison the pan, egg and all, out of the kitchen window.

And so the humble egg bears the weight of our dietary whims on its fragile shell. The food choices we make are rarely based in any kind of consistent logic — cultural mores and taboos play as great a role in defining our palates as our likes and dislikes. But we’re increasingly being forced to confront the reasons why we eat the way we do, with industrial food systems becoming a major factor in environmental degradation.

It gives a whole new meaning to the idea of a guilt-free diet. Now, I’m worrying less about the impact of that chocolate bar on my belly, and more about whether it’s fair-trade organic. If eating a plant-based diet — or at least, getting closer to one — could make a difference, it’s a solid reason for many omnivores like me to examine their food choices. Especially now that we live in a world where straws can be made out of paper to save the planet, and meat can apparently be made out of vegetables (here’s how to eat more seasonal veggies).

Although I consume all creatures great and small, I happily cook meals without any meat. Since I’m lactose intolerant, I’ve experimented with dairy-free alternatives to milk and ice cream. Luckily, vegan products have come a long way since the early days when tofu was the only option. It’s the right time to expand on the plant-based diet options in my repertoire with so many new players in the market.

But that doesn’t mean any vegan product can walk in off the street and find a home on my plate. I’ve broken down a few judging parameters to picking a vegan alternative to my favourite omnivore meals.

The big one, of course, is taste. A vegan option doesn’t need to taste anything like meat. But it has to taste as good as the non-vegan version. The prospect of resignedly pulling out a box of soy cutlets from the freezer for dinner, telling yourself the planet will thank you even if your family won’t, is demoralising. And when I’m demoralised, I order a pepperoni pizza, so…

As someone who cooks her own meals, practicality is another important factor. Spending hours curing a watermelon so it resembles tuna fish might be an impressive feat, but it’s not a project I’m willing to participate in. The goal is to get a tasty dinner on the table, not win a Michelin star. To that end, the products shouldn’t be prohibitively expensive or difficult to prepare.

The final factor in determining the success of the vegan transformation is nutrition. Trading in mutton for matar might be delicious, but chances are the remix doesn’t contain the same nutritional benefits as the original. Meat is an excellent source of protein and essential nutrients. Plenty of vegans stay on top of their health by supplementing protein, as well as micronutrients like iron and B12. Since I don’t plan to do that, the vegan meal alternatives would have to be reasonably balanced (check out these three healthy recipes for your favourite foods). 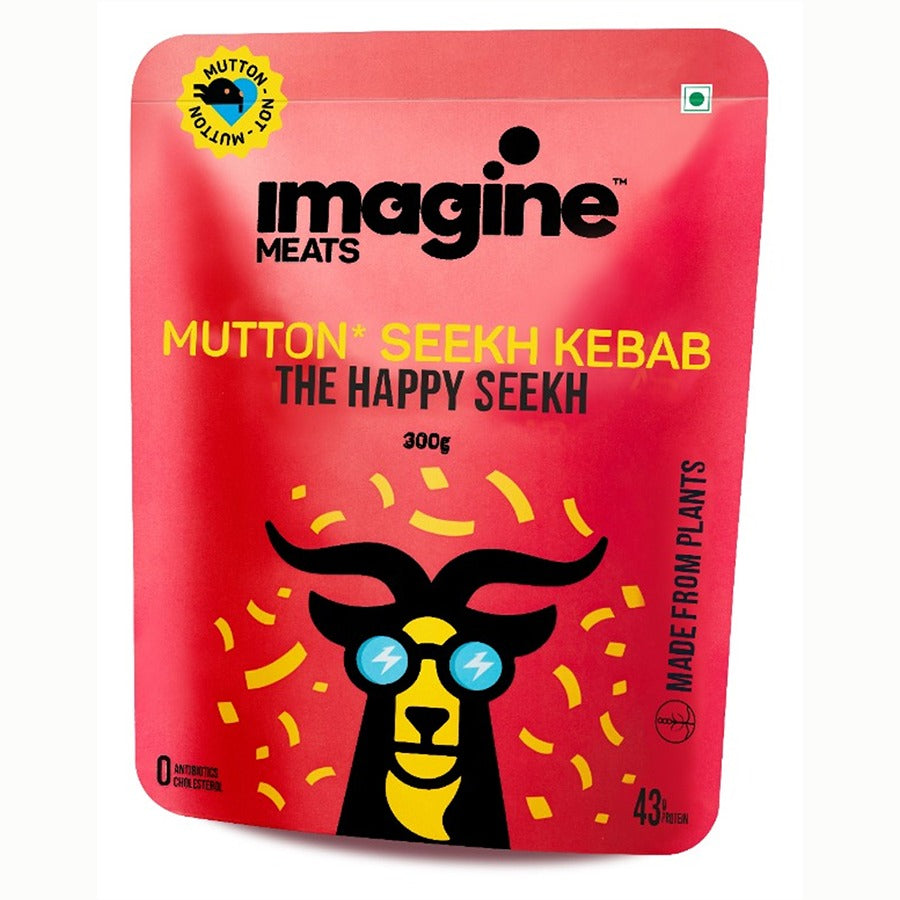 It’s hard to mess up the crowd-pleasing mutton seekh kebab. Serve with rice and salad, and you’ve got a light meal; roll up in a chapati with a sprinkle of chaat masala and chutneys for a forever-favourite tiffin lunch. I was hoping Imagine’s version would capture this versatility. Along with the brand’s other soy-based products, these kebabs are available in all 5 major metros, Hyderabad, Pune, and Mysore.

The first thing that hit me was the smell when I opened the bag: powerful and artificial, almost rubbery. Loath to judge a kebab by its cover, I fried a few up in a pan. Ten minutes, and the kebabs were brown on all sides, an easy and convenient pre-dinner snack. They’re rich in protein, although a little high in sodium and saturated fat (Is all fat bad? We’re busting nutrition myths).

Once cooked, they looked appealing — crispy, brown, and extremely lifelike. Diving in sans toppings, the meaty texture was satisfying, but the flavour was unpalatable — not salty like most processed products, but unmistakably chemical, with no hint of umami savouriness. When we loaded them up with onions and homemade green chutney the flavour improved considerably, mostly because it was masked.

In a roll with condiments or a gravy, these kebabs might be work for those looking for easy options to enhance a plant-based diet. What I want from a seekh kebab, however, is unadulterated joy, and these didn’t deliver. They were quite filling, and one pack is enough to feed four people for a meal. 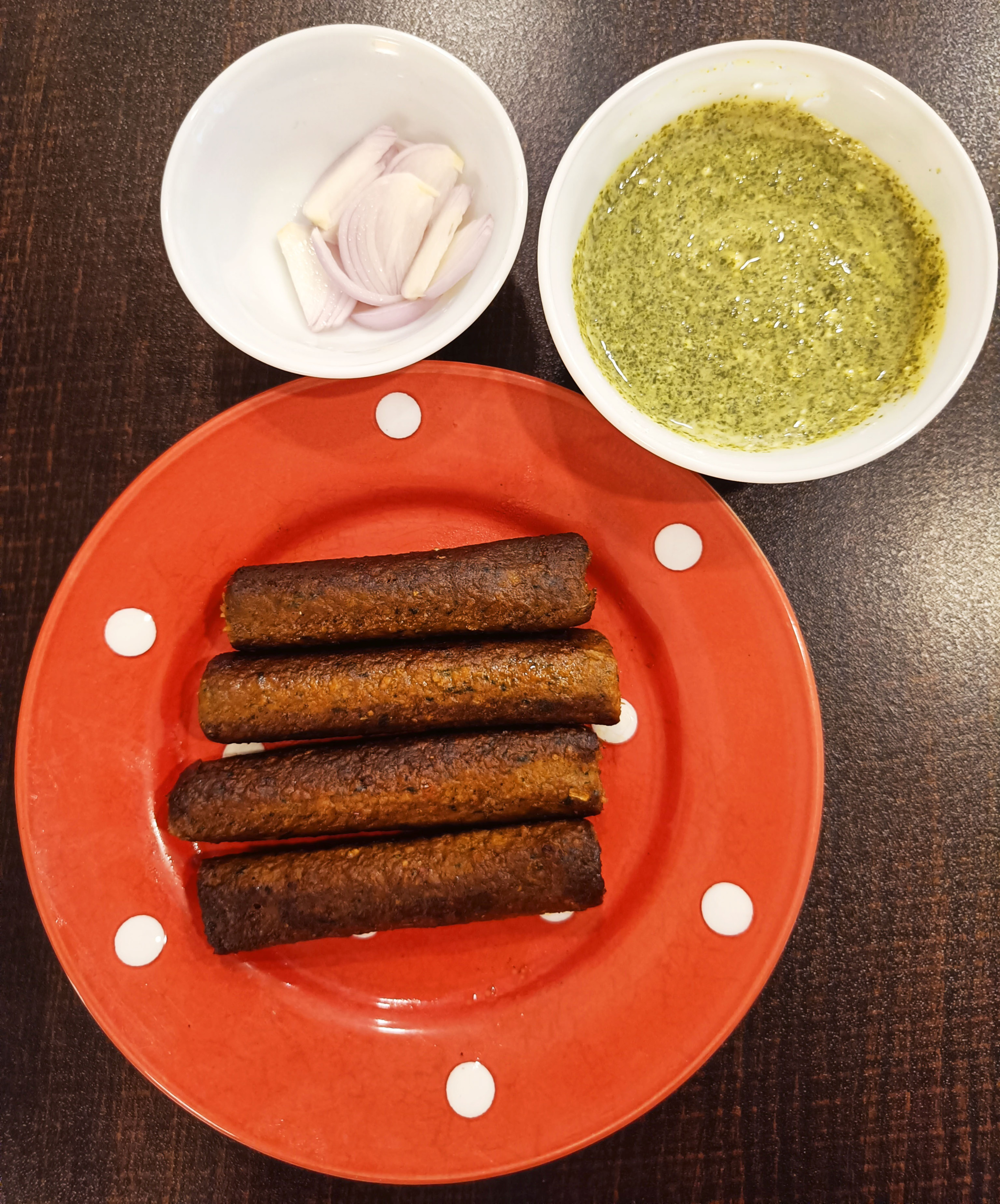 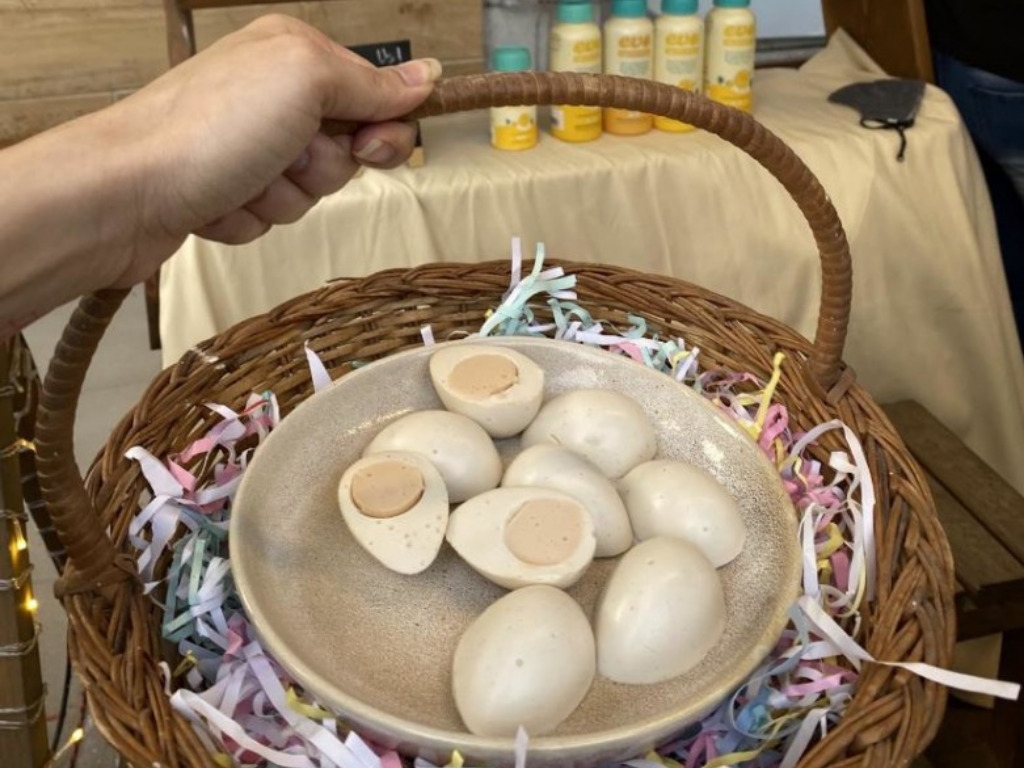 These egg-white patties are made from plant protein and are rich in calcium. From the brand, we received two flavours of this newly launched product: plain and peri-peri. The brand is launching in India shortly, and meanwhile, is featured on the menu at Mumbai’s Cafe Mondegar.

I decided to make egg burgers — not my usual preference when mutton or beef patties are available, but a tasty one nonetheless. I dredged the patties in seasoned flour and pan fried for a bit of a crust, then melted some cheese on top. I didn’t try it this time, but it would be simple to crumb-fry these patties for a nice, crispy sandwich — a perk you don’t get with regular eggs. In a toasted burger bun, I assembled one peri-peri and one plain patty with spicy mayo, mustard, lettuce, tomato, and onions.

The result was a yummy, satisfying sandwich. Of course, it’s hard to go wrong with a burger when your toppings game is strong. The patty’s protein is comparable to a meat-based burger, and the calcium is a bonus. It had the soft, bouncy feel of boiled egg white. Even though I seasoned them with black salt, the patties didn’t really taste like eggs. They are meant to be egg whites, which don’t have a lot of flavour anyway. The peri-peri one had a bit more zing to it.

I missed the runny yolk I’d have in an egg sandwich, and there’s a slightly chalky aftertaste. That didn’t stop my boyfriend and me from polishing off a double burger each. But as someone who would rather eat a whole egg, I figure this product isn’t really meant for me. It feels like a fun option for kids on a plant-based diet, and a healthy one for those with cholesterol problems. The patties are satiating and versatile, suited to any recipe calling for boiled eggs, paneer, or tofu. 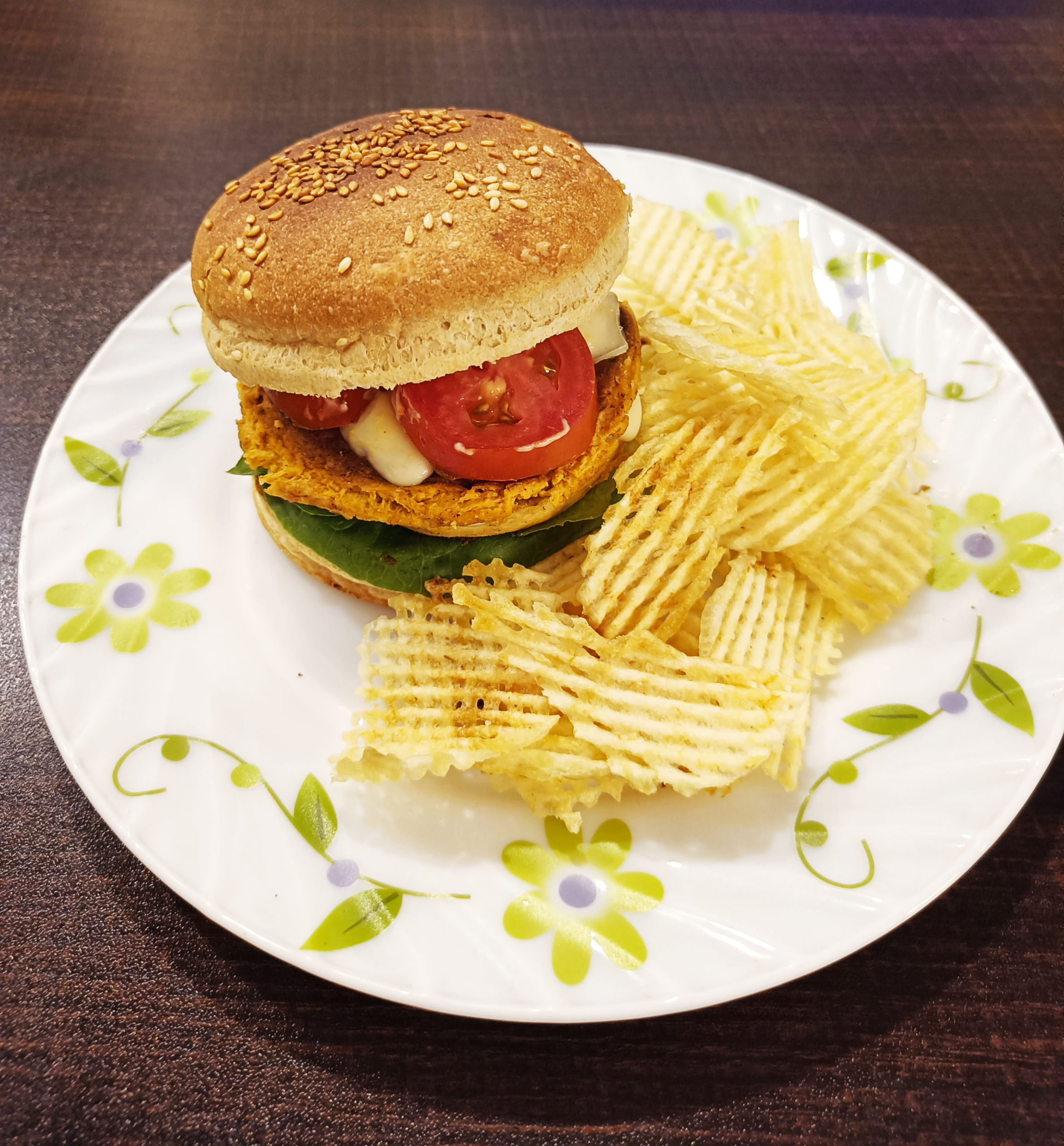 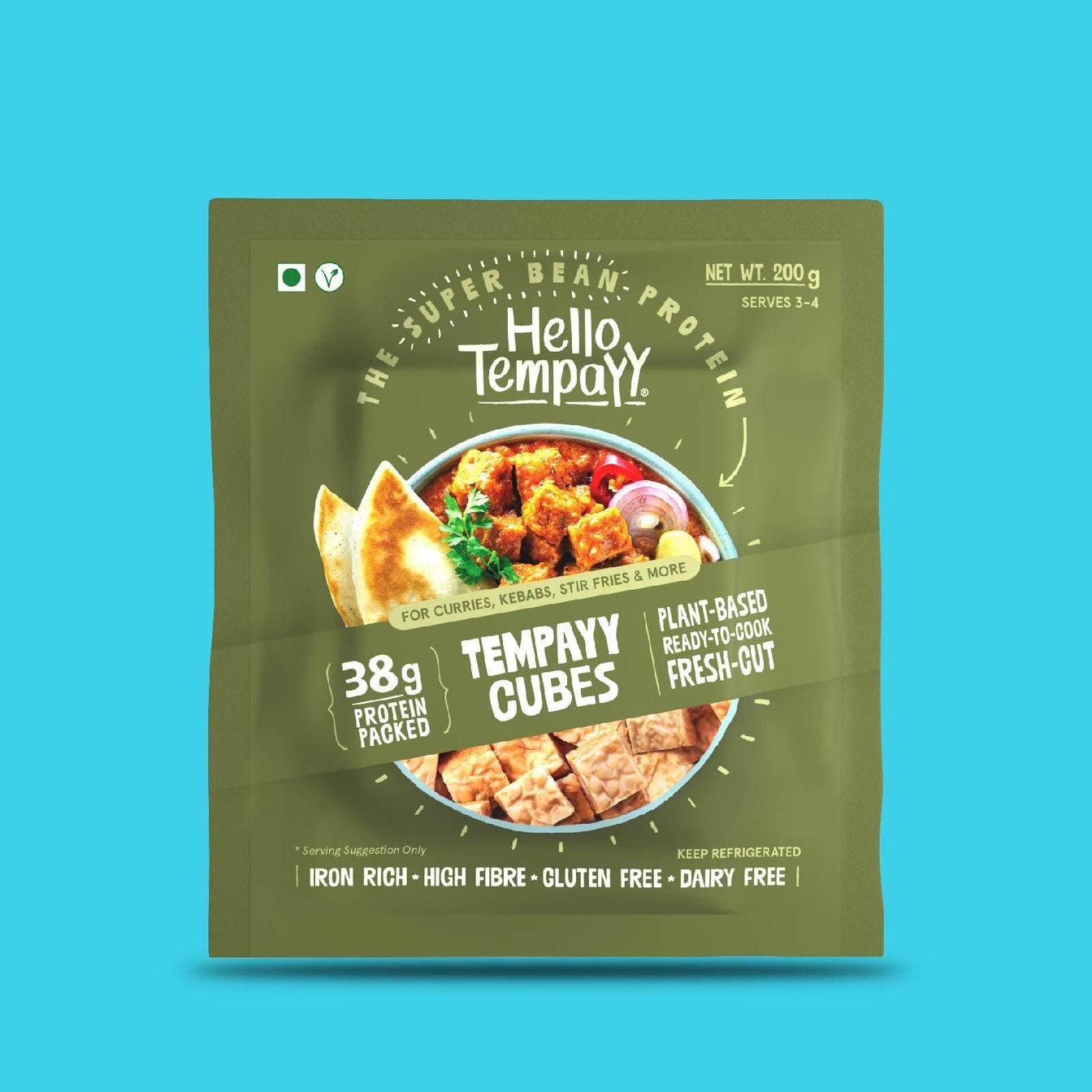 I cook with tofu regularly, so I had high expectations from tempeh. I’ve had it before, and this particular brand has a range of flavours like tawa masala and sriracha. The peri-peri was too salty for my taste when I’d tried it previously, so I opted for the plain version to use in an Asian-style dish.

As soon as I opened the packet, the smell was more complex than tofu — nutty and with a savoury, yeasty note that spoke of its fermented origins. Tempeh is supposed to be gut-friendly thanks to probiotics, and high in protein and iron too. I had some homemade Thai green curry paste in the freezer, so I decided to combine it with flat rice noodles, tempeh, and vegetables. I julienned bell peppers and purple cabbage, and added fresh moong bean sprouts to the bottom of the bowl.

I’d planned to make a green curry soup, but my boyfriend was on duty boiling the rice noodles and got a little overzealous. So we ended up with a drier, noodle-forward dish. Searing the tempeh cubes in some green curry paste would have made a tastier addition to the noodles.

Not that the tempeh itself was lacking. Although the noodles were quite tasty, the combination of tempeh and raw sprouts felt a bit too virtuous. The vegetal crunch would have been welcome alongside the richness of chicken or prawns; I was surprised to find that tempeh doesn’t soak up sauces as well as tofu. Plus, it has a more distinct flavour of its own (try these six mock meats that taste like the real thing).

I wouldn’t make this exact recipe again, but would definitely buy the tempeh. With a little marinade, these cubes would be great in a stir fry or sautéed as chakna even if you’re not planning to transition to a plant-based diet. The taste is pleasant all on its own, savoury and satisfying. If you’re less sensitive to salt, you could take a shortcut with one of the pre-packaged marinades for ₹20 more. This 200g pack made four hearty servings. 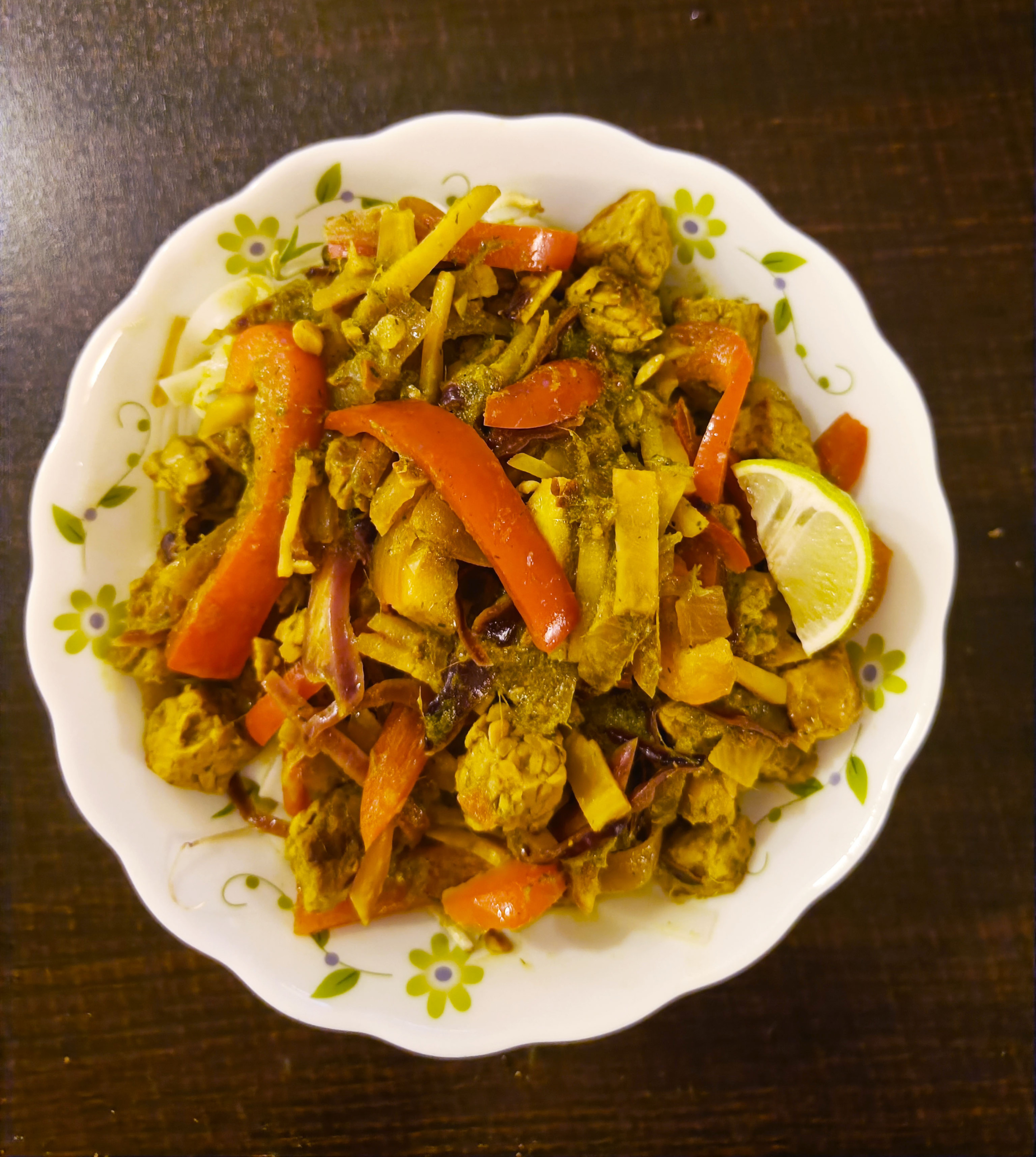 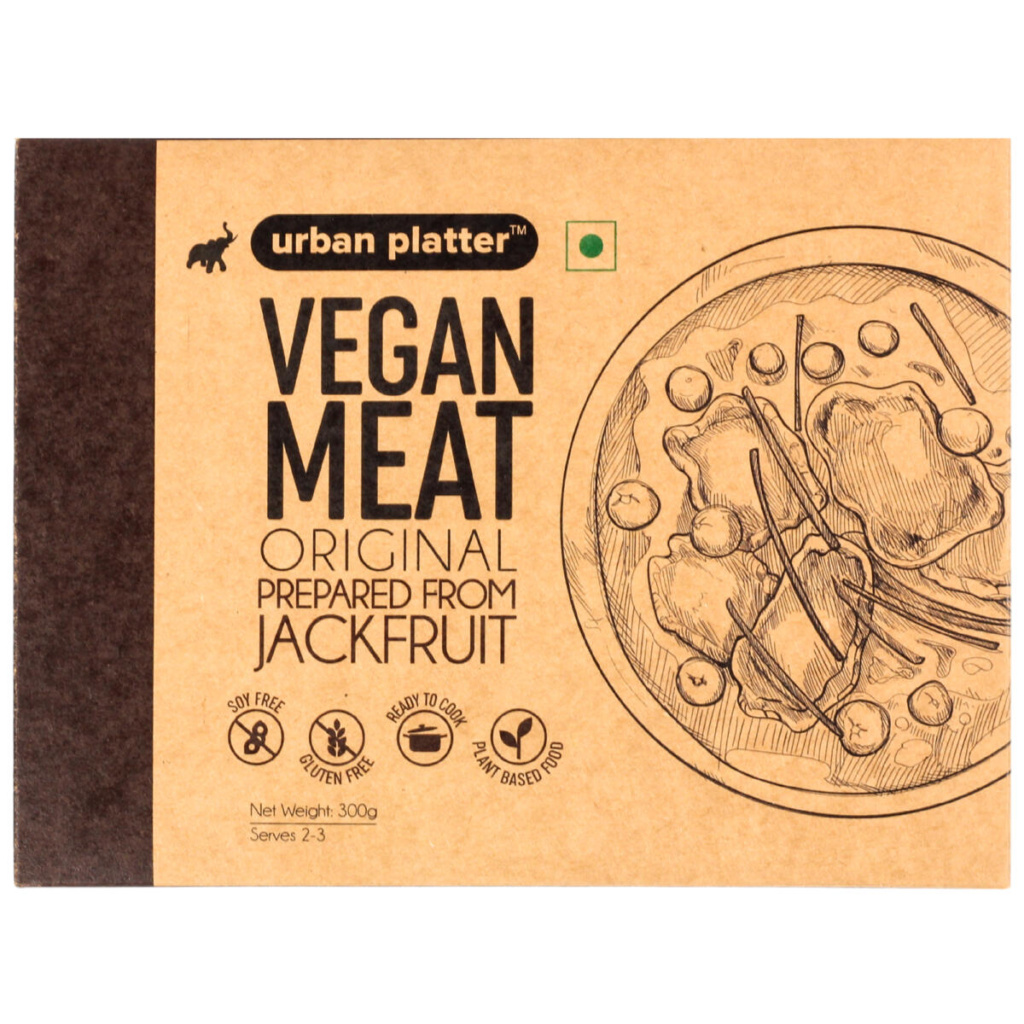 The humble jackfruit has long been a star of Indian curries and sabzis, and Urban Platter has a Malabar curry flavour as well as barbecue, presumably to mimic pulled pork. I thought I’d learn from my successful burger experiment and go with good old junk food to give the jackfruit a fair shot. Armed with a bag of tortilla chips in my pantry, I settled on pulled jackfruit nachos for the finale of my plant-based diet experiment.

Reader, the nachos were to my taste, and how. After inhaling three platefuls, I’m moved to offer you a plant-based diet winner that’s sure to be a good decision.

Mash up a ripe avocado with the juice of a lime, salt, and cumin powder. Stir in a diced tomato.

We did make-your-own nachos at the table to circumvent the dreaded soggy chip. To assemble, plate up some chips with jackfruit, pour over queso, and top with a spoonful of guac and chopped green onions. 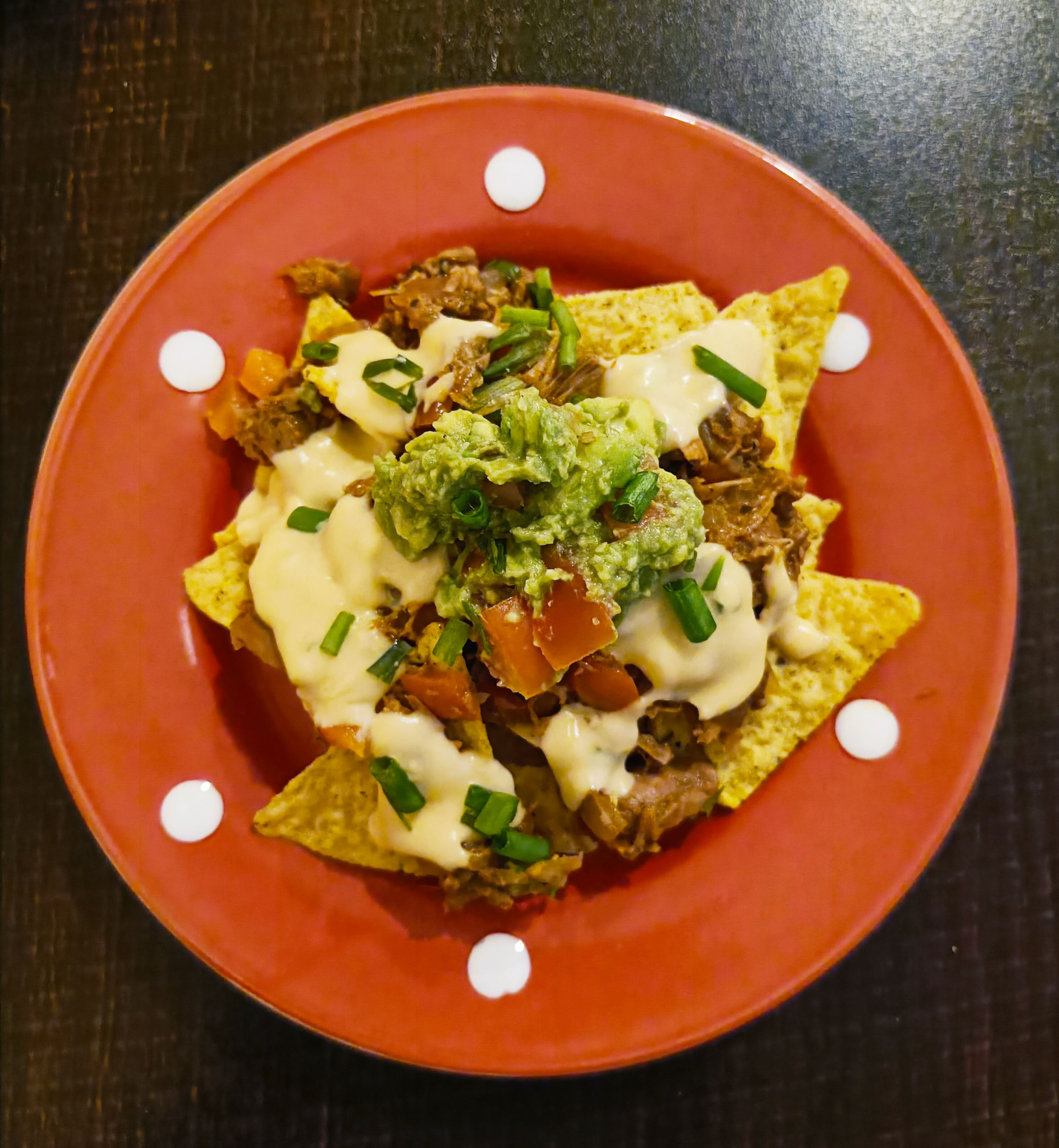 Is this a healthy meal? Well, it’s probably better for you than standard pulled pork nachos. The queso is the protein component here, since jackfruit, while rich in fibre and nutrients, has hardly any. In the grand scheme of things, it has plenty of vegetables, and you get to have chips for dinner. If you’re more health-conscious, the jackfruit would make a tasty filling for soft tacos or burrito bowls. I’m excited to try out more jackfruit recipes, since these nachos emerged the clear winner from this plant-based diet marathon.