Representative image: A still from 500 Days of Summer
by Rishika Singh Sex & Relationships

It's official: everyone's confused about situationships

Our ancient ancestors, the hunter-gatherers, were polyamorous. Not as an act of rebellion against monogamist culture, but out of need. “These overlapping, intersecting sexual relationships strengthened group cohesion and could offer a measure of security in an uncertain world,” says Christopher Ryan, psychologist and author of Sex at Dawn. Then how did we go from free love to being faithful monogamous partners? The answer lies in humans losing a kind of (very horny) papillae from their penile members, found in our chimpanzee forefathers that made us — you guessed it — uncontrollably raunchy. If statistics about modern dating are to be believed, these papillae might be back with a vengeance now that a new kind of polyamorous relationship is on the rise: situationships.

Okay, so maybe there’s no backward evolution in the works. But a 2021 report from Tinder does point to 62% of the Indian population looking for open-ended relationships rather than committed ones. Fast forward to their Year In Swipe report, 2022, and you’ll spot a 49% increase in members adding ‘situationships’ to their bios on the dating site. (Read how this writer’s sojourn into the online dating world went before you make yours.)

What are situationships and why is it trending?

Situationships are defined as an emotional or physical entanglement with someone without making a formal commitment to them. There’s the traditional relationship, the talking stage, the booty call, the friends with benefits, breadcrumbing, ghosting, and now the situationship. You might think I’ve pulled these new dating term out of Pandora’s box of evils just to confuse you, but I promise that’s not the case.

Where friends with benefits is a sexual hookup, situationships imply emotional ones. It’s that grey area between being in a committed relationship and being just friends — who may or may not occasionally hook up. Think of 500 Days of Summer and Summer’s and Tom’s equation; they were in a situationship before the term even existed.

According to Dr Aman Bhonsle, relationship counsellor and psychotherapist, physical intimacy may or may not follow later but the emotional connection with your partner is what takes the front seat in a situationship. 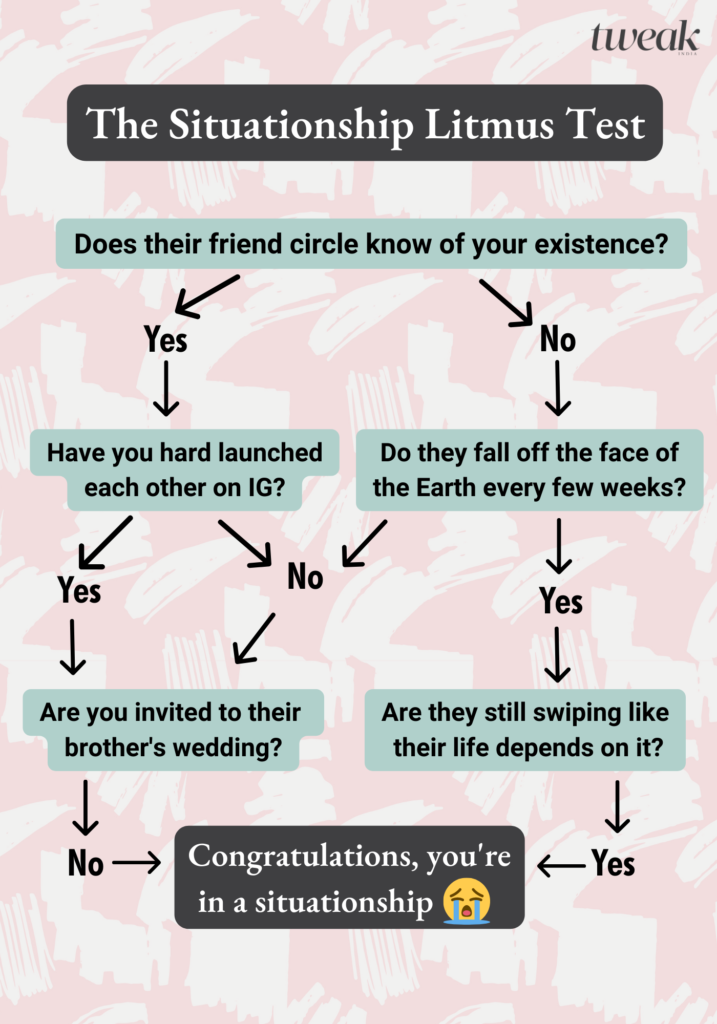 Psychologist Dr Nisha Khanna explains this shift from sexual to emotional needs as a reaction to the loneliness pandemic caused by COVID. “If you were not able to get the emotional support you needed from your surroundings at the time, you’re now seeking it from a partner.”

According to statistics, there was a 3X surge in the user base across dating apps during COVID. When Indians first started dating, it was about finding a partner to get married, Bhonsle says, and now it’s become one of the activities you occupy your free time with, like Netflix or online shopping. “As a result of this, sex also does not acquire the socio-cultural centre stage it once had but is more like scratching an itch out of your system,” he adds.

Because sex is readily available, emotional connection is valued higher now, by both men and women. Drishti J. Verma, a 23-year-old behavioural researcher and Abhimanyu Rana, a 22-year-old student, both agree that they put bonding emotionally with a partner higher on the merit list rather than matching their sexual frequencies.

For those seeking this emotional attachment without the pressure of adhering to the usual norms of a conventional relationship, situationships have been a godsend. Lamiya Chitalwalla, a 27-year-old marketing professional, realised she didn’t want to be in a traditional long-term relationship nor did she want to date or hook up with someone casually when the term situationship entered her life. “Because life has become so fast-paced, I barely have the time to invest in a conventional relationship. I like that situationships are the perfect blend of a long-term relationship and FWBs without having any of their cons.”

According to psychologist and trauma expert Prachi Vaish, COVID has made us hyper-aware that life is fleeting so we’re pushing ourselves out of the usual boundaries we would force ourselves into. “Post-pandemic, our lives have become nomadic. You don’t know if you’ll be in the mountains the next month or four continents away, and you don’t want to be tied down because of it.”

Tinder’s relationship expert Chandni Tugnait agrees, saying that this disinclination towards settling down and following a linear structure is why people are embracing situationships as a low-pressure way of getting to know someone else. 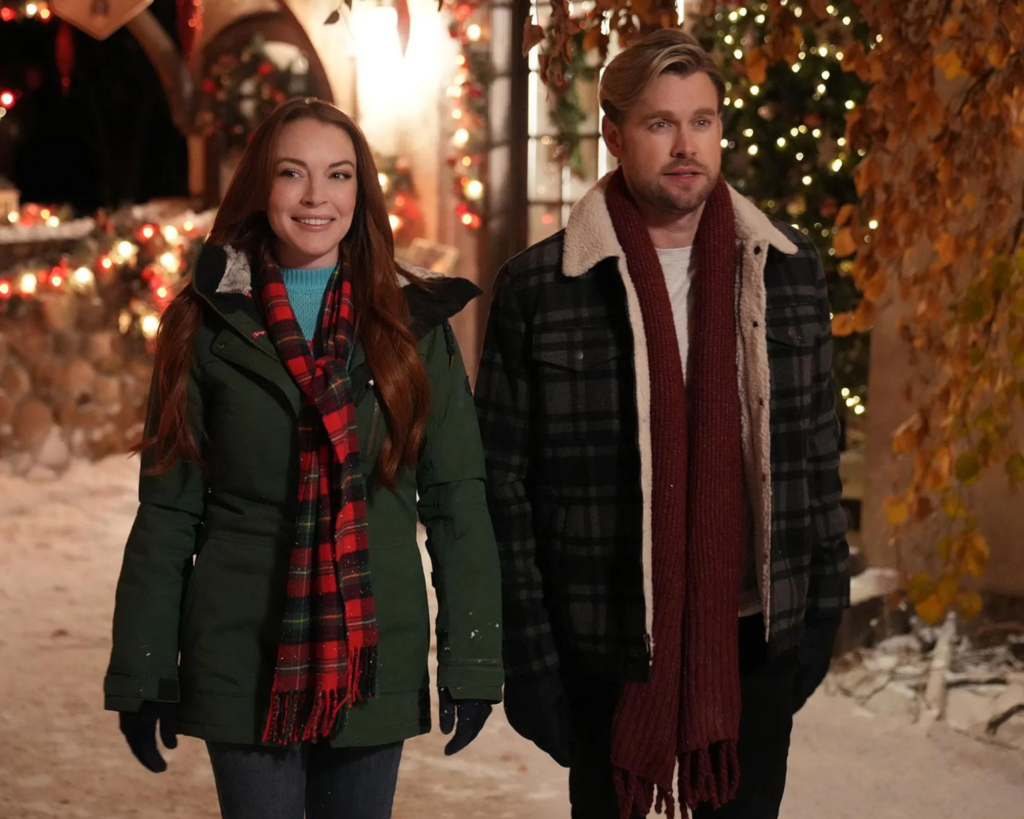 While embracing the lack of rules in a situationship can be gratifying, you need to be careful you’re not slipping down a slope like Lindsay Lohan in her new Christmas movie. There’s no guarantee there’s going to be a knight in an ugly festive sweater to catch you down below.

Instead, you might find yourself walking on eggshells like Mithila More, a 20-year-old marketing professional, even after being in an almost-year-long situationship. “I had developed feelings for him but I didn’t want to broach that conversation because I was scared. On top of that, I had assumed we were exclusive and later I found out we weren’t, or he wasn’t.”

According to Mehezabin Dordi, a psychologist at Sir H.N. Reliance Foundation Hospital, dating has become a “partner-shopping trip”, as if you’re swiping through products on Amazon or Flipkart. Because we’re inundated with choices, we’ve become trigger-happy about putting an end to a situationship and jumping into a new one, especially because of the lack of commitment involved in them. It’s likely you find it more difficult to walk away from your favourite meal at McDonald’s than from your situationship.

In the face of this adversity and with the realisation that situationships too often leave at least one party’s heart magnificently disintegrating into microscopic particles, you might ask, is it even possible to have a healthy situationship? It is, according to Pallavi Barnwal, sexuality and relationship coach. “You may have bought the car but you must also learn how to drive it successfully.”

How can you have healthy situationship?

Know what you can and can’t expect from a situationship 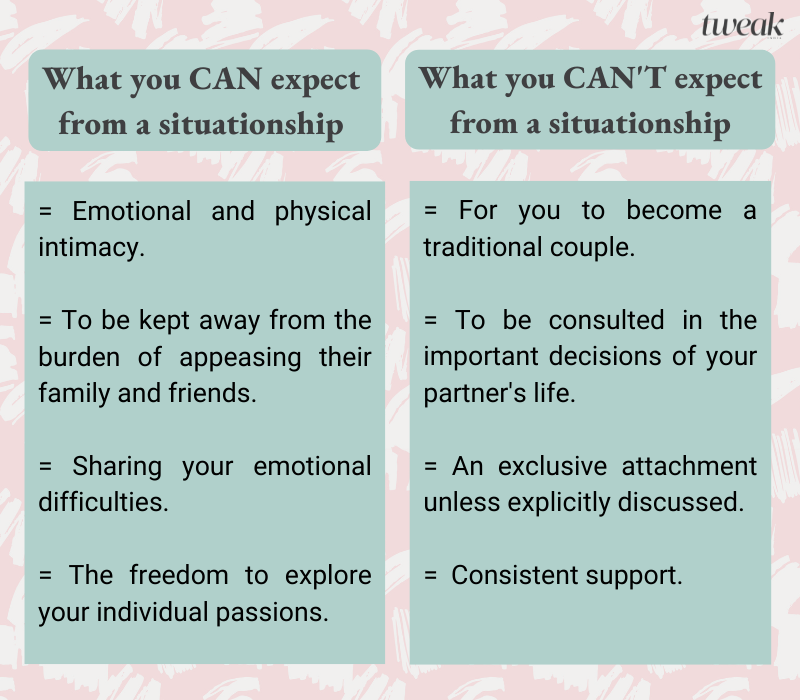 23-year-old actor Ritvik Khanna was in a situationship that ended badly because he was leaving the country and wanted to end it but his partner thought it could become a full-fledged relationship. The first thing you need to gulp down like a kadha is that a situationship is not a rest stop on your way to a conventional relationship. Barnwal suggests questioning yourself if you’re someone who wants to work on your momentary happiness or long-term, as situationships are more about instant gratification.

Rana is adamant that even though he may have an emotional bond with the other person, he’s not liable to provide them with consistent support. Neither should you expect to be consulted in their life’s decisions, or for the situationship to be monogamous unless both of you have explicitly discussed it.

Rana says,”In a traditional relationship, your friends are involved in everything you do but situationships are the exact opposite and that alleviates a lot of pressure for it to be perfect.”

You can also expect to have the freedom to explore your individual passions and interests without having to factor in your partner.

Have attainable goals of what you want from the situationship

Sonika Jha*, a 24-year-old journalist was in a situationship, which ended unsuccessfully because the lack of clarity was anxiety-inducing for her.

According to Dordi, you need to go back to the basics and understand your own core values. “Identifying these core values and non-negotiables should come from what you already live by.” Don’t make up lofty ideas in your head about what you think you might want but look at how your relationships and situationships have panned out until now to understand your needs better.

Lay everything on the table

Keith D’Souza*, a 24-year-old tech consultant, wants to be in a low-pressure relationship but isn’t drawn to situationships because of their usual lack of proper communication. Vaish says this gap needs to be bridged if you want to have a healthy situationship. Put your cards on the table and openly discuss what you’re both looking for. “You must validate and confidently own your feelings once you know them,” she adds.

There is no need to shame yourself for wanting what you want, whether it is an emotional or physical connection. If you like aglio e olio and I like rajma chawal, what’s wrong with that?