Is there a right way to break up with someone?

Can you stay friends? Do you return his hoodie? Experts answer the key questions about the right way to break up.

Have you ever tried to bathe a cat? It’s an experience that a rare few coast through seamlessly, coming away with a deeper bond and enough funny photos to achieve Instagram fame. For everybody else, it’s a WWE cage match. There’s screeching, yelling and tears of pain as you claw your way out of the bathroom, decorated with scratches and streaks of blood. It’s a painful process — emotionally and physically — that can change your outlook on life. Like trying to find the right way to break up with your partner.

Effectively ending a relationship in an amicable manner is an art form. It’s a challenge to find the right moment and technique to break up, given what an emotionally charged experience it is for everyone involved.

“It’s human nature to want to protect yourself first in such a situation. That’s our stress response. But to be empathetic and kind to the person who we once loved and cared for, we need to put ourselves in their shoes and see how our words might affect them,” says therapist Nishita Khanna.

Heartbreak sucks, but another layer of pain gets added to depending on how the person ending the relationship behaves at the end, according to psychologist Prarthana Ahluwalia.

The right way to break up, she adds, can change from situation to situation, depending on your history together. But considering that this is a person you once cared for – whether it was a truly, madly, deeply kind of filmi love or someone you’ve known for 2-3 months – there are things we can do to ease the process of heartbreak, letting go and moving on.

Make it a clean break

It’s going to sting and guilt will weigh heavy on your heart. But the experts suggest having a plan of action and wrapping things up quickly. “It’s best not to drag things out. The kindest thing you can do is be direct, collect your things and go,” says Ahluwalia. The longer you stick around, the more likely it is that you’re indirectly (or directly, in some cases) suggesting to them the possibility of reconciliation.

You’ll feel like hanging around, to make sure they’re doing alright, getting into the nitty-gritty of where things went wrong and what you wish they did differently. Khanna insists this won’t help, but probably prolong the torture.

Diksha K ended her year-long relationship in one night. “I was straight up with why I felt the relationship had to end. I gathered my belongings from his house and returned his keys. I had to make it known that the chapter was closed. It was the right thing to do.” Friends told her she rushing the breakup, being a bit harsh, even. But she saw kindness in ending the matter as fast as she could.

“Me hanging around him and his place, then going another day to get my stuff and swap clothes just seemed like I’d be causing more pain. I think being a little cold and curt then, helped us remain friends.”

We’re not saying make a list as Ross did in Friends. But before sitting down to have the ‘talk’ you should mentally prepare (and know for certain yourself) why it’s not working out for you. We don’t want it to turn into an argumentative tu-tu main-main. Things get ugly really fast when you make things personal.

You’re not attacking their character, even though it may be a habit of theirs that has contributed to your decision. “Focus on the specific problems, without accusations, as to why you don’t fit well as s couple,” says Khanna.

Perhaps you’re on different pages about when it comes to having children. Maybe you’re organised and punctual while their lifestyle is more laidback, which gives you too much anxiety. In the long run, such a match might head to a destructive end. “There should be no name-calling, it turns things sour for both people. You don’t want to leave them in the dark wondering what went wrong either.”

Keep the breadcrumbs to yourself

Your mind is made up but you don’t know how or when to do it. You feel guilty about breaking their heart, so you keep pushing it. But what’s worse is leaving breadcrumbs of bad behaviour to strain the relationship long enough that you end up pushing them into ending things with you.

Arundhati* noticed a sudden change in her ex-partner’s behaviour. He’d make comments about ‘studies’ he’d read saying humans aren’t monogamous by nature. Other days, he’d ask her if they’d stay friends if they ever broke up.

“He kept dropping these sneaky hints, some of them I registered, others I’m sure I missed. But it was making me crazy, every time I’d ask him what he’s going on about he’d just say nothing, and dismiss it like I was the one being hyper. I felt like he’s just pushing me to be the one who breaks up with him so he doesn’t have to be the bad guy.” She did eventually end the relationship after he had been unfaithful.

“I wish he had the guts to just do it. It would have been easier to be broken up with, rather than be cheated on.”

You can be friends with your ex… someday

How to be friends with an ex and bring boundaries into a relationship that had none is probably one of the most Googled relationship questions on the Internet. We get into relationships because of the love you shared and habits that united you, like being the only two people who enjoy dipping French fries into a strawberry milkshake. Those don’t disappear when the ‘relationship’ label does.

Those first couple of days, you’re going to ache to have your former partner around. But the right way to break up would be to completely cut off from each other, say 65% of the 1,795 Tweak readers who answered our poll. 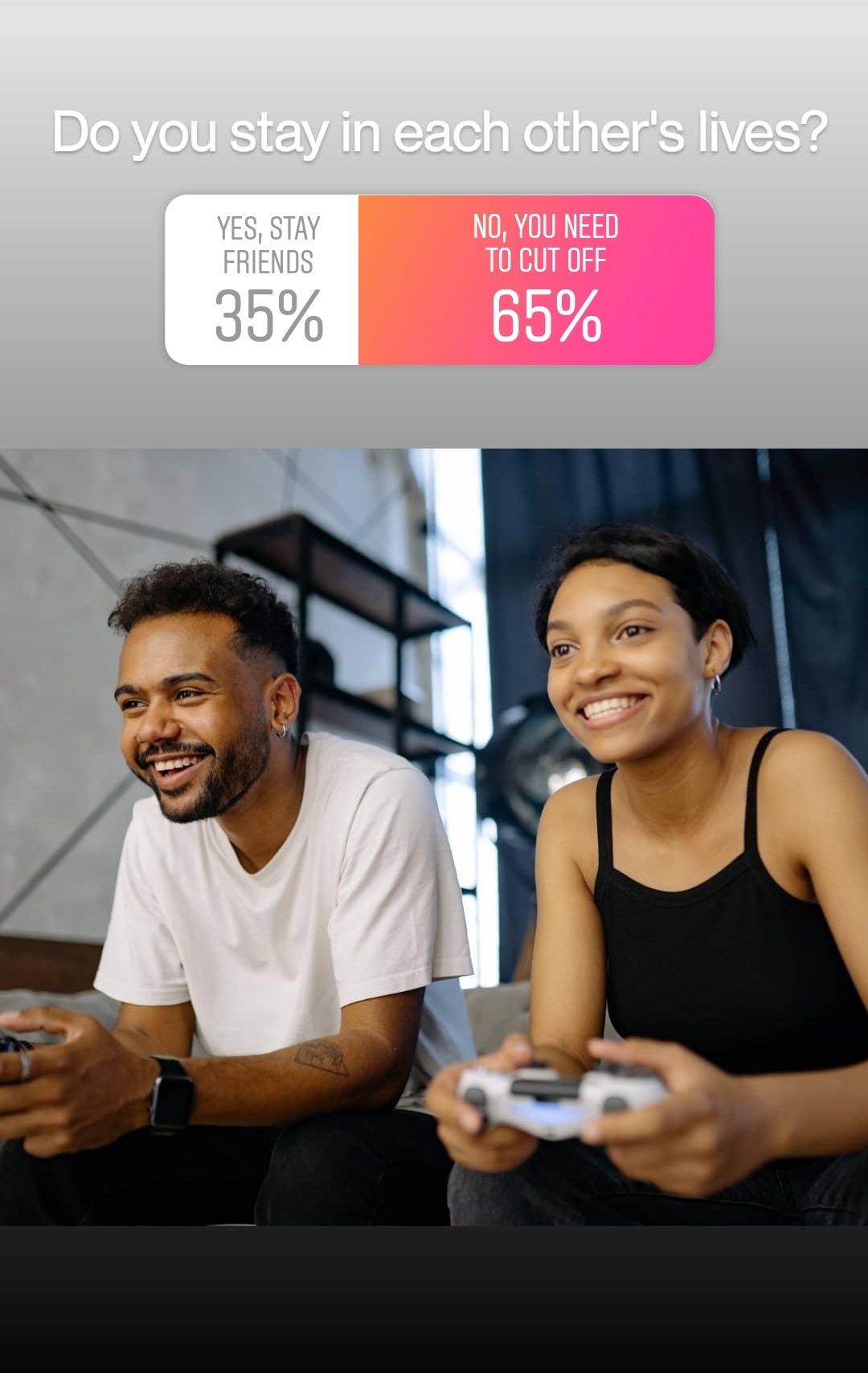 It doesn’t matter that you had made movie plans for next week or a friend’s wedding coming up that you RSVP-ed to.

Your relationship has changed. And it will take time for it to evolve into something else. “You may have verbally ended a chapter, but it can take a while before both of you mentally and emotionally catch up,” says Ahluwalia

She says that you have to be ready for the anger that they express. No one likes to be hated, but you probably will for a time and you need to be OK with that. Resist the urge to text them at midnight asking how their big presentation went at work, ask how their mother is feeling and if they want to take a drive, “just as friends”.

Take care of your emotions post-breakup

When all is said and done, it’ll feel like a weight has been lifted off your shoulders. But that’s also when your own emotions hit you hardest. You’re facing a loss. Whether it’s a person you once deeply loved, or just the comfort and support that the relationship brought to your daily life. Khanna says we need to allow ourselves to feel sad, even if we’re the ones ending the relationship. “You may be the initiators but you will still grieve. It’s something you need to mentally prepare for, have a support circle of friends and family around you and give yourself time to heal.”

It’s easy to plunge into bad distractions – whether from the feeling of loss or guilt. Especially if it was a toxic relationship, it’ll almost feel like you’re going through withdrawal. You’ll find yourself reaching for the phone but you need to remind yourself how difficult it was to end the relationship in the first place.

“Give yourself a period of recovery after it’s done. There’s going to be a major adjustment period depending on how long you were in this relationship and it’s important to take up new hobbies and friendships to stay engaged, instead of falling back into old patterns or going back to this toxic person.”